Hey there ladies and worms. Hotsauceman is here to tell you about the coolest space Mongolian ever. He is the most used character and now is the time to learn to fight with him and against him. I also promise no Star Trek jokes, mostly. Remember to check out Tactics Corner for more fun stuff. The White Scars are my favorite chapter. My Space Marines are painted up as the sons of the Great Khan. Unlike some people who like to play white scars, but not painted as them, I’m the real deal, baby. Khan is the captain of the 3rd company of the White Scars, a Company dedicated to hunting down enemies of the Chapter when they escape their wrath. Khan himself is the most bad-ass Khan ever, killing more enemies than any other who have held his position.

Khan is a favorite among Space Marine players for one simple reason: his flexibility and his ability to give a lot of his army scout. While scout is typically meh for one unit, for the entire army is it very good. If you are going second, you can move around to where you will not get hit. Or if you are going first and you can kill them hard and fast, scoot up 12 inches and go to town on them. The only danger is if you get seized on but with the impending GW BRB FAQ, you will be able to Scout move after the roll to seize which is extremely good for this army. Don’t forget that Scout gives them outflank as well. This means if you are going second against a powerful shooty army, you can reserve and come in on all sides. I cant tell you how good this is for Grav to get close without needing to move.

Now, Khan comes with some rules that make you think he is a close combat monster. He can be. But it comes with a stipulation: he cannot go after many of the warlords other armies have. Why? Because unless they are 1: Chaos or 2: no longer in a unit they can refuse the challenge. When I use Khan, he skirts the sides of the battlefield going after small, easy to munch units. Or he kills the last of some unit that survived Grav shots. He can kill warlords and once in a while, you will get lucky with a 6 and take out a critical model. Unless you can ensure getting the challenge and kill them, it isn’t worth risking him hunting some of the more powerful characters in the game. Use him to kill the chaff or slap him in a beefed up Command Squad and go hunting. 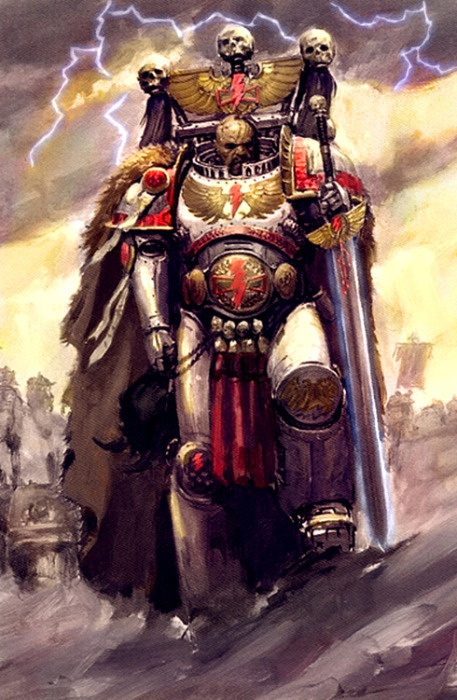 Now the hardest part of Khan is that defensively he is no different from a standard captain. What this means is the he will die easily. I find that whenever it put him on a bike, I’m guaranteed to have him die easily. Because bikes get shot off the board, and so does he. In close combat all he has is his 4++ to save him from those nasty weapons. So like I said, KEEP HIM AWAY FROM THE THICK OF IT! I almost always outflank him and whatever squad he is in. As stated above, the exception to this is running him in a beefed up Command Squad on bikes. There, with FnP and a Chaplain, the unit becomes pretty scary and can hit very hard, especially if you give the Command Squad melee weapons and/or Storm Shields to really crank up their durability.

With recent changes to how armies are built and how Chapter Tactics are now no longer shared across all chapters, Khan really belongs in a pure White Scars army. While allies are a staple of armies now, I feel as if pure armies tend to be the way to go now. So putting him in with Ravenwing or Space Wolves really isn’t the best use of his abilities. 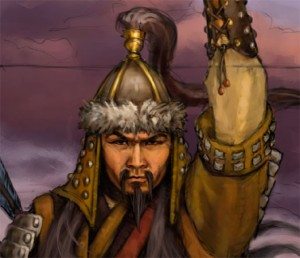 As to formations, he can be substituted in for any formation that features a Captain. There are whole articles on the White Scars battle company, of which he is a linchpin model. Suffice to say, Scouting free units packing Grav weapons is pretty scary. When playing White Scars Battle Company with Khan, remember that getting into position for the alpha strike is key. If your opponent has Servo Skulls or Infiltrators to block your Scout move, just bum rush them on the first turn and box them in. Let your free Rhinos take the damage and then shoot your opponent after you’ve gotten out. Khan also has a 12″ leadership bubble granting rerolls to help avoid getting stunned after a vehicle pops. You then are in position to let them have it! If going second, as stated, you can always outflank if you are afraid their alpha strike will be more than you can handle. Just be warry of massed interceptor as with Tau. The biggest conundrum for me has always been: what squad do I put him in? Obviously bikes if he is on his bike. But what types of bikes? Bike squads are cheap, but lack the ability to stay on the board in my experience. Command Squads are a good choice, where the kit they have access to can really increase his durability. When on foot though, I found the best is, ironically, Devastators. Why? Well they can sit in their Rhino, firing off their shots, while Khan sips tea safe in his meat shield, and gives them the leadership buff to not get pinned

Khan is pretty much only taken for his buffs, but I feel that he is great outside of that for clearing away small units or killing things that are weak. He may not be able to take on scary stuff in combat, but if you’re smart with him and know when to send him forward and when to bring him back, he can be pretty brutal. Near the end of the game he is pretty strong as well. As always,share your comments down below, and remember Frontline Gaming sells Games Workshop product at up to 25% off, every day.

← Start Collecting Age of Sigmar on a Budget!
Signals from the Frontline #454 →