Greetings my fellow nerds. This is Hotsauceman here to tell you about the most bad ass Tau character in the entire empire. The man, the myth, the legend: DARKSTRIDER. Remember to check out the Tactics Corner for more fun stuff. Don’t rely too much on my hints and knowledge as with it you’ll still lose to Frankie!

El’Myamoto is a Tau commander that is very unconventional and doesn’t follow orders. He is named after a famous Ronin from our own history. Ronin are Samurais without masters. He has refused promotion several times and wants to stick with his guys on foot. He is only tolerated by the Tau brass because he gets results. He is the loose cannon cop that always finds the perp. He also out-shot Vindicare assassin, killed a Warboss with a single shot, and blew up an entire mining colony of Orks! He is pretty boss. The thing about him is that he is not a unit that multiplies your force, as much as he multiplies the unit he is traveling with and nothing much else. He makes them a sort of Special Forces unit that is adept at killing. 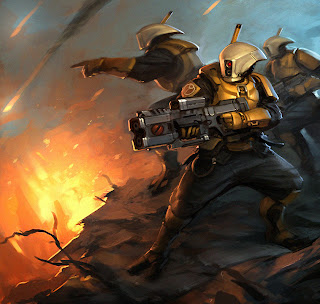 Clocking in at the cost of a single Thunderfire cannon, he is a pretty middling priced HQ. As said earlier, he can only join certain units. If you read my Pathfinder article, you would know not to put him in them because all he is then is an expensive Markerlight. Ok, so Breachers are a good choice? Yup, they are. He makes them quite good if they are in a Devilfish. Like really, really good. Scout up, next turn get out and shoot whatever you can. The problem is that they are a short ranged unit. Thus, you want to kill quickly and bugger out. Strike teams are fun too with their range. Take either Pulse Carbines or Pulse Rifles. These guys become very efficient marine killers, allowing you to wound on 2+. Not bad at all.

One way I used to play him is in a unit that I call the “Hunter-Killer” unit. Put him in a full unit of Fire Warriors, in a Devilfish, and allow it to Outflank. I typically bring it in the backfield and go after something important: units on objectives, tanks that are bombarding my backfield (Str 5 is good against a lot of light tanks) and other units. You also can kill some middling HQs and similar units hiding in the backfield. Heck, even the feared Elder Jet Bikes would hate this unit. Granted they will die after killing one unit, but hey, Greater Good and all that jazz! You can even kill a Stormsurge (maybe) with this unit if you get VERY lucky.

In a previous article, I mentioned Pathfinders should not take other weapons than their stock gun. This guy is the exception. With his -1 toughness, their special weapons become all the more terrifying and Pathfinders become a decent killing force. As stated, they are not the ideal unit for him to go in, but if you want to make a cool, fluffy unit, they can suffice in a pinch. Rail Rifles can now cause Instant Death to anything that is toughness 4. Ion Rifles can kill models models with toughness 5 and lower. he makes them much more efficient.

Now, there are no formations that utilize Darkstrider in any way. Also, with the recent FAQ he cannot benefit from any formation. But those that are in formations can benefit from his abilities. Take for example the Counterstrike Cadre. 3 Strike/Breacher teams and a Pathfinder team all in Devilfish. Not the best formation, but a fun one. All models can re-roll failed to hit rolls versus models within 3” of an objectives. So while he cannot take advantage of the re-rolls, the units can take advantage of -1 toughness. Twin linked firepower vs a target unit with -1 toughness can be very devastating.

Darkstrider is more for casual and narrative games than any other HQ in the book. While his tricks are fun, those points can be spent on specialist units. He is really hamstrung by his inability to join anything but Firewarrior squads. If he could join other units, you would see him more often. Remember so share your comments down below, and as always Frontline Gaming sells Games Workshop product at up to 25% off, every day.