The Storm of Silence is a 2 day Major ITC event held at Gamer’s Haven in Spokane Valley, WA. I went with a crew of folks from Portland and Corvallis and we carpooled our way there and back, hoping for glory, talking shop, and generally having a good time.

Gamer’s Haven is a really great game store with a large supply of a variety of games, a huge gaming area in the side room and another gaming area upstairs. Bob has done a great job of making it an excellent place to come and play. 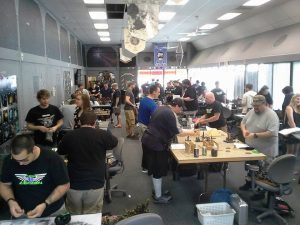 A lot of the tables had some very cool themes and looked good. My one critique is that there wasn’t enough line of sight blocking terrain I don’t know that any of my tables had it. He added a ton more tables for the event to make it Major, so it shouldn’t be too hard to add some more line of sight terrain next year if he mad that his goal. 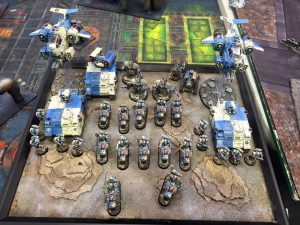 In my personal side business I recently came upon a gorgeously painted Space Marines army. Wanting to know more about this side of the second hand business, I shelled out a pretty penny for this lot and it has been in my garage listed on eBay for a little while. I’d been itching to play with it and see what other people thought of the scheme, so I created the best list I thought I could with what I had. Here is my 1850 with what I had Nova Scars.

Not the best list by any means, but I thought it had some tools to compete with all the ignores cover. It might catch some people off guard. I hoped to do well in painting and honestly set a goal of 2-3 for the event. 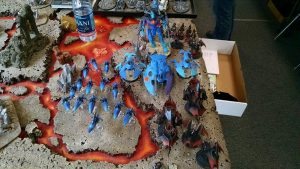 My opponent Allen had a Farseer, Scatbikes, Warphunter, Wraithknight, 2 Hornets, 4 Venoms, and 2 Ravagers. I went first and had a great first turn of shooting, taking out the Wraithknight, a unit of Scatbikes, a Ravager, and a Venom I believe. But Eldar shooting would not be denied! That Warphunter was MVP for him as he peppered me over and over with his main gun. In the end I was able to take it in a very close game that was a lot of fun. Win with 7 points. 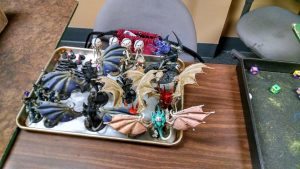 My second game was Tyler with 5 Flying Hive Tyrants, a Mawloc, Lictors, and Mucolids. I was also going second! Crap! I was pretty worried going in as I didn’t think my 2 little birds could take out his organic air force. I got really lucky one round when I killed two Hive Tyrants with some ignores cover grav shots and another that crashed and took of his last wound. We went back and forth in another close game and ended up with a tie. – 5 points. 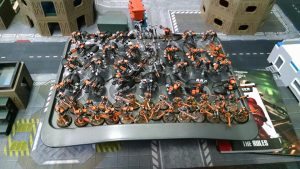 My third game had me against Chad from The Heroic Intervention podcast. We’d played a few times before at Guardian Games and Chad is a great guy. He had Necron Decurion with Zahndrek 2 x 10 Warriors 5 Immortals 3 Tomb Blades and double Destroyer Cult. Woof. Tons of ap3 and 4+ reanimation was going to be rough. I was going first but got seized on and lost 9 out of 10 bikes first round. Gulp! I did my best and pushed forward but lady luck was not with me as Chad made a good amount of 4+ reanimations and my Chapter Masters did things like loose their last two wounds in overwatch. Still a good game and Chad was fun. Loss with 5 points.

Day 1 wasn’t too bad 1-1-1 for my aspirations was right in line and I was one win away from my goal. I had a lot of good compliments for my army and it was fun to see it get the attention it deserved. It was also fun to play such a nicely painted list. I’m not the best painter and ceratainly not the worst, but this army blows away anything I could possibly do. 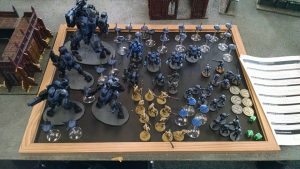 Game 4 had me against Tau and a Stormsurge! First time with this bad boy but I felt I had the tools to take it on. First turn I launched both orbitals at his marker drones and Commander with drones, but couldn’t clean them out. Turn two I fired everything into the Stormsurge and got it too one wound. I rushed my Chapter Masters at his Ghost Keel squad and he did a good job of blocking my paths and making my charges hard to get which paid off in the end. Another close game that I had a good chance of winning, but couldn’t pull it out. Loss with 4 points. 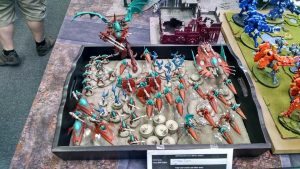 Eldar again! Blergh. This time I was playing Chris whom I had played against at the DMB brawl. He had Farseer, Scatbikes, Wraithguard in Wave Serpent, Wraithknight, Vauls Wrath D-Cannons, Vyper Squadron, Aspect Host with 2 Swooping Hawks and 1 Warp Spider squad. My dice hated me this game. I had a perfect shot first turn on his Farseer and bikes with two Orbital Strikes and 3 lascannons and 3 missle launchers going after it that ignores cover. Both Orbitlals wiffed, but I did kill the scatbikes. A lot of the game was like that with the next turn having me pour everything into a Wave Serpent and not able to kill it, only doing 2 hull points. That’s dice! Just couldn’t catch a break. Loss with 2 points.

So I didn’t make my battle goal, but I did make my painting goal when my army won Favorite Army and a $100 gift cert! That was great and went immediately into the eBay listing. It was a ton of fun to play and this army would serve a casual player very well. It needs some work to be competitive, but it was still fun to play and look at. 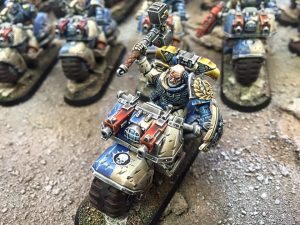 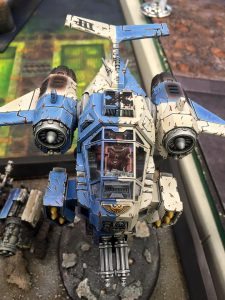 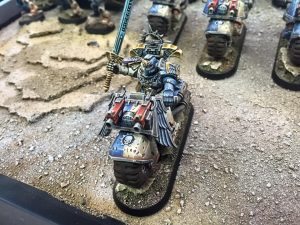 Team0Comp did well at this event winning 1st – 4th in battle and me winning Favorite Army. It was a good event and we had a great time hanging out and shooting the bull. Gamer’s Haven is a fantastic game store and a real gem in that community. Check it out if you are ever over there.

Will say that the chapter master could only have one relic. So either Hunter’s eye or the shield eternal but not both.

Not quite correct, you can take multiple Relics on a single character, but you can only take Relics from a single source on an individual character. So he would still be prohibited from taking both the Shield Eternal and the Hunters Eye on the CM because they’re from different Relics lists.

A lot of people have been making this mistake, recently.

Yeah I think every event I run one of these occurs. I usually check for it when lists are turned in but missed it this time.

Wish GW was consistent with relics and their exclusionary text, its hard to keep track of when some codexes allow multiples and others don’t.

Yeah, some uniform rules would go miles to helping alleviate the confusion in list writing.

In the Angels of Death supplement it says You can take items from both lists in the detachment. so if he was using the Angels of death supplement rules then he could take relics from both lists. In fact many of the new soft cover supplements are allowing a mix of relics. The Ork Waagh! Ghazghkull supplement allows this as well. Black Legion and Crimson slaughter allow the mixing of relics too. This is a new and subtle change to the codex updates that I think many people have overlooked.

It allows you to take from multiple relic lists in a detachment but the source of those relics still says you may take one of these relics. A model can only take one relic even if he has access to two lists of relics. The orks were the first to have this rule and every codex after them except tau has had it too.
In the supplement it actually says they can take from the supplements relics “instead”.
So no to multiple relics on one model.

Angels of Death just says you may select from these, only one per Army. It doesn’t have the one per Model restriction that the base Dex does. The CSM Supplements and Champions of Fenris are the same way.

From the ITC FAQ “A single model may only be armed with one item from the list of Chapter Relics.” That was before the new angels of death relics came out, but I would still interpret that as one relic per character.

The relics from specific chapters are just a list of relics that replaces the list in the main book if you so choose but in the section where you go to see the rules on how a character can take a relic it says you can swap one weapon for one relic only. Angels of death doesn’t delete that.

Except that there’s nothing saying it works that way. They all just say that you may select items from this other list instead. There’s no indication anywhere that the limitation from the Armoury Page of the Core Dex is a thing for the Relics from the Supplements.

What won the event? Any chance of seeing top lists?

Jeremy Veyssiere won with a Tau army. I’ll have top lists and such posted up on Tues morning with my own report then.

That is a gorgeous paint scheme. And I know it is kind of silly to even bring this up in the state of the current meta but I guess I’ve been at this too long to not be bothered by the fact that Marines can field infinite Chapter Masters.

They have a timeshare, between the thousands of White Scars successor chapter abruptly discovered in the last year and a half.

They were probably wrong. There isn’t aproximately one Space Marine per planet, its more like one Chapter. Someone just forgot to include White Scars successors in the imperial statistics.

My fluff was that the Nova Scars have duality in mind and have two chapter masters to embody different aspects of their battle plan.

Those Novamarines are so damn pretty.

Exactly replace one weapon. Not all relics are weapons.

By that logic you couldn’t ever take relics that do not replace a weapon since it only says you can take one relic if you replace one weapon. Instead those special relics are exempt from replacing a weapon but you can still only take one.
Orks are clear on this and so are eldar.
No matter what though the list was illegal by accident.

Glad the army won! Hope you had a good time!

Thanks for sharing! Looks good, it’s hard to pull off those half and half paint jobs.

Thanks for the write up oh captain my captain! Happy to see you make it this way again.

Tanks! It was a good trip.