A tragically-undervalued part of the Tau codex, the Sky Ray is more than just a great way to shoot down airplanes and Rodans- it’s also your toughest Markerlight, the alpha strike king, and a Tau unit that won’t make your opponents hate you! Click to read on or check out the Tactics Corner for more strategy and reviews. 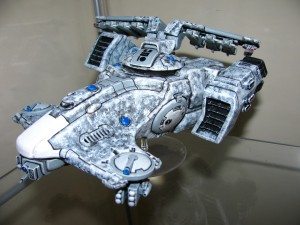 The Sky Ray is a very cheap chassis at 115pts and comes with a pretty good statline; as a Tank and a Skimmer it has access to an array of movement options and AV13/12/10 make it fairly resilient for a battle tank, especially as it is able to Jink for a cover save any time it needs to. Like the Hammerhead Gunship, it also benefits from BS4, which is a marked improvement over virtually everything else in the Tau codex- I couldn’t tell you why the only decent gunners in the Fire Caste go to driving school, but it’s a welcome bonus.

The Sky Ray’s armament is a bit unusual compared to vehicles in other factions and even those of the Tau- it’s primary weapons are six turret-mounted Seeker Missiles (S8 AP3 one-shot weapons) and two Networked Markerlights on additional, smaller turrets mounted on the main turret. It also comes with a pair of Gun Drones for backup, which can be switched for either a twin-linked Burst Cannon or twin-linked Smart Missile System for free. (Since the SMS is strictly better than the Burst Cannons, there is no reason to ever take the former.)

The Skyray also comes standard with a Velocity Tracker, something no other vehicle is able to get (though battlesuits can); this allows it to select whether or not it wants to use the Skyfire rule each time it shoots, giving it unparalleled flexibility in that respect. It can also take the normal Tau vehicle upgrades- the Blacksun Filter is an excellent choice, as the Sky Ray often wants to go for an alpha strike, and Sensor Spines (for Move Through Cover) or Disruption Pod (for +1 cover) are both often common add-ons, though I myself prefer to keep it cheap and simple.

As of the 7E book Sky Rays can also be taken in squadrons of up to three and if the size is maxed out, the whole unit benefits from +1 Ballistic Skill thanks to the Fire Team rule. However, since this tends to be something of a waste of firepower to fire them all at one target and vehicles have no equivalent of the Target Lock to allow them to split their shots as needed, not to mention that losing even one member of the unit will deny you the bonus, I doubt it’s something most players will ever see in practice. 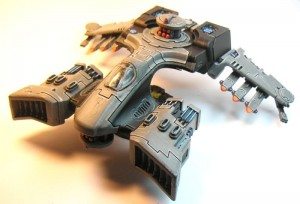 Unlike most anti-air platforms, the Sky Ray is not forced to dedicate wholly to that role thanks to its ability to switch in and out of Skyfire as it pleases- this means that even though it is somewhat imperfect as an AA solution, it is still more than acceptable in the role because it is extremely functional outside of that purpose as well. It often will launch all six of its Seeker Missiles early in the game to vaporize a key target if there are no flying units around that need killing; the Sky Ray excels at taking out most Monstrous Creatures (flying or not), since it wounds them on 2s and ignores their armor save- however, exceptionally-tough ones (such as a Riptide, Dreadknight, and the like) can often weather its fire, so be careful about choosing its targets. Medium vehicles (AV11-12) are another good target for its starting volley, though the vagaries of armor penetration and the vehicle damage table mean that it is far from guaranteed to kill them.

Even once its missiles are all gone, however, the Sky Ray is still a star performer. Two Networked Markerlights can not only contribute to its own initial barrage but can also be saved for other units as well- and as one of the most durable Markerlight platforms around it often manages to stick into the late game, since the prospect of firing at an AV13 target with a cover save is highly unappetizing for many opponents and thus it tends to get left alone. This is one of the biggest advantages of the Sky Ray: it’s just more trouble than it’s usually worth to go after, especially in an army that features other vehicles and battlesuits, which tend to want the same kinds of guns shooting at them.

Also, we should note the value of the Sky Ray’s Markerlights when it comes to downing enemy flyers. Even once its missiles are expended a Sky Ray can be a deadly threat to flyers and FMCs by virtue of enabling the rest of the Tau army; as Markerlight tokens can be used to improve the Ballistic Skill of units making Snap Shots, even just one or two Markerlights can vastly increase the chances of your other units getting a bunch of hits on a flyer. This is especially true for the many twin-linked guns in the Tau armory, so as long as a Sky Ray is alive enemy flyers have to consider every unit on the table a significant threat to them- no one wants to see a Railgun or High-Yield Missile Pod hammering their vehicle with full efficiency.

Finally, we shouldn’t underestimate the value of the lowly Smart Missile System that serves as its backup gun. Able to blast infantry within a significant radius as well as snipe sneaky models trying to hide out of Line of Sight on an objective or whatnot, anyone who has played against Tau will recognize the SMS as a very dangerous gun that bypasses most of the usual rules for shooting and can cut down infantry models of all stripes with surprising efficiency. 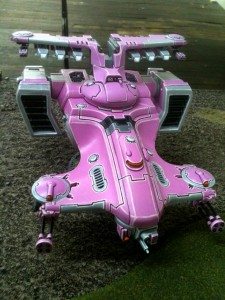 However, the Sky Ray isn’t without its weaknesses. Since it is not a Fast vehicle, moving even a single inch means that it is limited to firing a single weapon at normal Ballistic Skill- and for a unit that starts with nine weapons, that is a very unfortunate proposition. Even with its missiles expended the Skyray is unable to both move and provide effective Markerlight support, which renders it essentially static for the majority of the game- you might move/flat out it if it has to Jink or to claim a critical objective, but you will rarely be happy to do so and fast-moving melee units will find it easy prey even for a Tau unit. This problem is compounded by the relatively-short range of its Markerlights (36″), which can force you to place it much further forward than you otherwise might as you can’t afford to waste turns moving forward to get to the enemy due to the aforementioned static nature.

Though the Sky Ray is available in several formations (specifically the Armoured Interdiction Cadre and Skysweep Missile Defense Wing) neither are particularly effective choices and won’t be a high priority for most players. The Cadre is probably the better of the two, as its benefits help the Sky Ray a lot- rerolling to hit means it doesn’t need to use its Markerlights on its own accuracy, freeing them to be used for other units and letting it volley the whole set of missiles without worry. More notably the Sky Ray is not available as part of a Hunter Cadre in its “heavy support” options, so you’ll rarely see it except in a Combined Arms detachment due to the awkwardness of using it elsewhere. 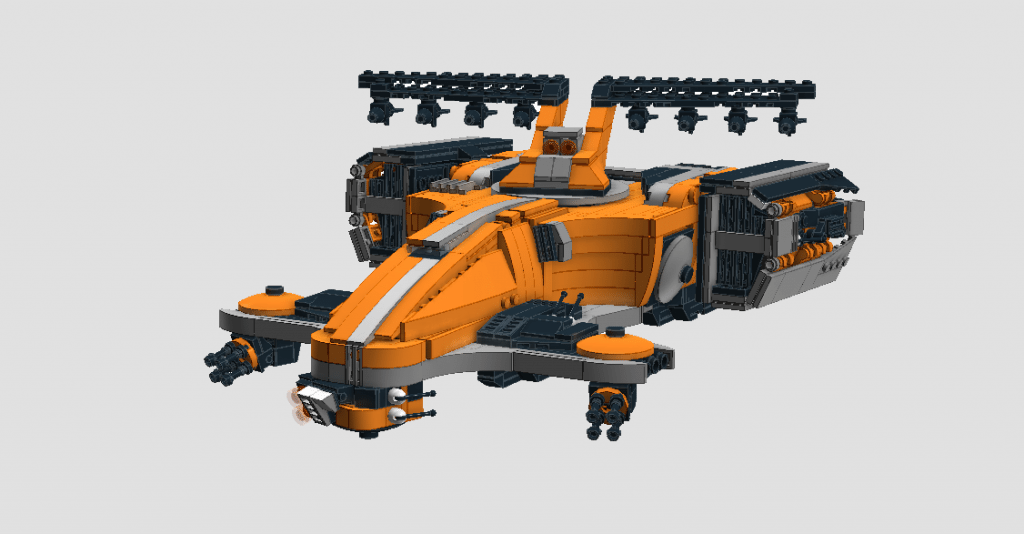 The Sky Ray isn’t a tournament-winner, but if you want defense against airplanes there’s few units better and it serves as a very solid middle-of-the-pack unit, being neither overpowered nor underpowered. Like many of the Tau units, it’s simply a solid contender with some cool uses; it doesn’t have a lot of customization options, but it can leave that to other models- Sky Rays come to do one job and do it well, so if you need to stuff some missiles down someone’s craw, look no further.

As always, remember you can get up to 25% off orders with Frontline Gaming if you’re looking to start an army or expand an existing one.

I like skyrays for lower-points games. They’re pretty durable and good multi-taskers, a rarity in Tau if you ask me.

Skyrays are actually surprisingly amazing in the current meta due to the fact that there are so many bikes relying on jink saves. (marines, eldar, orks, etc.)

all those Ork deathstars upending the meta!

Ork stompa lists are quite prevalent these days, bikes are a usual pairing in those lists.

I also like how everything that needs LoS on it is mounted way up high, so it’s easier to keep in Cover without losing firepower than, say, Imperial Tanks with Sponson/Hull Weapons. Would be nice to still have that old upgrade to move and fire as a Fast Vehicle, tho.

Yeah, no more Multitracker on vehicles makes me really sad. On the other hand, being able to fire six Seekers without needing six Markerlights more than makes up for it, in my opinion.

That is an excellent point, yes.

Regarding why would the hammerhead and skyray BS be better than other fire caste. I’m thinking there are a few potential reasons. The air caste are actually the pilots in the Tau fluff, and the other one I was thinking is that the skyray and hammer head have better optical gear than that of the devilfish and others.

I know the Tau may receive some hate, but for those who do love them, it’s not only because the models look cool and the crazy bonkers, awesome rules they get, but the Fluff is frickin amazing.

Yeah, I kind of assumed that the Tanks had more space available than the Suits for targeting gear and such, and are probably a more stable firing platform as well.

These would come in handy when Death from the Skies comes into play.