Frontline ITS 2016 Mission Break Down

You are here: Home › Infinity › Frontline ITS 2016 Mission Break Down

Infinity loves Frontline Gaming so much they decided to name a mission after them! Well… not really, but it’s still a great mission- let’s take a look at it – for more articles like this check out the Tactics Corner.

Personally this is one of my favorite missions because the rules are simple. Simple rules allow the players to focus on 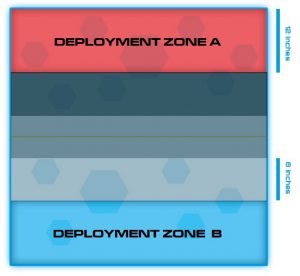 their tactics and playing the game. Using standard deployment zones, you need to march up the field and dominate (have more points) in specific zones. The further the zone is from your deployment zone, the more points its worth. But remember, the zone closest to you is worth the most for your opponent so you know they’re going to be driving forward too…

To dominate a zone you need to have more points than your opponent. This means models, markers, spawn seeds, and AI beacons all count… obviously unconscious/dead models do not, and neither do things like equipment markers, mines, and holoechos.

Baggage: Remember the baggage rule, it counts as an extra 20 points!

INTELCOM: This is another mission where INTELCOM exists, allowing you to either keep your Classified Objective or exchange it for the points listed on the card at the end of the game to use towards dominating a zone you have an active model in.

Dominate the zone closest to you – 1pt

Dominate the farthest zone from you -5pts

Told you this mission was simple! But keep one thing in mind: you get no points for finishing in the enemy deployment zone! So be mindful of where that is when they are setting up.

Also with your Classified Objective only being worth 10% of the total possible points you’re better off just skipping it and using it for the INTELCOM points. This is true pretty much 100% of the time since the closest you can come in this mission to a tie is with each player controls the zone closest (or furthest) to them and one controls the middle. IF you score your CO then that could raise your score to 3-2 or 5-1, not enough to win and not enough to turn a minor victory into a major one. Thus it’s logical to use the card for its extra points to ensure you can capture the middle and zone closest to you.

Granted, It’s possible to steamroll your way across the board, scattering your enemies before and listening to the lamentations of their women, and control all 3 zones giving you a 9-0 score and you might find yourself really wishing you had that Classified Objective to go for 10-0 – but you never know when/if that is going to happen and you decrease your chances of winning over all.

As I said, this is a favorite of mine since the rules are simple and encourages some interesting tactics. Killing isn’t nearly as important as defensive durability and speed. How do you play Frontline? As always, Frontline sells Infinity products at up to 25% off every day!

Assuming you have second, would you generally recommend the strip two orders, or limit to one command token, or neither in this mission?

I second the use of intelcom in this mission. I recently played frontline at a 400pt tournament last sunday, going against an avatar, sphynx (you read that right, two tags!), specullo killer, HD+ umbra legate and some other less nasty stuff. I pulled coup de grace, but it was worth 33pts. It probably would have been really useful too, except all my opponent had left at the end of the game was an ikadron still in his deployment zone. Avatar is a punk!

Sounds like he went WAY too hard on the big and flashy stuff. I love my YJ heavy infantry, but I had to learn to keep it at the 4-6 in a 300 list area real fast.

At 400pts he still had 10 orders. It was a strong skew list for sure, but it wreaked strong havoc earlier in the day. Luckily, I had some good AROs (dropping the umbra and the sphynx) and spent active turns cheerleader killing. The avatar going down was due to an engaging myrmidon, who gave the avatar hell until it was dead.

Wow 10 orders at 400 is pet darn low… I mean that’s a monstrous amount of fire power and some really nasty stuff… But just not a lot of orders to work with.

11 orders technically, with strategos 3, and at 400pts it’s not bad, especially in take and hold missions. those two tags are pretty hard to take down. I got a lot of lucky shots (hector killing the speculo killer and the sphynx in ARO, and the umbra dying to thamyris and eudoros in ARO) so that helped me a lot. My Steel Phalanx list only had 14 orders, but I believe that higher point levels doesn’t necessarily mean more models, just more elite ones.

So how are you liking Hector? For me he looks great on paper and either he does something amazing or he’s a complete done I find he’s a model with very little middle ground but to be fair I have a used him a whole lot.

I love Hector, and I find it hard to make lists without him now. His strategos giving me 11 orders in a pool, his 2 wounds and NWI, and that plasma rifle and x-visor really get work done. Also, since his tinbot affects fireteams, the myrmidon hacker gets a little hacking defense too. I generally find he works best in either a dactyl or a myrmidon team. The thorakitai are great, but with Hector really wanting to push up and their 4-2 move, I’m not a fan. When HSN3 comes out though and they get access to HMGs and feuerbachs… that may be something worthwhile.

So Kerr me day I don’t really like INTELCOM as a rule, but if we are going to have it we might as well use it well.

They’ve just made the CO such a trivial amount if points that there is almost no reason to go for 1 point instead if helping yourself score 5.