Jason here to talk a little about the Age of Sigmar learning league that we will be starting in the next couple of months.  The goal of the league is for the staff to dive head first into the game while slowly collecting, assembling, and painting our forces.   We have made a conscious decision to only modify the current 4 page ruleset by using wounds as our balancing factor in order to determine how many models we will purchase and paint each month. We are also capping the keywords to 1 Hero, 1 Wizard, 1 Monster, and 1 Warmachine per 25 wounds.  With the recent confirmation from GW that there will be some kind of organised play ruleset coming out this summer we will keep to a wound cap until the new rules are unveiled at which time we will move over to the new organized play system. 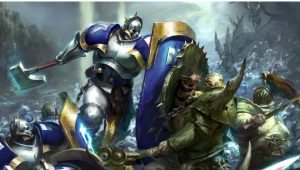 The 4 month series of articles that go along with the learning league will document the choices each staff member makes with their 25 wound cap per month as well as their progress with assembling and painting the models with an end of month best of 3 match against another staff member.  At the end of the 4 months we’ll see which staff member won the most matches and we’ll have a championship battle between the top 2 staff members which we’ll play live on our twitch stream.  Though we are still putting together our first 25 wound models here are the alliances that we have chosen so far.

I must say this is going to be a nice break from Warhammer 40k, which has become a bit….much.  Yes there are definitely things that can be over powering in Age of Sigmar and other things that just don’t make any sense but I find that by just discussing how you would like to play these things with your opponent works wonders with having an enjoyable experience.  I also find that by playing a game with defined objectives makes for a more fulfilling match since the game does tend to just become a scrum in the middle of the board (including ranged units).  I’m excited to see what Games Workshop comes up with for game balance when they unveil their organized play ruleset this summer.  The biggest complaint from the community has been the lack of point costs or any balancing mechanism other than ‘put down all your models and play’ that comes with the current ruleset and  while I understand GW’s motivation for attempting to create a game with a limited investment in game mechanics and a model focus it just doesn’t work for a tabletop war game.

We would love for the community to follow along with us as we learn the game and put your own warbands together, though you don’t have to use the same comp that we are using (wound and keyword caps).   Send us your hobby progress, battle reports, and any other Age of Sigmar updates to contact@frontlinegaming.org and we’ll post them up on our Wednesday Age of Sigmar updates.

Posted on April 28, 2016 by Jason in Age of Sigmar, Uncategorized

Can I join and play over Skype?

Join us in spirit, Shane!

My Wood Elves will fill the other chumps full of arrows! Muahaha!

It’s going to be fun to see what sort of combos and counters you add on to your armies each month. Looking forward to the articles and pictures!

Wood Elves for the win!

I like the sound of the more objective based gameplay to avoid the moshpit that can happen. Now when I play AoS I usually use the 40k tactical objective cards (psykers=wizards, vehicles=warmachines of course).

If I could make a suggestion, do not play battle line. It is simply not fun. Most of the book missions are really fun if you have a good opponent. I’ve played through many with my Bretonians and Death armies. And don’t balk at playing the big guys Nagash and Archeon. There is nothing funnier then seeing Archeon roll in on some Warmongers only to be made to eat himself. Moments like these have made AoS very fun for me. I’m excited to see official match play too don’t get me wrong. But having this hilariously epic and fun foundation really makes AoS far more engaging and entertaining then dealing with 40k Death Stars, grav spam and tau shooting over and over and over…

How are you going to balance armies like skaven that rely on numbers rather than good units?

My guess is nobody will use skaven or if they do they will only use the MC’s or warmachines.

One way I saw was to give units that require 10+ models and have a 5-6+ save the ability to take 2 for 1 wound. Since those are the horde units typically it allows them to have more models and since they only have 1 wound and the save is worse along with normally their bravery and such it sort of balances it out.

A league around here started up a few months ago. I picked up beastmen and damn they are fast. We used a modified version of the dragons lair rule set. I am definitely enjoying it though. It is certainly a nice break from 40k. I also like how all the units can be useful.