Today we have two very different lists. One is fighting for the Emperor and the other represents the greater good. Let’s see what we think about these two. 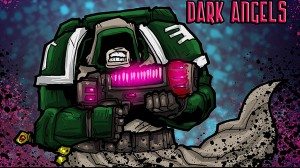 The aim is to place the company master with the command squad to tank wounds, and have the chaplain/warlord hide in one of the two vacant dev squad razorbacks. With the sacred standard, the command squad gets relentless and that is as close as Dark Angels can get to gravcents. Meanwhile the Knight Warden there to add pressure and relieve focus off of the scoring units.

I really enjoy the Lion’s Blade Battle Company. It has just as many Marines as the Space Marine version, and is also able to shoot over-watch at full BS. I played against one of these lists at a GT and lost pretty badly, haha. I also really like the Knight add-on, it will give you some more punch and protect your deep striking Marines. 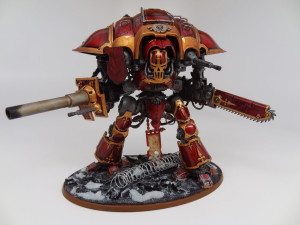 So things I would change would be switch the Heavy Flamers to Heavy Bolter’s on the Razorbacks. I would also switch the Lascannons to Missile Launchers. The Missile Launchers and Heavy Bolter’s will give you some anti infantry firepower and save you some points. With the extra points I would take a full ten man unit inside one of the pods. I would also recommend switching the Warden to a Paladin for the Sword and Battle Cannon. I really like the two Battle Cannon shots as opposed to the Gatling Cannon. However, that Gatling Cannon is very good and certainly not a bad choice!

This is a very good list and think you will do great, just watch out for kill points. Other than that, I honestly don’t have many suggestions as it is a solid list!

Alright so this list looks neat. The Riptide Wing and Piranha Firestream are amazing formations! And Farsight Enclave is my go to detachment now as well due to the cheap troops options in the form of Crisis Suits.

The changes I would make to this list would be to give the Stormsurge the Pulse Driver Cannon since he will be more likely to sit back in this list. I would get that upgrade by dropping Early Warning on the Crisis suits who will often be deep-striking in and not make as good of use of interceptor. Also keep in mind the Crisis Suits need Bonding Knives since they are Farsight Enclave. I would also drop the Command and Control Node off of the Commander and try to get Stim on the Riptides. Stimulant Injectors have saved my butt in more games than I can count. It is worth every point even if you only make one FnP save on each Riptide. You might not have the points to add Stim to all of them but if you can find it I would recommend it.

Overall I think this is a well balanced list. You have a lot of firepower with the Seeker Missiles, Storm Surge, and Riptide Wing. Plus the Piranha Formation will be great for grabbing those last turn objectives. Good luck with the list and hope it does well for you! 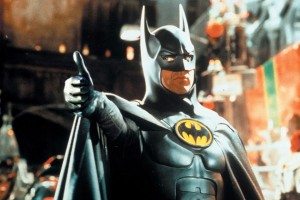 What did you guys think about these two lists? Do you think the Tau list has what it will take to win a tournament? What do you think will be the greatest weakness of the Dark Angel list? Hope you all enjoyed.

Dark Angels with no ravenwing …that’s a heresy

The Lionsblade is really good.

We all thought Greenwing was gone when the Dakkabanner was removed, but this is a pretty good rendition!

Is the double DBC as good as Gladius with Battle Company? Well, both have ObSec, so that’s a wash. Missing free transports hurts, but Drop Pods are cheap as chips when it comes down to it (3 drop pods is cheaper than any Necron transport, for instance), so it’s a downside but not a huge one. It would be one thing if he was spamming Razorbacks, but since it’s mostly Pods, it’s probably ok.

The big question is, is the boosted Overwatch equal to or greater than the Doctrines? Well, that depends on how much you’re planning on getting charged? It’s crappy if you’re facing Tau, it’s a godsend if you’re facing KDK. Meta has a lot of strong Assault units, but they’re mostly Deathstars or super durable, so does the Overwatch help as much? Who knows, that’s an answer to find out on the battlefield.

Didn’t know that, that’s great! Still miss out on a lot of SM tools (Grav Cents, CM Smashfether, etc), but it makes them relatively competitive in my book.

The improved overwatch is really good.

It’s a shame every tau list is almost identical. It’s a also a shame that for every tau list reviewed the advice is basically to turn it into Frankie’s (excellent) double stormsurge/riptide wing list or at least a varient of it. The advice is good for the most part but there’s so many other good formations like the OSC or drone net. The Pulse Blast Cannon is also an excellent option but never seems to get any love in reviews.

I want to like the Blastcannon, but it has two things that kill it for me- first of all, you can’t control what its profile is going to look like during an Intercept attack, which means the enemy can often force you to have the “wrong” profile by deploying such a unit carefully. Second, the middle profile is only AP3 and is thus mediocre for hurting Cents, Wolf Lords, etc as well as being less useful in damaging tanks. Getting twice as many shots is nice, to be sure, but I think I’d rather be able to have a reliable single statline that I can plan around.

I completely agree its far less consistently reliable but on the flip side it potentially has a greater raw power level if used strategically. I tend to be quite aggressive with my Stormsurge using it to control the mid table and assault units that need stomping. The effective 22″ range on the D profile really helps to get rid of threats such as Knights so the rest of my army can concentrate on units like cents and wolfstars.

A good centstar/wolfstar will have a Eternal Warrior/Stormshield tank at the front making the S10 profile of the driver almost useless, especially on interceptor where without a drone net any unit can just hide in cover. D missiles are good but only being a 1 shot weapon means if your first volley fails your out of D (not to mention its extreamly markerlight hungry taking 6 markerlights to launch all D missiles at BS5), the PBC is a consistent D throughout the game. The S10 profile on PBC as you said also has 2 shots and is decent for anti tank but also can still ID S5 units all be it less effectively with AP3 (as a tau player you should have plenty of other AP2 in melta, HBC, Ion, Plasma, Y’Varah flamer etc) and the final S9 profile is great for hordes. Using it just takes a lot more skill and thought in positioning the Stormsurge for the task at hand.

I totally see the merit in both guns, i just don’t think its a closed verdict that the Driver is the better option and really depends on play styles. There’s times when i wish i had the driver but there’s also times where the PBC has been invaluable.

I like your argument for the PBC. It is a great gun I just really like having the strength 10 ap 2 at all ranges.

It’s a side effect of the Hunter Contingent being nerfed into near oblivion; it basically renders anything other than a Pacific Rim list significantly less effective in most circumstances.

If the Hunter Contingent wasn’t ruled the way it was you would still see Pacific Rim Tau but now it would be twin-linked and ignore cover, tank hunter/ monster hunter.

Maybe its all he recommends because the only tau list franky plays is the double surge list and didn’t play much Tau before it came out.

I didn’t even recommend another Stormsurge this time ;P.

Its crazy how its acceptable to have SM crazy psychic powers and death stars but not the Hunter Contingent. Whats the odds of it being put to a vote again?

Who said the Space Marines powers are acceptable?

Lol very true. I’m going to a tournament this weekend where at least 6 out of the 30 lists are running double conclave….I’ll be sure to let you know how i get on facing those powers.

Damn ETC, can you guys sort out getting the ITC established in the UK. Maybe a road trip or international away tournament?!

To be fair they are planning on voting on those powers so it’s unlikely they will last. Also that war convo vs wolf star bat rep was interesting, showed the powers to be no where near as scary without tiggy in the conclave. Also I missed the hunter contingent change? What happened?

this tau list should get stomped in a tournament setting, simply not enough models in it to survive, not enough damage to hurt things that win tournaments superfriends lists and psychic lists…

How do the FSE gain access to the regular tau sig systems? is this only in CAD or in Dawnblade as well? any reference to previous thread / pg # in the codex would be appreciated

It is in the latest Farsight Enclaves supplement. The wording on Sig Systems has changed so that Riptides may no longer take them but those units still eligible may take systems from TE and/or FSE.

If you have the latest version it is right there on the page about Signature Systems.

I am going to disagree with Frankie on one thing: so long as Drop-pod grav is a thing any Tau list should either take EWO on every suit capable of having it or have a VSG.

Anything else is verging on suicidal list design against an opposing list type that is really pretty common.

CDS is an interesting choice on the Riptides and one I have used with some success. Massed BS2 overwatch when you have cheap screening units (Drones/Piranha) to give Supporting Fire to can catch assault armies out. I am not sure how this fixed BS2 snap-fire interacts with the Invisibility nerf in ITC but when playing standard rules 40K it is one of the better ways to land shooting hits on an invisi-star. Stims certainly make the Riptides stronger but the CDS has nice synergy with a list that can afford to play this layered defence game against assault.