Quadrant Control ITS 2016 Mission Break Down

You are here: Home › Infinity › Quadrant Control ITS 2016 Mission Break Down

It’s time to get aggressive, today we are talking about the 2016 ITS mission: Quadrant Control. For more articles like this check out the Tactics Corner.

It’s not often you get to say this in Infinity, but leave the specialists at home and grab all the big guns you can carry- we’ve got ground to take and hold! The idea behind this mission is simple, have more points in a quadrant than your opponent to control it. Have more quadrants than the other player and you score more points than they do. The only things that don’t count for points are unconscious models, hidden troops, and troops not on the board. 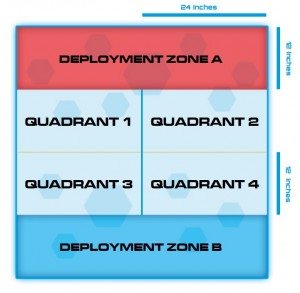 This mission will be your standard deployment with 12” deployment zones. Make sure to pay attention to where your deployment zone is and where your half of the table to have a good mental picture of where the quadrants lie since you don’t get to mark them out until the end of the game turn.

Dominate more quadrants than your opponent = 3pts per turn

This mission is pretty straight forward and so is the scoring for this mission. The one question a lot of people are going to ask is “Do I keep my Classified Objective or take the points?”

The answer to this is = take the points. Always.

There are three different scenarios that can happen during this mission, and the points will be far more useful in each of them: You get blown out, it’s a close game, you blow the other person out. Let’s talk about each of these:

If the game is close, either in a series of ties or each player dominating one turn then you need to dominate in the last round. Your Classified Objective will net you 1pt, but your card will help you net 3.

The final scenario, is that you are blowing out your opponent. This is really just the reverse of the first situation, however you have to be careful of your opponent trying to use their INTELCOM card against you, so you will need yours to try and mitigate what they are doing.

The only time you could make an argument for keeping the Classified Objective is if you were trying for a full 10 pts. Considering the huge point swings in this mission’s scoring 10 points is a risky proposition. I would much rather have a better chance of scoring 9 pts than a risky chance at 10. But I’m pragmatic like that.

In the end, Quadrant Control is a mission that awards being aggressive just short of reckless. You want to throw your army up the board early on and push your active turn to kill enemy troops. (Can’t dominate if you’re dead!) I think the jury is hung on bringing your TAGs here, they can be an amazing way to hold a single quadrant, but tie up a lot of points in one area making it tough to hold down several places. What do you guys think? Have another view on INTELCOM cards? Comment below! And as always, Frontline sells Infinity products at up to 25% off every day.

5 Responses to “Quadrant Control ITS 2016 Mission Break Down”