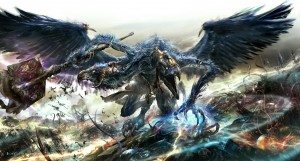 DeeJay here with another Daemons Tactics Corner article for you.  This one will describe how to use Fateweaver and the new Daemonic Incursion detachment to use the warp storm table to your advantage.

The Warp Storm has been viewed by most players are the worst aspect of playing the Chaos Daemon army.   I’ve seen multiple players run two CADs just so they could make Chaos Space Marines or Renegades as their primary just to avoid rolling on it.

It’s natural to feel this way.   While the majority of the warp storm results are good for the daemon player, we all remember the one game where our entire army fell apart when snake eyes were rolled.

With the new Daemonic Incursion detachment and Fateweaver’s modification ability, what was once a ‘probably good, maybe bad’ game event can be changed into ‘Wow that’s completely broken’ 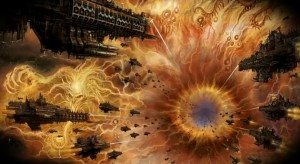 How The Warp Storm Works

You roll 2D6 at the start of the shooting phase and compare to the table if your primary detachment is Chaos Daemons.

Remember that the 2d6 probably distribution result in more results from the center of the table than on the edges.    Just like any good Settlers of Catan player can tell you, the majority of results will be between five and nine.

This means that when using a normal Chaos Daemons CAD, you will usually get some free ‘shots’ at your enemy causing damage to units — possibly wiping out units or causing them to flee the table, with 6 and 8 having the best ‘damage’ results given they do not ever scatter off target.

Another way to look at this distribution is to use the table to 2d6 probabilities expressed as a percentage. 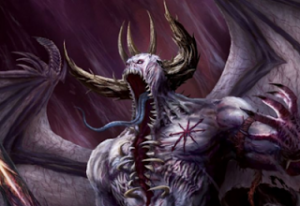 Another way to look at it is like this.    These are the combined dice numbers from the table “2d6 All Combinations”. 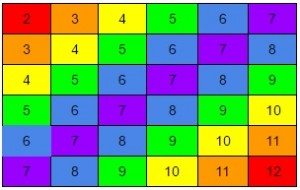 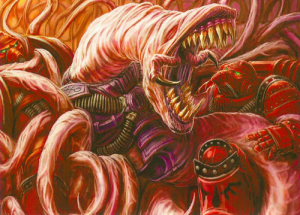 The damage results, while nice to have, are not the areas that are of major interest.    The Daemonic Incursion special rule “Unearthly Power” lets the daemon player add or subtract one to the ‘Warp Storm’ results.    The only works when you are rolling on the table.   If you are playing against a Daemon CAD, you cannot screw with their results. 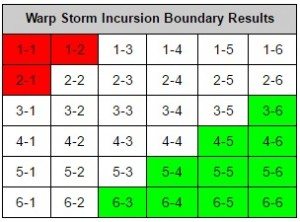 This warlord trait, which Karios has standard, allows the daemon player to reroll any result on the table.     In normal Daemon CAD lists, this is used to lower the chance of a low boundary result from 16.66% to 2.77%    However, when combined with the “Unearthly Power” special rule, this chances the chances from 8.33% to 0.74% of a negative result.     However, there are better ways to combine the Lord of Reality with the Unearthly Power. 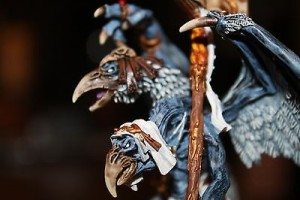 This artifact that Karios wields allows the player to re-roll a single D6 of your choice once per turn.  If more than 1d6 is rolled, a single die can be picked up an rerolled.

This means that if you rolled a 6 and 2 for your ‘warp storm’ table, you could use the Staff of Tomorrow to pick up that 2 and reroll it.   Since you have a high boundary result on a 9 or greater, there is a ⅔ chance of that average roll transitioning over to a boundary result.

If either both dice have a 3 or less, there is no need to use the Staff of Tomorrow, but instead you should use the Lord of Unreality ability.     Visually, the result will look like the following.   If the dice rolls match the red results, reroll the result using the Lord of Unreality.   If the dice match the yellow results, then use the Staff of Tomorrow to pick up the lower value dice and roll it.

In the red or green cases below, you can save your Staff of Tomorrow reroll for somewhere else in the game turn.  This means that 50% of the time, you will be using your reroll on the table. 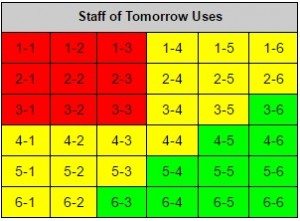 So, what exactly are the odds? 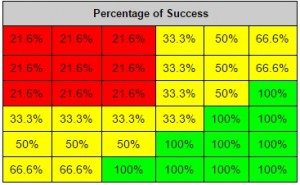 Using this method, there is a 55.4% chance of getting a 10 or more on the warp storm table each turn!

You can test it out on your own.   Open up a google spreadsheet and record the tests in two columns, success and failure.   Try the method 100 times, and you should about a 50% success rate.

Even if you had to use Fateweaver’s reroll to ensure a grimoire success, or to prevent a catastrophic perils roll — you still get a 47.7% chance to get a boundary result.      Using half his rolls during the shooting phase to jump your chanes up to 55.4% of a good boundary result is just frosting on the cake.  (Frosting goes on cake, icing goes on cookies) 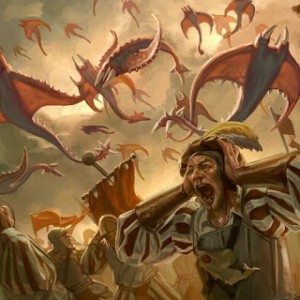 What Does This Do For Me?

There are three valuable perks you want to gain from the warp storm table.

The first perk, rolled on a 10, grants all daemons on the board +1 to their invulnerable save.    If you remember our discussion on resilience, going from a 5+ to a 4+ increases a unit’s  “Time to Live” by 50%.

This power combos very well with ‘cursed earth’, the grimoire, and tzeentch.    I have played multiple games now with my soul grinders enjoying a 3++ save.  Since I had them as Tzeentch grinders, they were rerolling 1’s for a 77.78% of making a save.    This makes them extremely hard to hurt, providing a lot of board control.

This can also combine with a chaos knight for similar results.   Unless your opponent is using D, the knight can shrug off the majority of incoming damage.    Just grimoire the tzeentch knight for a 3++, then when you get the 10 result on the table, your knight has a 2++ rerollable save.     Who cares if 10 warp spiders deep strike right behind it?

Most of the time when I am rolling on the warp storm table, this is the result I am looking for.    This is because it gives a large area buff to my entire army that I can guarantee will take effect.    Possession is nice, but it might just not work.   Summoning is nice, but they might scatter off target.   A +1 invlun save across the board is rock solid.

You can also invert this and go with a -1 to the save.   If you are playing against another daemon army, going for a 4 on the dice instead of a 10 is the better solution.   This is because your opponent will be rolling on the warp storm table as well.   If you buff your army to +1 save, you will actually be helping your opponent too — likely moreso than yourself as any shooting you have will hit their improved saves.   On their turn, they will roll again on the warp storm table, so if you instead lower the saves on your turn they will go back to normal on their turn.   This lets you weaken them on your turn and then go back to normal on their turn.    There are obvious exceptions to this — such as if you are worried about losing models in assault on your turn and need that extra durability.   In many cases though, this a neat trick to pull on your daemon opponent.

An 11 on the table can be situational, but when that situation happens it’s extremely useful.    Since you can always shift off the result of an 11, you are never stuck with it.

The chances of this occurring to a LD 10 character are 50%.   If you have the doomsday bell in your army and the enemy LD is lowered to a 9, this chance increases to a 62.5%.

If your opponent has a large number of psykers, such as 8 warlocks and 3 farseers, I would probably take “Warp Surge” as my result instead.   However, if my opponent has only one psyker or has multiple, expensive psykers — then this result can be very useful.

Summoned From the Warp

Gaining 2d6+3 basic daemons of your choice is never a bad thing.   They can be used to generate extra psychic dice as horrors, to objective camp as nurgle, or just harass small units as ‘letters or daemonettes. 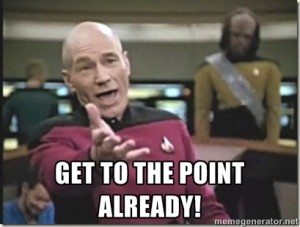 Give It To Me Straight!

If you are using fateweaver, and you have taken the daemonic incursion, follow these rules to maximize your results from the warp storm table.

– If you rolled a 9 or more … you already got what you wanted!

This will use half of Fateweaver’s rerolls, but it mean’s in over half of your game turns, you will be getting a 10-12 on the warp storm table.

Thanks for reading the article here at Frontline.   Not only does Frontline provide great hobby support, they offer great prices since Frontline Gaming sells Games Workshop product at up to 25% off, every day.

Here in the UK icing goes on cake, there is no frosting, and nothing goes on cookies as cookies are just chocolate chip biscuits, though you might put icing on biscuits (what you call cookies, your biscuits are our scones).

… oh and the daemon article was good 😛

Great article on the probability. It’s true that daemonic incursion is just so good at avoiding disaster or getting you a great role on the warp storm table. I definitely want to try it out myself. Thinking of giving it a go with the Khorne knight and a bloodthirster or 2. Grab the relic, roll +1 invuln, profit with 3++ Khorne army

I’ve been playing it for a number of games now, and the numbers are taking place in real games. In about half of the turns (2-3 in a five turn game) you get a +1 save.

Going Khorne is definately a good way to go. 3++ is hard to cut through.

And if fateweaver rolls cursed earth on either head, that’s a 2++ save. Facing a knight, 2 thirsters, and fateweaver all rocking a 2++ would be bad for anyone.

I feel like as far as bombing my opponent goes I have the most luck getting VP with the Slaanesh one. I have gotten lucky and even finished off imperial knights with that one. The other gods tend to whiff for me.

Of course if they have a psyker I shoot for 11 everytime. As mono Nurgle I usually am claiming a 2+ cover save so don’t care as much about improving my invulns (unless everyone is in combat), so I am usually trying to outscore my opponent and eek out more damage. Free help popping transports is always good in my book.

The 11 makes for a better roll if you have the bell.

Definitely. I think the bell is potentially the best relic. As long as the bearer is alive you might actually succeed with fear. Most of the players in my area are xenos and not fearless, so this is actually coming into play as pretty useful, especially along with the Tallybands built in enfeeble. Leadership tests all day.

While Nurgle isn’t the killiest daemons some of these shenanigans are winning me games against Eldar right now.

The colored charts of probability are some of the best examples I’ve ever seen. Kudos on the great article!