The Armory ITS 2016 Mission Break Down

You are here: Home › Infinity › The Armory ITS 2016 Mission Break Down

The Armory is something of a darling among Infinity players and it’s easy to see why- basically its king of the hill with guns! For more articles like this, check the Tactics Corner. 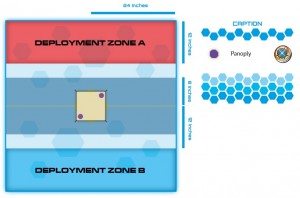 Did your parents ever tell you not to play with guns? Well, I’m not your daddy and I say the bigger the gun, the more fun it is- Let’s get some! This mission uses your standard 12” deployment zones with an 8 inch square building of infinite height in the center; inside are two panoplies. (aka world’s coolest vending machines) There is also an 8 inch exclusion zone in the middle of the board, so infiltrators will find the usefulness somewhat limited.

You want to try to dominate the center room by having more points in it than the other player and by getting guns from the vending machines. You are also going to need a specialist to open the door to the room – so better bring a couple along. 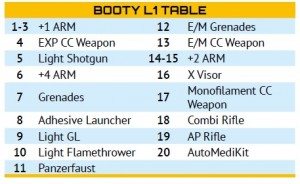 To get a toy from the machine you only need to be in base contact with it and pass a WIP roll. Then you

can roll on the Booty L1 chart and gain the additional weapon/piece of equipment. Any type of trooper can pick do this, but specialists get to roll twice and pick the one they want, and those with the trait Scavenger don’t need to make the WIP roll. After turn 1 the vending machines can be targeted and destroyed if so desired.

Dominate the central room at the end of the game = 4pts

It should be worth noting that it doesn’t matter if you get 1 or a dozen-as long as you get more equipment than your opponent you score points. Also you don’t have to technically kill anyone in this mission, so if you and your opponent chose you can just stuff as many models as will fit in the room, empty the machines and call it a NRA house party. It’s an interesting idea to test to see who has the more efficient list and better rolling.

The Armory at its heart is a straight forward mission. But with the uniqueness of the equipment vending machines, it has the potential for some exciting situations. Its counter intuitive and perhaps slightly underhanded feeling but going first and scoring points from grabbing more equipment is a tactic that will surprise and upset many. This mission has been out for a while so I know there are some interesting tips and tactics, and stories. Share them below! As always, Frontline Gaming sells Infinity at up to 25% everyday!

WOO! The Infinity articles are back!

Always good to see some Infinity articles. However, a points need to clarified. First, yes units with large silhouettes (S3 & up) can fit in a narrow gate IF they go prone. However, remotes and TAGs can’t go prone.

Second, if you have a specialist use the skill to open a door than all the doors open. However, a Hacker that uses the LOCKPICKER Hacking Program will only open that one door and not all of them. Also, you forgot to mention that you can blow up the wall (With Anti-Material weapons) and make your own door

Actually in the FAQ it says that when moving when doing an engage you move large troops through narrow gates.

You are right about lock picker, buy I did mention blowing a hole in the building in the last bullet… It’s Mr favorite way in!