Hey guys, it’s Adam from TheDiceAbide.com. While I was away at Adepticon, I had the opportunity to meet two nice gents, Mat and Rich, who have developed a game some of you may have heard of called Guild Ball. I saw it go through it’s Kickstarter, without causing a massive stir, generating a little under 1000 backers, and decided I would hold off to see if it picks up momentum.

This model alone sold me on the game

Well, after 2 years, the guys at Steamforged Games have successfully had a 128-player tournament in the UK, and just had a 64-player tournament at Adepticon. That may not sound huge compared to the 350+ players for the 40k Championships at the Las Vegas Open, but for a 2 year old company, that’s actually quite impressive. 64 players is about double the turn out for the Infinity ITS GT at Adepticon, and as far as I could tell, the biggest event outside of 40k and X-wing! After meeting the game designers and having a good long chat with them, I noticed a trend around the gaming halls, everyone had a Guild Ball team in their bag, and many were excited to talk about the game.

What’s the deal with Guild Ball? 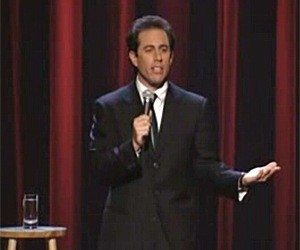 Putting our thinking caps on, Pete, Obi and I had a few beers and decided to have a good brain storming session to try and figure out the sudden success of the game. Obi and I had done a demo game, and it basically played a lot like Warmachine, though with fewer models and the objective of kicking soccer-like goals, instead of assassinating enemy Warcasters. That’s not to say there isn’t plenty of violence, you actually score points both by kicking these goals and taking out enemy players. In our beer-tainted haze, we kind of came up with a few different reasons why we thought the game was taking off so quickly.

After mulling it over a bit, I finally decided to bite, my curiosity got the best of me and before long I was walking away from the Steamforged Games booth with arms full of Brewers. I had purchased the entire team (actually I missed Spigot, who I ordered yesterday), plus a handful of The Union (the mercenaries of the game). The first models out of the packaging when I got home, I quickly got to assembling my new collection of pewter dolls.

The models themselves are pretty finely detailed, about the casting quality of the GW pewter miniatures, a bit of flash, but nothing awful, though it did make me remember how spoiled I am with Corvus Belli’s pewter casting process. That said, the models just needed some minor work to make perfect and they were ready to go! I chose to pin my pieces, out of habit, and found that the pewter was easier to drill into, which I quite liked. Not long after getting started, I got carried away and assembled the whole bunch. 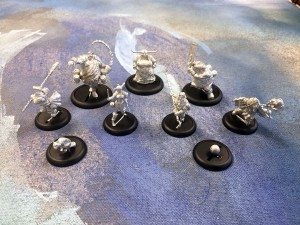 It didn’t take me long to find a group of about 30 people in the Portland Oregon area who enjoy the game, and a few of them even play at my local game store. With miniatures in hand, I went down to my local shop to play my first game of Guild Ball. He also had brewers, and we played an Introductory Game, where we both used the contents of the starter pack. I was a bit skeptical at first, thinking that both of us bringing the exact same 3 models would lead to a boring game, but I was quickly proven wrong. 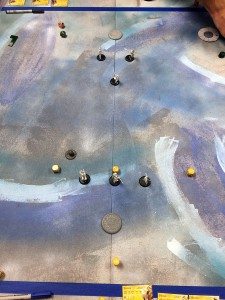 After a quick recap of the rules, we were off. I received the ball, and quickly noticed that I just might be able to score a turn 1 goal with Friday, the Brewers striker. Getting hot in my heels, I moved up the board aggressively, only to have Friday knocked on her ass by a boat oar swung by my opponent’s Hooper. He scooped up the ball with his own Friday and quickly scored a goal against me. This isn’t going to be as easy as I thought… After his goal against me, I threw the ball back into play, right next to my own striker, who grabbed the ball and returned the favor, scoring a goal in return. The game was now tied, one more goal and either of us can win the game.

He threw the ball back in to an unoccupied area of the table. That turned out to be his undoing though, he rolled for scatter and it bounced right next to my weakest striker, Hooper. Hooper quickly nabbed the ball and ran within scoring range, next to my opponent’s downed Tapper. While I was within range, I didn’t have the momentum needed (one of the two resources in the game). Fortunately though, I had the Influence (the WMH Focus-like resource) to buy an attack on Tapper, giving him a bit of the boot while he was on the ground. I now had the momentum to kick the ball with my mere 2 Kicking dice, one came up a 5 the other a 1, the ball sailed into the goal and the crowd went wild! I had won my first Guild Ball game. 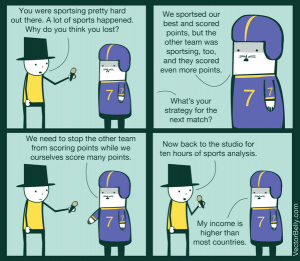 After my first game, I can now really see the draw, it’s very fast paced and exciting, and while it has combo’s like Warmachine, they’re easier to figure out and execute, and not nearly as important to win the game. Like Infinity, I think you could reasonably play fine with whatever models you think look best, it’s just a matter of figuring out their strengths and playing to them. I’m pretty excited to get some paint on these models, they just look lovely when done well, and I could even see playing in a tournament or two. Overall, I give the game an enthusiastic thumbs up, otherwise you probably wouldn’t see me writing about it! 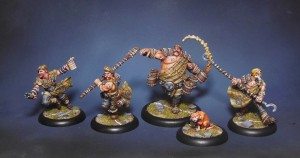 How could I resist this?!

Next up on the block is event coverage for the Infinity tournaments at Adepticon which I participated in, stay tuned!

Posted on April 15, 2016 by Adam in Battle Report, Editorial, Review

I’ve heard really good things about the game, and it is growing in popularity extremely quickly.

Yeah I’ve got some friends who love this game. Played a couple of demo games and it is fast and fun. The combos are straight forward but the game gets very deep very quick.

Would love it if we could order the models from Frontline!

These fellas are coming to LVO! We’ll talk to them about stocking the product.

Is that confirmed they are coming to LVO?!? That’s great news!

I listened to a pod cast with them, and thier goal is to
expand past the size of infinity… In the UK that has arguably happened already in terms of tournament involvement.

As much as I love Infinity, it would please me to no end to see them make a huge splash in the US.