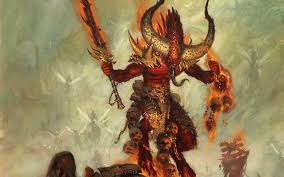 Blood for the Blood God! Skulls for the something, something (I’m too pumped up to care about how the chant ends, it’s FAR TOO AWESOME!!)!!

You all know the feeling, when you’re out for blood and you end up stumbling home with the skull of a small animal as a trophy?… No?… Just me, then? Nevermind… (maybe I should seek help…) Anyways, there is little in the grim dark future that marvels collecting the skulls of your enemies… and this guy is so good at it.. he sewed himself a cape!… Damn, that’s manly… Today, we are going to talk about the manliest cape tailor in all of the warp… the blood thirsty Skulltaker! For more awesome articles by less unhinged authors than I, don’t pass up Tactics Corner!

Khorne is my Co-Pilot

Alright, ladies and gents. If you’ve read past my little break down up top where I reveal some incriminating evidence about myself and a night I barely remember, don’t worry… there will be plenty more of that… as it says above… Khorne is my Co-Pilot. Today’s subject is Khorne’s very trusted and worthy executioner, the Skulltaker (Yeah, that’s the best job title ever). There is definitely something to be said about perusing your dream and doing what you love, much like Reece and Franky with Frontline gaming… just more gruesome decapitations and less gaming paraphernalia. As I do with all of my articles, I think it’s best to break down all of the Skulltakers special rules and wargear, talk about their overall effectiveness and then give some insight on how you use this crazy son-of-a-bitch. Let’s rock and roll.

The more and more I sit and read about Khorne and write about the units in this codex… the more awesome it all is, the KDK codex is like one big death metal concert: guitar solos, gruesome displays of violence, everybody has an axe (oh snap!), the truth of the matter is… Khorne is putting a band together and the Skulltaker is rocking lead guitar. Let’s see how awesome it really is! 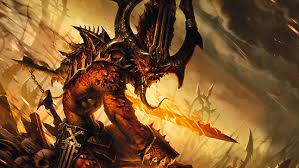 I’m going to break down each of his rules into two categories, so we can see exactly what about the Skulltaker is “Good”, and what could be labelled as “Just Okay”.

The Skulltaker’s wargear is no joke; both his armor and his weapon equips him for some serious business, along with him having the offensive stats of a greater daemon (WS, BS, and Initiative 9), he is ready to deliver a serious, face melting, slaughter solo. The draw back to his load out of weapons is the lacking of a ranged weapon. I know that KDK rarely has any ranged weapons, but that is easily supplemented by speed, the Skulltaker cannot be put on a bike or ride a Juggernaut, his pitiful 6″ movement is what you’re left to work with, not the greatest.

Now that we’ve laid everything out, it’s pretty clear that the Skulltaker has a lot to offer. Plus… he has a cape MADE OF SKULLS! That’s probably the most awesome thing that I have ever seen! Seriously… there is that…

and this… (Lumberjack Assaulting the North Pole) 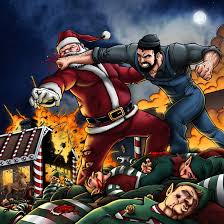 Both are valid options for the most awesome thing ever… Anyway’s, back to it. How are we supposed to get him on the table? He isn’t the fastest unit in the codex and will struggle to keep up with Jugger-lords and Khorne dogs, so how can we make him live up to being as awesome as a Lumberjack punching Santa in the face? Let’s find out!

There are a few ways to run the Skulltaker and have him be a successful. For the sake of time, I am going to discuss two in this article, but feel free to post up some of your strategies below in the comments section! The first strategy I’m going to talk about is the more straight forward approach, I’m going to call it the “Hack n’ Slash” strategy. The second approach I’m going to touch on is a little different and less aggressive but can really catch an opponent off guard when it happens. I am going to call the second strategy the “Stand n’ Shoot” strategy.

As I’ve mentioned a few times through the article, the biggest draw back for the Skulltaker is his transportation issues. Deep Strike can be unreliable at times and it prevents him from assaulting for at least two turns of the game. He is unable to take a bike or a Juggernaut which makes him difficult to choose over a Chaos Lord with tons of different options (most of which are awesome). His price is fine, only 100pts for a pretty bitchin’ close combat unit, but when you start to compare him in the HQ slot to a Chaos Lord or a Bloodthirster… he just doesn’t stack up. Ultimately, there are better options.

Shred Me a Face Melting Solo

I would love to see this awesome model make a real appearance on the top tables of 40k tournaments… and the only way he is going to get there is if we all try our very best to pioneer new ways to use him. As I do with all of my articles, I challenge you all to find a new way to use the Skulltaker that makes him the all-star in your army. Share your discoveries below, let’s give this rock star an awesome encore and bask in how gnarly and hard core he is. Can we make it happen? or am I just unhinged? If you want to be unhinged like me and give it a shot, Frontline Gaming offers up to 20% off on Games Workshop product!

He really needs the option for a Juggernaut that he has in the CD Dex. Not just for the mobility, but also because the extra Wound is a really big deal, especially as one of the few Models around these days with Eternal Warrior.

It def sucks that a plain herald can take a juggernaut and pay for a lesser reward to get the ap 2 decapitating axe. Skull taker in a deep striking blob of blood letters would be good, but they should have at least given him rending since he is supposed to be Khornes favored daemon. In all honesty, a herald jug with fury and another with wrath and Crimson crown as warlord in a blob squad would be much stronger (and way more than double the point cost)

Being AP3 and stuck at 6″ movement are both huge downers for Skulltaker, yeah. He pays an awful lot for having such a shitty warlord trait and middling statline. He’s great in a fight against chump-tier characters, but if someone rolls up with Chapter Smasher or anything on a Thunderwolf or a Wraithknight or any other “real” melee unit, he will go down in short order.

Even if he just had rending so his decapitating blows can get through 2+ armour he would be better. Still not able to stand up to chapter masters because shield eternal/gorgon’s chain, but better.

It would also be nice if Khorne’s lesser locus wasn’t absolute arse.

MILK FOR THE KHORNE FLAKES!