Biotechvore ITS 2016 Mission Break Down

You are here: Home › Infinity › Biotechvore ITS 2016 Mission Break Down

Biotechvore is a mission that can either work for or against you, but you need to study it and prepare for it- for more articles like this visit the Tactics Corner.

People love or hate this mission, and to me it all comes down to preparation. This is a mission you need to prepare 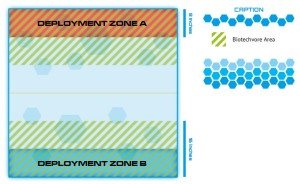 for-probably dedicate a list to. Typical ITS missions encourage you to bring a large number of models/order but in this one it is a detriment- Biotechvore throws the ITS meta on its head. In this mission you will only have an 8” deployment zone. This is problematic since the Biotechvore is 16” deep. This zone activates at the end of each player turn causing a damage 14 hit to anything inside the zone and must be saved using BTS. Retreat is not in effect. There is a special deployment rule:

Confused Deployment forces anyone trying to deploy outside of the normal 8” deployment zone must make a Phys -3 check in place of any other check they would normally make. If they fail it isn’t horrible since they can still deploy anywhere inside the deployment zone.

Similar to decapitation, Biotechvore has three levels of play that correspond to the number of points being played: Low=200 points, Mid=300 points, and Top=400 points. If you are able to keep a certain number of points alive by the end of the game you will receive:

While it may at first appear that this game is meant to be played as a more defensive version of Annihilation, things are actually fairly evenly weighted. Classified Objectives are worth a decent amount of points however since you only have one to accomplish, expect to consistently tie so gaining the extra point will not occur often. This leaves killing and defending.

Notice that the non-linear points awarding that made getting a full 4 points in Annihilation difficult will make getting the full 4 in Biotechvore equally difficult. However it does help the player in that it will take a significant amount of losses before crossing the threshold from 3 down to one 1 pt. This should serve as encouragement to engage with the enemy and try to gain an extra 3 pts.

Biotechovre can be an incredibly easy mission IF you prepare for it. By taking a large number of linkable troops you can get the bulk of your army out of the Biotechvore zone and into position midfield. This puts the pressure on your opponent to “run into your guns” or let the mission destroy them. Bring smoke grenades, fast troops, link teams, and this mission will be no problem for you. But if you try to play the “normal” way with cheerleaders, order spam, snipers and things buried within your deployment zone, the mission, not your opponent will punish you.

Have you had experience with Biotechvore? Love it? Hate it? Comment below- and as always, Frontline Games sell Infinity products up to 25% off every day!