Aoooo! Time for some more Space Wolf action, this time: The Drakeslayers! Check the Tactics Corner for more great articles.

Krom Dragongaze’s great pack, the Drakeslayers, excel in hunting down monsters and bests in search of glory on the battlefield and in the eyes of their Wolf Lord! 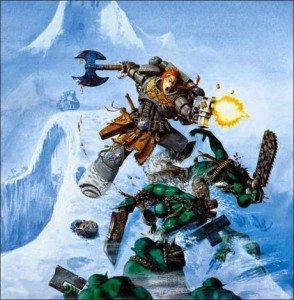 The Drakeslayers haven’t gotten the fanfare of the Ironwolves or Blackmanes, but they have some awesome special rules that are certainly worth taking note of and depending on your meta, may be the best choice of all the Space Wolf core choices. 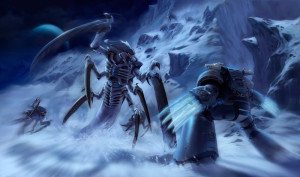 I really like this Formation. While it isn’t as glamorous as some of the other options in the Curse of the Wulfen supplement, it is rock solid. The re-roll is one of the most powerful game mechanics in a system that uses D6s, and a Formation that gives them to you in spades dramatically increases the efficiency of your army for little to know additional input. Monster Hunter is incredible, and on units like Long Fangs and Land Speeders, it really pays dividends. Now, your meta may differ and if yours doesn’t swarm with MCs and GMCs (although in most tournament metas, this is the case) it won’t be so useful. However, at your average tournament you will find yourself in a target rich environment!

Your melee units will also love it, and even high toughness targets like Wraithknights who often can be a pain to actually hurt, will be dramatically more vulnerable to your attacks as the magic of mathematics means you consistently do more damage due to re-rolls.

Stubborn is also not to be underestimated. Holding fast in a combat where a few dice didn’t go your way can win you the game. If you opt to go with a Wolf Guard Battle Leader on a T-Wolf for example, and run him in a unit of Fenresian Wolves (as I do all the time), losing little wolves in melee no longer means you will be running for the hills. That’s a noteworthy benefit. 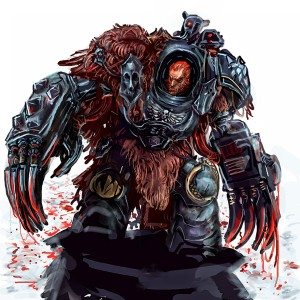 More re-rolls abound with the Glory Seeker rule, granting Preferred Enemy vs. Characters for you Characters which again, makes your units much more efficient in melee. Taking this in combination with a piece of wargear such as the Armor of Russ which hits the enemy with an Initiative penalty in a challenge, really gives you the edge and allows your Space Wolves to cut down their enemies!

The re-rolls to charges also granted by this rule is fantastic. You always declare the most probably charge first, and as soon as one of your units makes it, everyone else can re-roll a failed charge. Wow! Again, your units become much more dependable at doing what you want them to be doing. It also means your largely foot slogging army can reliably make it into combat from greater distances, offsetting their slow speed a bit.

Lastly, with Krom, everyone gets Furious Charge which is awesome. Krom himself is quite good, only being slow and vulnerable to instant death as his major drawbacks. However, detachment wide Furious Charge is not bad. I would be tempted to run the Wolf Guard Battle Leader on a Thunder Wolf though, as for one, he’s a bad ass, but for two with all the formation bonuses granted him, he becomes hyper efficient. He’d be great to run with the Wolfkin auxiliary formation to form the Wolf Claw Strike Force.

I’d run this formation in Drop Pods, with Blood Claws, Wolf Guard with Combi-weapons, Grey Hunters or Land Speeders and 2 units of Long Fangs packing max Las Cannons (not in Pods). I think you could run either Krom or the Battle Leader on a T-Wolf and be good to go as they both have strengths. Lastly, squeeze in the Wulfen Murder Pack along with some Drop Pods from an allied detachment and you’ve got a potent army that packs in a good mix of Counter-charging loonies that are in your opponent’s face turn 1 (possibly charging them turn 1) that also has mobility and fire power, all of which is very efficient due to the plentiful rerolls. I dig it and think it makes for a fun, characterful army.

How do you all like the Drakeslayers? And remember, Frontline Gaming sells Games Workshop product at up to 25% off retail, every day!

In other news, BAO 2016 tickets are up for sale and moving quickly!  We’re nearly 50% sold out after just a day, so don’t wait to grab yours.