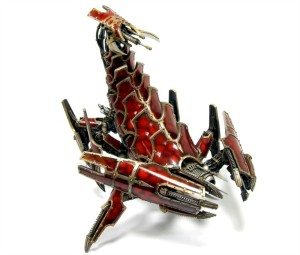 Welcome back to another fun filled Khrone Korner review by the ever lovable Goatboy.  Today I want to talk about one of those formations that you know won’t work that well – but dangit it sure seems like it would be a lot of fun.  The Hellforged Hunting Pack is a special formation from the Blood Oath Limited edition campaign book that came out at one of the Forge World Events.  As usual you can read up on more tactics in Frontline Gaming’s Tactics Corner.

The Hellforged Hunting Pack is for that guy who loves to play all his chaotic war machines and does not want to play any of those pesky Cultists, Chaos Space Marines, or nutty Daemons.  It is made up of the big daddy Kane himself – the Brass Scorpion, plus 8 other Warmachines of Chaos hellbent for blood, skulls, and most likely human skin leather.  Surprisingly enough you can make an 1850 list with this menagerie of brass and blood red so it isn’t something to completely discount.  Plus it is a Khorne Daemonkin Army so it does generate Blood Tithe which can be a bonus when trying to actually hold an objective or two. 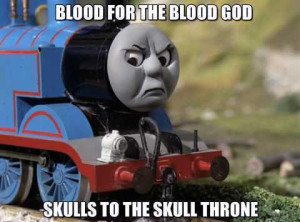 The basics of this formation is again the Leader – Greater Brass Scorpion with 8 mechanical jerks that run around him.  The Brass Scorpion is the de-facto leader of this band of merry blood machines.  The other options for friends of the Scorpion are Heldrakes, Defilers, Forgefiend, Maulerfiend, Soul Grinder, Bloodslaughter of Khrone, and Chaos Decimator Engine.  All of these models will be Marked with Khorne and the ones listed in the KDK book are also considered part of the faction and thus gain the rule – Blood for the Blood God.    This is a pretty simple list which while most likely not tearing apart the upper tables of an event – will at least ensure you have a good time and get plenty of time left over to hang out, chat, and not worry about taking a long lunch.

Will go over each individual unit available in this formation to give a better idea on how to create this hunting party.

The Soul Grinder can give you some Anti Air as a cheap upgrades for an Armor 13 monster.  I still prefer Maulerfiends as they can Kool Aid man through walls.  As you are really stretched for points – most upgrades are ignored as you try to fit in enough vehicles to make it work at 1850.

Impaler of Khrone – 12″ S 8 Ap 3 Heavy 1 – hits on a 4+, if it hits and causes a penetrating hit on a vehicle or a wound to an MC and doesn’t kill it – move the enemy 2d6 inches towards the Blood Slaughter, if it touches the Slaughter then it counts as charging that model.

Chaos Decimator aka the Weird Meh Contemptor of Chaos? 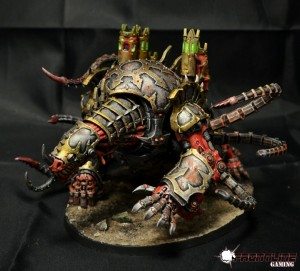 Beyond getting Daemon of Khorne and Rage for the entire formation – they also get some nifty rules to help them be more brutal in combat.  If the Scorpion makes it into combat the rest of he formation can reroll their failed charge distances.  They also all get a +1 attack for each vehicle destroyed from this formation.  This can get pretty gnarly when getting a +3 attack to a few Maulerfiends.

Other rules of Note from the other options in this formation.  The Maulerfiend moves 12″ and ignores all terrain.  This lets you bust through walls, get off some crazy charges, and pull some goofy moves as he moves in, gets there, and tries to get the job done.

The Blood Slaughter of Khorne always has to move towards an enemy unit – so they can be easily kited as they do not move as fast as some of the other models.  Blocking Line of Sight and other options can keep them in check as well as utilizing their ability to deep strike.  It is a cheap armor 13 option but most likely the Soul Grinder will end up working better for you.  It is pretty neat to teleport in, impale a drop pod/rhino and just go to town on it. 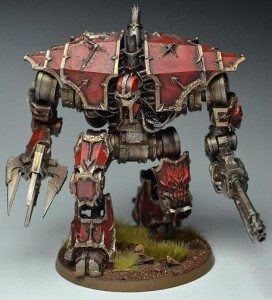 Remember that the KDK vehicles generate Blood Tithe as they will help you summon some dogs etc to help run over and fully hold an objective.  The Scorpion is a Super Heavy vehicle with a ton of extra rules.  It charges 3d6 inches – so first turn crazy charges can happen.  It does have IWND, Front Armor 14 and does d3+2 stomp attacks.  Its guns are not terrible and if it is left to run around will win games for you.  Plus it really explodes big when it finally kicks the bucket so you can throw it in and go nuclear.  Any mind magic that targets it does perils on a double as the Scorpion does not like any of that stinking spell nonsense.  Plus it starts with a 5+ invulnerable save making it a pain in the butt to fully remove.  The Legacy of Run – the first War of Armageddon gives all Khorne Daemons within 6″ of vehicle a +1 to their invulnerable save and can be given to a Super Heavy vehicle so it might not be a terrible option if you have points left over.

Tactics wise this formation just pushes forward, gets involved in your business, and tries to show you the one true Chaos God – Khorne.  They are probably bringing some pamphlets, maybe a really terrible casserole, and most likely never shutting up about skulls, blood, and more blood.  This is a list for the player that has too many Chaos vehicles and a love for simple armies that cater to the player that doesn’t want to think to hard and hopefully roll a ton of attack dice. 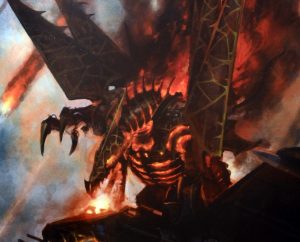 This list just pushes forward and tries to get the job done with the sheer grind of Brass, Red Armor, and hopefully some lucky assault rolls.  Again there is no grace to this list as while it would like to kill everything you have, it losing all its buddies is probably just as much fun for it as it is for your opponent.  Explosions, broken bones, and the sheer grind of a Khorne win is key to playing this army.  I would deep strike the grinders as a way to cause problems later on – as they do not move nearly as fast.  The Maulerfiends can provide a ring of pain around the Scorpion as it skitters up and prepares to launch itself into the enemy.

I wish they could let you take a Chaos Knight instead of Scorpion or maybe the other Khrone Kytan Destroyer.  It is cheaper and you can create a ton of walkers going around and strutting their way into your heart.  The biggest draw is that you can fit this army into an 1850 list and it feels very “40k and Grim Dark”.  Plus the ability for almost the entire army to generate some form of Blood Tithe is a great boon as you try to set up crazy charges. 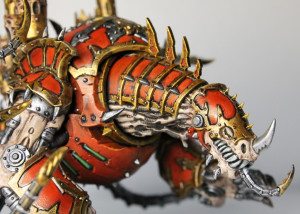 Grav is probably the worst match up as this entire list needs to get into combat.  Its one of the biggest frustrations with the current vehicle damage chart and I wish GW would just do away with it and make every vehicle like a Super Heavy.  Just carrying if you roll the exploding Hull Points result.  I think you could do a massed Blood Slaughter list that utilized its ability to deep strike.  If you wanted to go away from Hell Drakes a bunch of torrent flamer Grinders could be fun to deep strike in and cause problems.

You can fit 4 with 4 Maulerfiends to create the ultimate drop in and burn list.  That is probably more effective then the other one but I am just thinking about what I own etc.  Of course turning around and looking at some Chaos stuff I do own 5 Soul Grinders.  I think I might have a model problem.

Overall this formation is really fun and while it can sneak out a win or two I don’t expect you to get far up in the food chain of competitive 40k. Still when you get that super sweet 18 inch charge into a pre Invisibility unit of Super Friends you do feel like a skull champion of the Blood God.