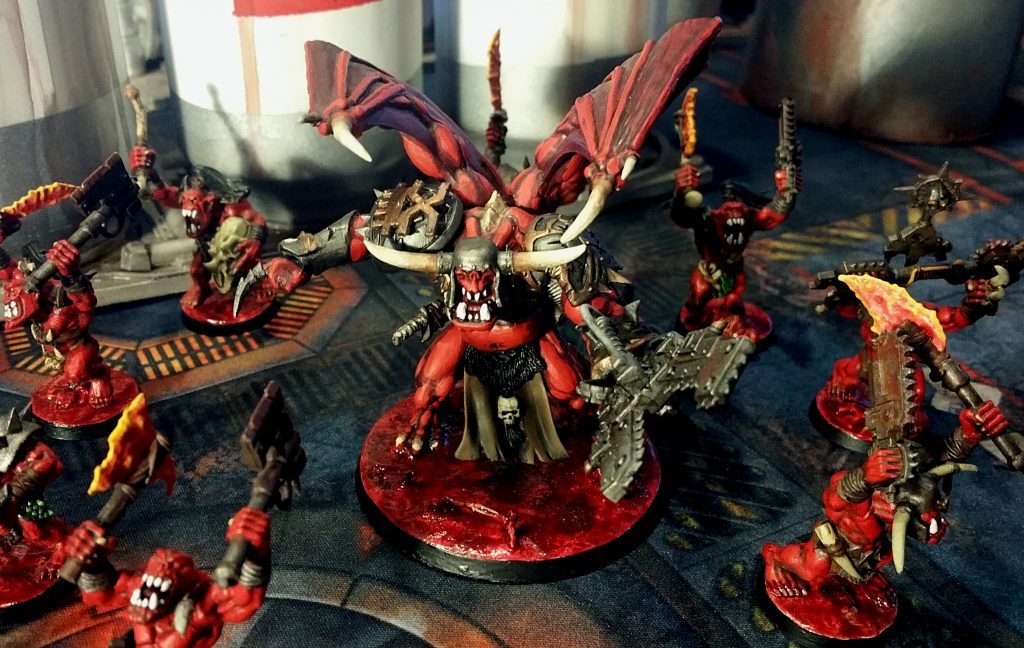 Loopy’s newest article brings some thoughts on his experiences with the Daemon Prince. If you find this review helpful, check the Tactics Corner for more great articles!

The Bloodthirster gets a lot of play and for good reason. He’s a monster; a freight train of hate and spite which can render other units to gelatin. This doesn’t mean that the Daemon Prince doesn’t have a place in your lists and in your summons depending on the situation. Of course, as usual, I offer the caveat that my job here isn’t to denounce (or praise) its very existence in your games. My aim is to help folks get an idea of how to use this unit if they want to. If you have different ways to use this unit in your games, please add your constructive comments to the conversation in the comments below. 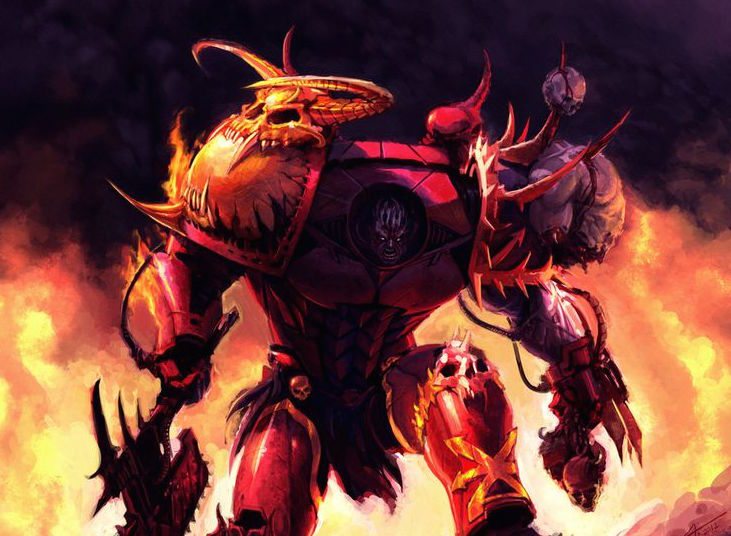 In general, Daemon Princes have an impressive profile. The version in the Khorne Daemonkin codex boasts 5 Attacks at Weapon Skill 9 and Initiative 8. These stats ensure that a flurry of strikes will actually land on your opponent’s units. The somewhat disappointing Strength of 6 can deal with infantry and light vehicles with ease, particularly due to the attacks enjoying AP 2. Even if a Khorne Prince’s attacks did fail, it is protected from any morale issues by its Fearless special rule. The Daemon Prince’s Toughness 5 is not as much of an issue as it once was since Strength 10 shooting and assault in general have become less of a problem in recent editions. Also, a Prince with wings should be able to pick and choose its fights.

Although the Daemon Prince works fairly well in most combats, many of the units which plague the game now, such as the Wraithknight and Space Marine Bikes, have a toughness that you’d really like a unit as pricey as the Daemon Prince to still wound on a 2+ rather than a 6+ or 3+ respectively. Fortunately, the Furious Charge granted by the Prince’s Daemon of Khorne ability mitigates this slightly.

Just because the Daemon Prince looks like it should be able to kill big threats, that doesn’t mean it’s designed to do so. Avoid fighting Superheavy Walkers and Gargantuan Monstrous Creatures with your Daemon Prince like the plague. Against Superheavy Walkers, the Daemon Prince of Khorne finds itself severely lacking, barely doing any damage and risking almost certain instant death from one method or another. You may be able to put a wound or two on a gargantuan monstrous creature, but their usually impressive melee and Stomp attacks can be extremely dangerous.

Instead, the Daemon Prince should flit from one weaker unit to another, outclassing each one. The plastic Daemon Prince model is actually rather small and can hide easily behind most line-of-sight-blocking terrain. Even if you don’t reach combat in turn 2, you might be able to protect it. One trick I like to use against small units is to only score a Hammer of Wrath and then a Smash attack on the turn I assault them, then I actually try to outright kill it on my opponent’s turn. This might save the Daemon Prince from being killed in the shooting phase. Note that this trick isn’t so great against units with Hit and Run or very poor Leadership.

If you go after a big mob, try to back it up with another unit, such as Flesh Hounds. The situations where you use a Daemon Prince to go after other impressive close combat fighters is rare, engaging only when you believe your Weapon Skill and Initiative will win you the day. Indeed, I would assault a Bloodthirster of Insensate Rage with a bog-standard Daemon Prince in a lot of situations. Even if the DP doesn’t take out the beast, it will probably put on some wounds. You can even use Challenge shenanigans to tie the monster into a fight with a lesser character while your Daemon Prince does work. 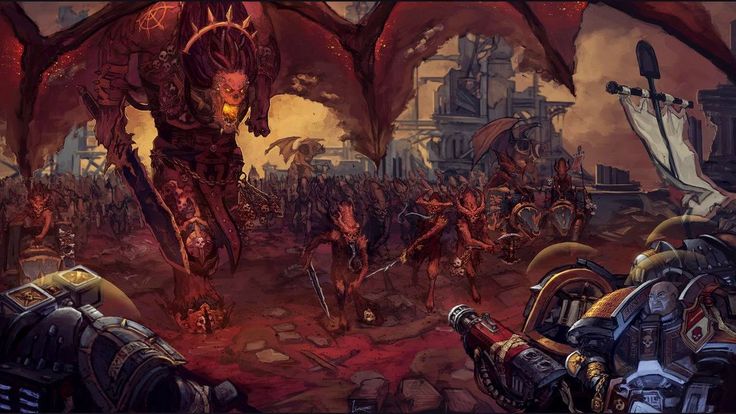 Although I won’t ever tell you not buy a Daemon Prince for your lists if you want to, a 4-wound Daemon Prince’s cost of 160 points (180 with a 3+ save) is a bit daunting. The Khorne Daemon Prince also suffers from mobility issues. As a Monstrous Creature, it can’t fit in a transport. It has two options for better mobility: wings and deepstrike. Wings bring the cost of an armored Daemon Prince up to 220 points, which is only 30 points shy of a Bloodthirster of Unfettered Fury which does everything a DP can do and a bag of chips.

When you’re dealing with a unit that can be considered substandard compared to other choices, always think about the things the unit can do that the others cannot. The one thing that the Daemon Prince can take advantage of that the Bloodthirsters can’t is wargear. The Daemon Prince can select items from the Gifts of Khorne and Artefacts of Slaughter lists.

Some of the less than stellar choices bear at least trying. A Combat Familiar could help your Daemon Prince better match the Attacks profile of bigger monsters, though it is rather pricey at 15 points. If you find yourself plagued by Eldar and Tzeentch Psykers, you could kit out a Daemon Prince to lead a Vanguard strike against the enemy’s psychic firebase by giving it Wings, a Collar of Khorne, and the Brazen Rune. The Prince will enjoy a 3+ Deny the Witch until it pops the Rune, causing any Psyker unit within two feet to perils on all doubles for one turn, presumably the turn of your big assault phase.

Giving a Daemon Prince Goredrinker is a rather expensive prospect, but it increases the character’s unfortunate strength to 7 (8 on the charge) and, if you work on one or two small units first, you might be able to eliminate one of your opponent’s greater threats, gaining a bucketload of Strength 10 attacks in a single round. Whether this is comparable to the Bloodthirster of Insensate Rage is up to you to decide.

Of course, the obvious choice of artifact is the Blood-forged Armour. If you’re not running a large squad of Hounds with a Lord at its core, you may want to consider the Daemon Prince with Blood-forged Armour. Since you’re already paying 20 points to add a 3+ armor save, it’s not really a stretch to add Feel No Pain and Eternal Warrior for an additional 30 points. This might be especially true in lists where your Hounds are broken up MSU-style. I encourage any player who is considering actually spending points on their Daemon Prince to playtest this specific build. I have used it to some good success in my games, but its big drawback (as with anything fun in this game) is mass shooting. Even flying, it still can fall very easily to mindless bucket o’ dice tactics employed by the Tau and Eldar. Terrain is your friend. 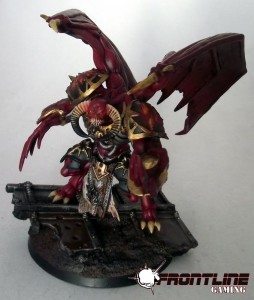 Other than as an HQ choice in a Combined Arms Detachment, the Daemon Prince of Khorne may be taken as a part of the Slaughtercult or Charnel Cohort Formations. The Daemon Prince does not rate high enough in the opinion of the Prince of Blood to be counted among the units allowed for the Lord of Slaughter Command choice in the Blood Host Detachment. With a Slaughtercult, the Daemon Prince competes very heavily with the Chaos Lord, which is often used as a bearer of Kor’Lath or as the brute force behind a tide of Flesh Hounds. The Daemon Prince is a good option for anyone who wants to use the Charnel Cohort. That formation’s main conceit is Deepstrike and the Prince is a lot easier to deepstrike around than a Herald stuck in a unit of Bloodletters or Bloodcrushers. It’s also a lot safer to deepstrike the Prince itself due to its small footprint. Nothing says you actually must deepstrike the Prince, either. Wherever the Prince is positioned at the end of turn 1 can be your new Daemon summoning vanguard location. Just be sure to protect it from enemy fire somehow. 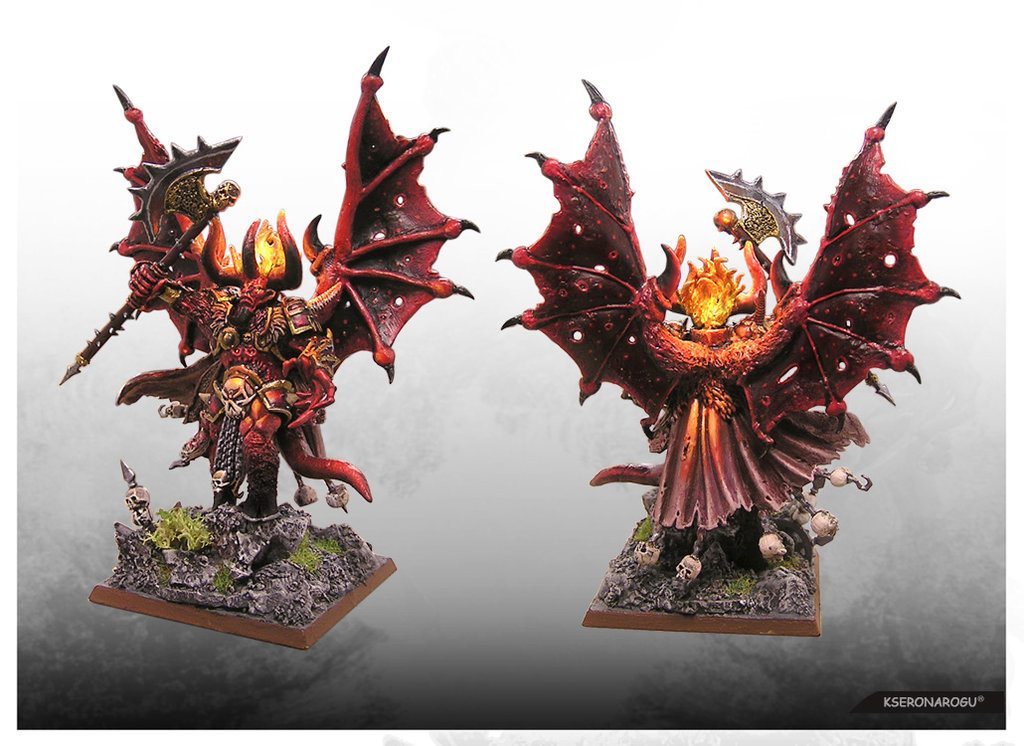 Many units in the KDK codex which are considered situational or subpar in a list have a tendency to shine a little brighter when summoned. The Daemon Prince is not one of these units. You would rarely sacrifice a good character in order to bring forth a Daemon Prince and lesser characters have questionable Leadership scores. If you’re reasonably sure that a character is about to die in a forthcoming close combat, then perhaps making up for that by preemptively sacrificing it to make a Prince isn’t such a bad idea. However, in many situations, when time is of the essence and you only have 7 Blood Tithe Points, a Skull Cannon or a unit of Flesh Hounds will be better choices than a Daemon Prince with armor, whether with wings or not.

It could be worse. I’ve been considering going back to the Daemon Prince after using a Lord in a unit of Hounds for a long time. The Lord can get extremely pricey and the number of Hounds needed to protect him can be hard to maneuver, even with their great command of terrain. For smaller games, too, the Prince tends to shine a little brighter. It’s easier to hide from less units shooting at it and the units can be a bit easier to kill. The Daemon Prince with the Blood-Forged Armor is also a compelling choice when you’re running your KDK in Combined Arms Detachments instead of with a Slaughtercult because Feel No Pain may be hard to come by with only one choice on the Blood Tithe table per turn.

Of course, your Prince will be frustrated by armies which abuse Hit and Run, Gargantuans, Superheavies, and fun-crushingly reliable invulnerable saves. In these cases, fight fire with fire in other parts of your list, or simply proceed to the final stage of grief.