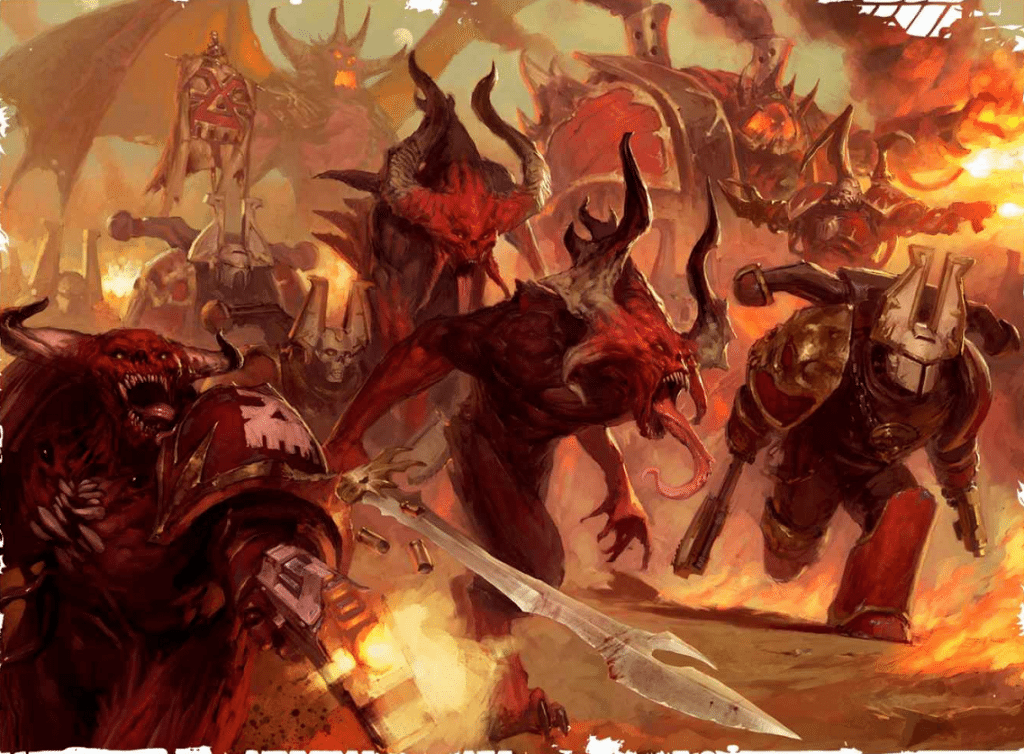 Although many Khorne Daemonkin players rely heavily upon the flexibility and Objective Secured provided by Combined Arms Detachments, some of us do make use of the Blood Host Detachment to build our armies. Check the Tactics Corner for more articles and tactics!

The Khorne Daemonkin Blood Host Detachment is more flexible than some Combi-Detachments and more rigid than others. It follows the tradition of 1+ Core choices with 0-1 Command and 1-10 Auxiliary choices per Core.

Only one Core choice is provided in a Blood Host. This Slaughtercult requires one of a small selection of HQs, 2 units of Troops (Bloodletters, Chaos Space Marines, or Berzerkers), and at least 1 unit of Possessed. Spawn and Cultists may also be taken in this Formation. The expensive unit of Possessed are what sticks in players’ craw, though. Even though the Formation provides an additional non-summoning Blood Tithe Table choice, the 150 points for 5 models with no more survivability than your average Chaos Space Marine is a tough pill to swallow. When I use the Blood Host, I often buy my Possessed a Rhino for them to drive around in. I like providing a Rhino as an easy tithe generator unless my opponent ignores it, in which case I can just drive around scoring and threatening across the board.

Depending on your list, certain options within the Slaughtercult are better or worse. One could do worse than selecting inexpensive and versatile Bloodletters, providing them either Feel No Pain or +1 attack with the Tithe table depending on your opponent. The Cultists really won’t benefit much from the additional Tithe choice, so if you’re running an additional Combined Arms or Allied Detachment, I would save your Cultists for the Troops needed for that. Objective Secured Cultists are better than purely sacrificial Cultists. For the HQ, I personally prefer taking a Lord on Juggernaut to accompany my Flesh Hounds into combat, but you may also need to save some points by selecting a Herald instead, possibly providing Rage to a unit of Hounds with its Greater Locus.

The Blood Host does have a few one-unit “Formations”. One is called the War Engine which allows a player to easily round out their list. You get your choice of a Helbrute, Defiler, Soul Grinder, Forgefiend, Maulerfiend, or Lord of Skulls. Although these choices pale in comparison to the cornucopia of options in the Great Waagh!-Band, this is still something Space Marine Battle Company players certainly wouldn’t mind having. The Lord of Slaughter Command choice includes the Bloodthirsters and the Lord of Skulls. This makes it rather easy to run a Bloodthirster of Insensate Rage / Be’lakor combo list. 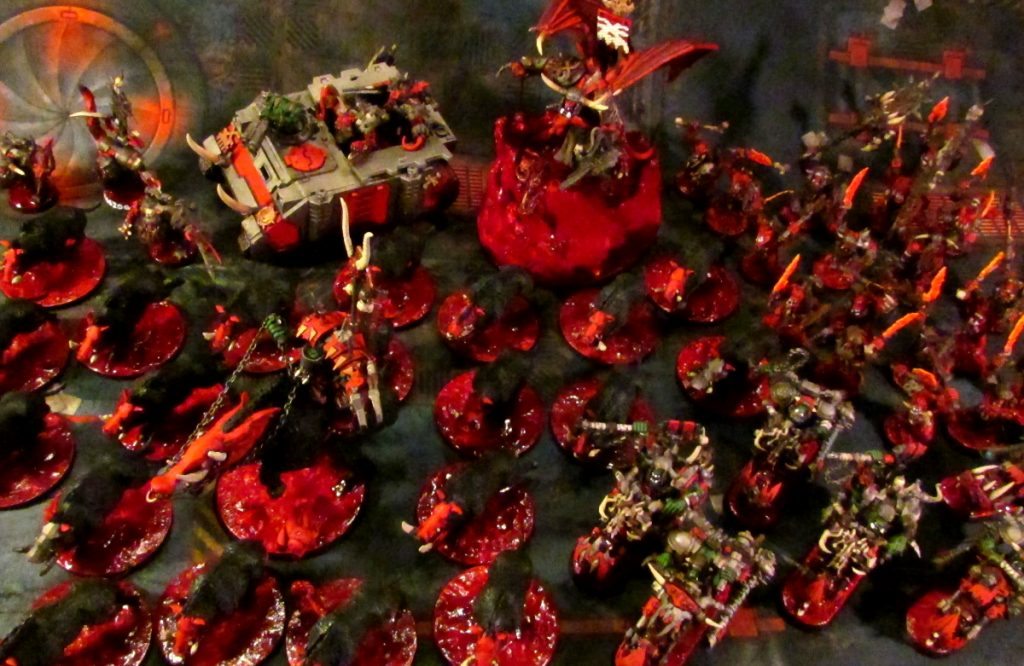 MORE Blood for the Blood God

The main reason one would choose to build their army using the Blood Host is that it provides your army one additional Blood Tithe point at the beginning of your turn. This can give players a pivotal advantage against savvy opponents who are intentionally starving you for Tithe. Many players will nickel and dime your army until just the right moment, then clear away swathes of units all in one go, making it difficult to use the Tithe table to take little advantages throughout the game.

Anyone who’s played against any of the popular (and frustrating) alpha strike shooting armies knows that running KDK is rarely all about how many Bloodthirsters you can drag screaming into the Materium during a game. Use your points to bolster your initial charges, grinding entire units to offal, scoring more Tithe, and moving on to the next thing. Sometimes just using your points for Rage and Furious Charge across the board can turn the tide if you time your assaults right. Give yourself +1 attack if you expect to be stuck in and fighting or if you’ve got more Daemons and fewer CSM. Really think about every choice before you make it. Ask yourself “What does my army need right now to succeed?” Sometimes you’ll find that a single Bloodthirster standing like a dope for a turn before getting shot to death will provide you nothing. 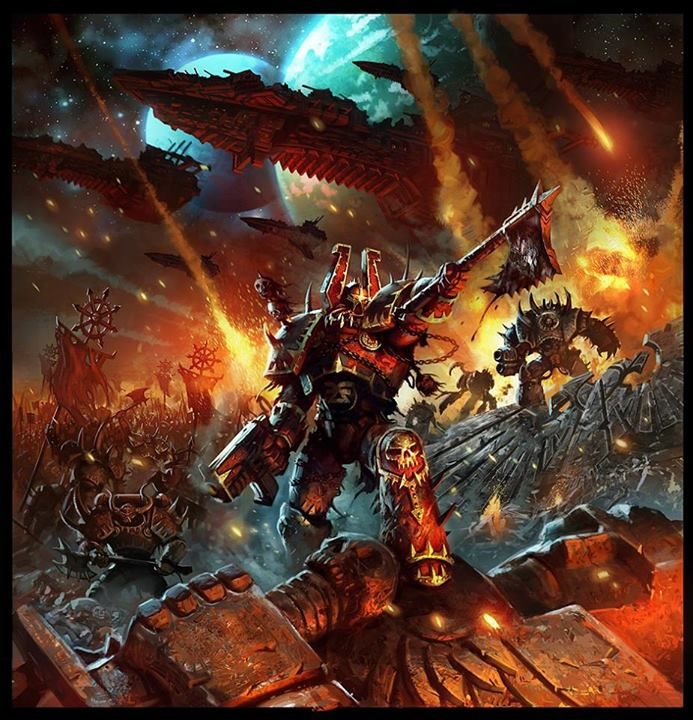 MORE Skulls for the Skull Throne

The only Auxiliary Formation in the codex that I’ve ever seen anyone use is the Gorepack. That’s not to say that everything else is garbage, but there are only so many points in a list and a lot of these Formations add up really fast, particularly with any upgrades needed to help make them performant on the tabletop.

The Brazen Onslaught, with its small, elite units of Chaos Terminators and Bloodcrushers could boast an impressive number of attacks when combined with certain selections from the Tithe table, which will be a bit more common in a Blood Host. Unlike other units, those in the Onslaught do boast a a level of survivability requiring the application of somewhat intentional firepower to eliminate. Khorne’s Bloodstorm would be interesting if Raptors and Warp Talons were not extremely costly for their questionable survivability. Although the Formation does enjoy +1 strength on Hammer of Wrath and Vector Strike, you’re probably better off turning to a Combined Arms Detachment to get your Heldrakes. The Charnel Cohort should have straight-up been a Core Choice. Granted, the Formation doesn’t do much to solidify the conceit of the Codex, which is to marry Daemons and CSM, so that’s probably why they are not Core. If you’re looking to back up your army with a horde of Khorne Daemons with some Skull Cannon fire support, you can choose this. However, the Bloodletters in this Formation can easily get confused with those from the Slaughtercult, so think about that possibility when painting your models and try to keep them somehow differentiated. The Charnel Cohort is also very pricey and probably best left for games of over 2000 points or taken alone, outside of the Blood Host.

The Gorepack is the number one choice for most KDK players who use the Blood Host for a good reason. First, Flesh hounds are good, top to bottom. Their decent attacks, decent survivability, good Weapon Skill, incredible maneuverability, and resistance to debuffs such as Doom make them an excellent choice for any army. When taken in a Blood Host using the Gorepack, they are provided Preferred Enemy (Psykers) and Hammer of Wrath. Both of these abilities make them even better against Eldar and gives them an early attack in case they assault through cover. Being able to take four units of Flesh Hounds makes it easy to use a different Detachment to add Heldrakes and Rhinos to your list rather than having to spend all your slots on Flesh Hounds. The two units of Chaos Bikers could be seen as a bit of a tax, but their ability to take two special weapons per squad and the fact that they gain Move Through Cover makes them fairly valuable. Try out both Melta and Plasma to see which you feel is the most useful. With all the Marine bodies and bikes in a lot of lists, Plasma is a dangerous, yet compelling choice over Melta. 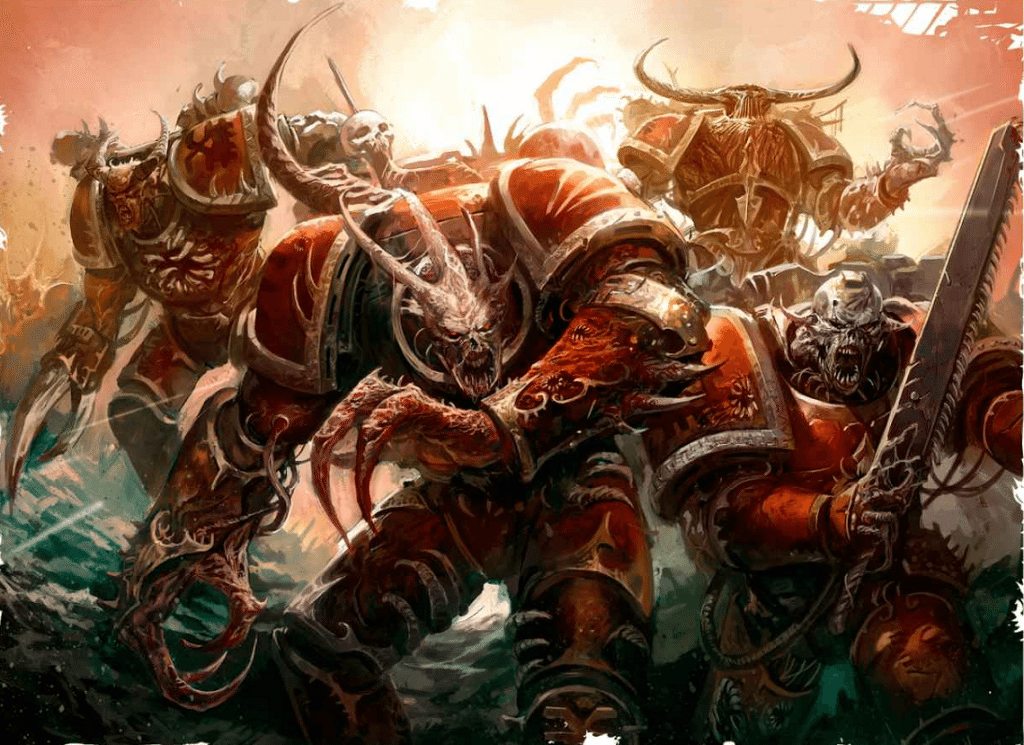 Shoring up the Missing Pieces

A single Combined Arms Detachment or Allied Detachment of KDK, CSM, or Daemons can really help add utility and punch to any Blood Host army. This is where you’ll add your Lord with Kor’lath, Heldrakes, Rhinos, ObSec Cultists, or Be’lakor with Pink Horrors to round out whatever list you’re trying to build.

I’ve been running CAD for some time and I have been considering making a return to the Blood Host. I have found the CAD approach to be rather anemic for Tithe points. Even with allies, the KDK can be somewhat fragile or can come up short in assault. Summoning more units and increasing offensive power throughout the game does help.

Please share your experiences below. Do you have better luck with the Blood Host, CADs, or a combination of the two?