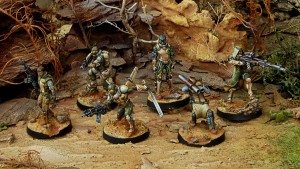 The nation of Haqqislam, the New Islam, is located on the planet Bourak in the Human Sphere.

“Haqqislamite doctrine is built upon the concept of the Search of Knowledge, the pursuit of artistic, philosophical and scientific knowledge through which Humanity shall reach illumination and commune with divinity. Such is the value and the appeal of the doctrine of Haqqislam: it restores every single person to a place of protagonist within the great scheme of things.”

Fragment of A light in the dark. 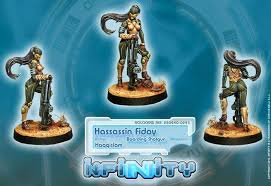 These are the cunning assassins with the ability to make themselves look like the enemy. In game these troops can deploy right outside the enemy’s deployment zone as a marker and cannot be targeted by Ballistic Skill attacks. It takes two successful Discovery rolls to unmask these units but by that time it is too late. Armed with a shotgun and Martial Art Level 3 they can make short work of any line trooper. 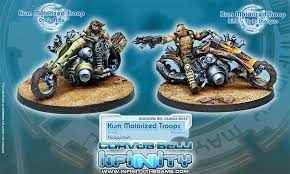 A rather inexpensive unit at 10 points means fielding multiple isn’t that bad for lists. Riding their Motorcycle these units have a great range of distance (8-6 Move) that they can cover the field. Armed with Smoke Grenades and Chain Rifle the Kum can flank their way to the opponent while masking their advance. Having Fury: Extremely Impetuous means that these troops have to move towards the closest enemy unit.

Armed with Flamethrowers these units are great for protecting deployment zones and give cheap orders to order pool. The large tear template of the Heavy Flamethrower hits at a Damage 14 and causes the opponent to make multiple Armor saving rolls until successful. Meaning they can take out a multi-wound unit or TAG. Using an Intuitive Attack with the flamethrower can destroy camouflaged units along with the WIP 14 needed to make the skill check. 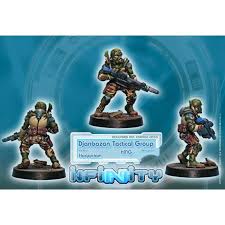 This Medium Infantry has access to the Sniper Rifle and Heavy Machine gun. With the Multispectral Visor L2 the Djanbazan is capable of shooting through Smoke templates and ignores the penalties of Camouflage units not in marker form and ODD. The Djanbazan also has Regeneration allowing it to heal with an order and a successful PH 11 roll.

This list includes the Haqqislam starter pack and units listed above giving you access to objective grabbing Specialists and plenty of orders for each group. Only a few blisters and unit packs are needed to complete this list.

Light Infantry are the bread and butter of Haqqislam lists and that means many units don’t have access to high Armor values nor special ammo weapons. Facing lists against Heavy Infantry and Link Teams can be frustrating. Hassassin Fidays cannot disguise themselves as alien species which lowers their Impersonation ability.  Kum bikers have Fury: Extremely Impetuous so they do not benefit from cover and have to move towards the closest enemy at the start of the turn.

List with Multiple link teams (Tohaa and Steel Phalanx) can out maneuver this list quickly. With the lack of high armor values the same thing goes when facing an Alpha strike unit like Ariadna Van Zant, Pan O TAGs, or Aleph Ajax. Missions that require going for objectives are the key to this list but if the Specialists are killed it becomes increasingly harder to score points. This list favors strategy and tactics over brute force to complete the mission.

I’ve been in love with the Haqqislam faction since I first started playing. They have some of the most beautiful sculpts in the whole miniature line and can be very brutal at tournaments. What are your thoughts of the Haqqislam Faction?

Post in the comments below and remember Frontline Gaming sells Infinity product at up to 25% off, every day!

← Playing an all-Harlequin list in a GT: Reflections on the Laughing God’s place in competitive play
Stormcast Eternals: Remaining Units →