Hey everyone, sorry for the delay in this article series! With the LVO, life got hectic, but we’re back on track, now. 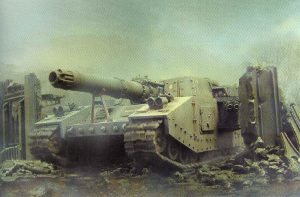 When it absolutely must be destroyed overnight, you call in the Emperor’s Fury Super-Heavy Company! That’s right, this is a formation of Super-Heavy Tanks! The mailed fist of the Emperor is made manifest in the form of squadrons of Baneblade chassis vehicles, delivering death and crushing the enemies of the Cadia. 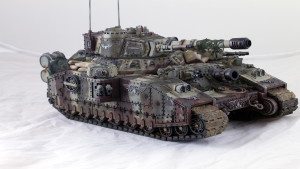 Obviously this only fits in larger games of 40k and formats which allow this type of list. Apocalypse would be the format that comes to my mind, but hey, if you wanted to squeeze it into an 1850pt game and play a 40k version of Ogre, that could be a lot of fun, too!

3 units in any combination from the following super-heavy tanks: 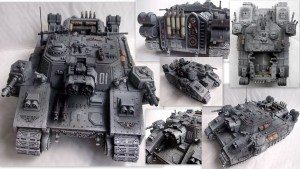 So, this is a bit of a silly formation, honestly. It’s only really usable in very large games. The entire Cadian Battle Group detachment feels like it was written assuming the player using it was playing apocalypse. Every formation in it tends to be very pricey and difficult to use in a game under 2.5kpts. However, putting that aside this is a fun formation. The combined shots causing a morale check on 4d6 could be useful, although outside of Deathstars I would assume anything shot by 3 super-heavy tanks would be well and dead after!

Causing enemy units to move as if in difficult terrain when near 2 is also a cool ability as it may help to defend against assaults. Not spectacular, but not bad. Lastly, repairing the tanks easier with the Enginseer is a fun addition as it keeps the big boys alive and shooting! That is easily the best ability of this formation.

Really, if you’re going to play a game using 3 super-heavy tanks, you may as well use this formation. However, for most of us that doesn’t come up as an option all too often.

As for selecting your tanks, if you are playing competitively (which at this scale, the game is so much more fun when played for theme and narrative) then the Stormsword is the clear winner. That said, a trio of Stormlords firing 90 strength 6, ap3 super bolter shells downrange doesn’t sound too bad, either! Really though, take the tanks you like as a game like this played for a good laugh more than anything else. Stick the Enginseer behind the tank you like best and go to town. If you’re using the Cadian Battle Group and took the Emperor’s Shield Infantry Company, bubble-wrap those bad boys and let the big guns sing!

Which 3 super-heavy tanks would you take in this formation? And as always, you can purchase Games Workshop product at up to 25% off retail, every day at Frontline Gaming!

← New ITC Terrain: Buy 2, get 1 FREE!
Playing an all-Harlequin list in a GT: Reflections on the Laughing God’s place in competitive play →