Jason here with another installment of Blood Angels, Hot or Not? where we take a closer look at the units in the much maligned Blood Angels codex and make a determination regarding their actually hotness or notness.

This week we look at the second half of the meaty man parts from Codex Blood Angels, the elites!  The elites section is really where the codex really shines though the Blood Angels sadly show the truth in the saying that everything that shines ain’t necessarily gold.  Without further adieu, Blood Angels, Hot of Not! Elites Part 2. 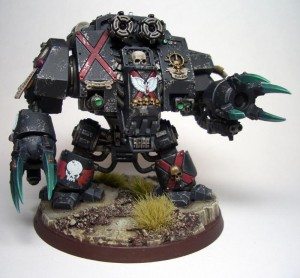 It used to be you could only take one of these guys if you took a squad of Death Company, but that restriction is long gone.  The Death Company version comes with the same stat lines as your run of the mill Dred, save for an extra base attack, and comes with the Blood Angel-centric Furious Charge, which is a nice touch on this guy.  Unlike the basic Dreadnought this guy comes with the Rage special rule, which will give you 5 S7 attacks on the charge if you take the Blood Talons.  Speaking of Blood Talons, they were nerfed with the new codex, unfortunately, and no longer let you make more attacks for each successful kill.  They are now just a big pair of Lightning Claws.  Not bad though for a anti-Infantry based Dreadnought. I would still take him in a Drop Pod and equip him with two Power Fists and call it a day.  If he survives your opponent’s first round of shooting and can actually assault something with 5 S10 attacks.  He is a bit more survivable than regular Dreadnoughts due to his ‘None Can Stay my Wrath’ special rule which allows him to ignore the effects of Crew Shaken and Stunned but it would have been a million times more helpful to have him ignore the immobilized effects. Le Sigh.  Overall pretty decent for a vehicle in a game that makes being a vehicle increasingly useless. 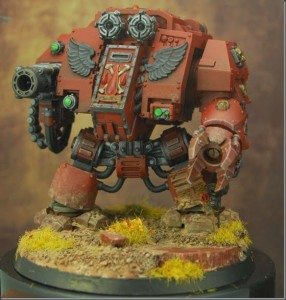 This is a Blood Angel specific unit and frankly is one of the best things they have going for them in the codex.  The dude clocks in with WS5 and has front armor 13, which is damn crucial in order to counter the prevalent S5-6 shooting we see on the tabletop.  He comes with Furious Charge, which only matters if you take him with no Power Fists, which will almost never be the case (or if he gets weapon destroyed I suppose).  The real beauty is his ability to take both a Frag Cannon (basically a two shot S6 flame template that is AP – but has the Rend special rule) as well as a Heavy Flamer in his Power First hand.  DECENT!  He comes in a the same cost as a Death Company Dreadnought but puts out a ton more firepower.  Throw him in a Drop Pod, use some Teleport Homers on a unit of Scouts and drop 3 S5 and S6 flame template shots wherever you need something killed, dead.  Thumbs up, Jabronies!

Yawn.  Though they do have Furious Charge and access to Feel No Pain via a Sanguinary Priest, the basic Tactical Terminators are used about as much as any other Tactical Terminators in the game, which is not at all.  They suffer from what Terminators have suffered from for years, which is not putting out enough firepower for their points cost.  They have a 2+ save but we might as well say they come with a 5+ save due to the amount of AP2 and 1 weaponry that would be instantly evaporating these guys the turn they show up on the table.  If I WERE to run these guys I would go all in and run a 10 man squad with a Sanguinary Priest attached and 2x Cyclone Missile Launchers. That would be 20 S4 and 4 S8 shots hitting something every turn they are at full strength and you could throw in a Librarian for Prescience and hopefully Perfect Timing to ignore cover but that’s a lot of points (over 500) for something that will just roll 1’s all game after getting hit by Lasguns and you smashing your models and all that shit.

Do we even have any other Terminators at this point?  The standard Storm Shield and Thunder Hammer Terminators are good in this codex and they are good in any codex.  The addition of having Furious Charge and the ability to run them with a Sanguinary Priest of WS5 and Feel No Pain makes these guys a VERY good choice.  Throwing them in a Storm Raven is probably your best bet since mobility is an issue with them and putting them in a Land Raider is a really good way to have an immobalized 250 point model on turn 1 from mass Grav fire.  You really do need to have a Sanguinary Priest with them, so another good tactic is to throw the Angels Wing jump pack relic on a Priest so he can get Deep Strike and then have them come down right in your opponents face. The Angel’s Wing allows you to scatter only 1 D6 and forces any interceptor shots to do Snap Fire. Take that fish heads!!

Other than having Furious Charge there is not all that much different from the standard Vanguard Veterans in other marine codices.  Not really a bad choice but in an overfilled Elites section you will almost never opt to take these guys to the dance.   They cost too many points to equip them like Assault Terminators and with just a 3+ armor save and T4 they go down pretty quickly.  Honestly without any special rules like the Ravenguard or ways to have them assault turn 1 when they Deep Strike there isn’t really any reason to ever take these guys.

The same as above applies to these guys. Nothing really other than the Furious Charge for being a Blood Angel which doesn’t really do anything. There was a time when the Blood Angels Sternguard were really good because you go the combi-weapons for like half what they cost in the Space Marine codex but that’s over and done with.  Just like the Vanguard Veterans I think GW could have gotten away with just not including them in this codex.  I mean, the only reason someone is playing Blood Angels at this point is to take the Blood Angel specific units because all the units other than the Assault Terminators are worse than they are in the Space Marines codex.

Another Blood Angels, Hot or Not? article down! Hopefully any fledgling Blood Angel players got some good advice out of the elites reviews.  For those of you who disagree with some of these ratings, what are some better way to play them? Any hot units you feel are more not (hot)? Let me know if the comments!  Thanks for reading.

14 Responses to “Blood Angels, Hot or Not? Elites Part 2”