HotSauceMan here with an article on Lords of War! Check the Tactics Corner for more great reviews!

Escalation brought us the introduction of apocalypse only units into 40k. At first no one wanted anything to do with them. But 7th edition solidified their place in the game. But between the Wraith Knights, Imperial Knights and occasional Storm Surge you tend not to see many lords of war on the battlefield. This may be due to various house rules that make them a liability more than an asset, but there are some very good alternative choice out there. I will mainly be addressing ones that are legal for ITC, but there are some gems out there that you can crush your opponents with. 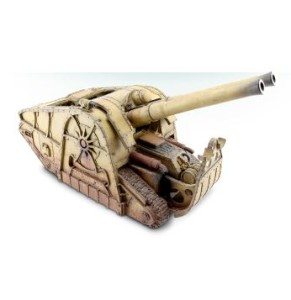 It’s a giant Basilisk, that’s it really. Nothing to special about this until you look at its relatively cheap price point, just shy of 300pts. With armor of 13/12/14(Yeah, its rear armor is stronger because that is where the gun is mounted, it’s literally shooting out it ass) it’s fairly survivable with 6 hull points. You will want to give it an enclosed crew compartment but that’s still keeping it cheap. Its gun where the secret sauce is though. It’s an Earth shaker cannon with massive blast and twin linked. Spamming artillery in both AM and Renegades is popular now so this can easily find a way into those lists. It does have a drawback though, it cannot fire against anything within 24in. If I was to play with it, I would hide it backfield with artillery carriages to bubble wrap it. Heck, with the Renegade’s special detachment you can literally fire it and where it lands it would leave a 7inch circle of difficult terrain. 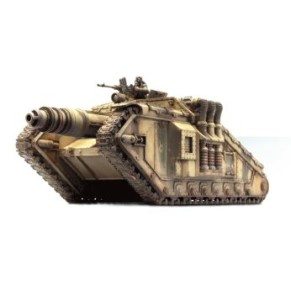 Following the doctrine of putting a giant overcompensating gun on every tank, we have the Valdor Tank Hunter. This guys is a bit pricy for what he brings, but he does bring a big punch with his main gun. The Neutron Laser sounds like something from a bad movie you find late at night, but it is a solid gun.  It is a strength 10 ap1 ordnance d3 with concussive is nothing to sneeze at. If it fails to penetrate, it can take a hull point off, but that is rarely going to happen. This guy is meant to go after other vehicles and is good at doing it. While he isn’t a Knight he can take one down with a few lucky shots. With Battle Company floating around, dedicated tank killers are what you need, it can even take some Lascannons to help with that. 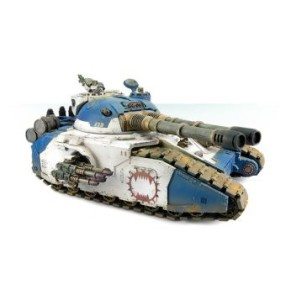 With what at first looks like a space marine Baneblade is actually a pretty potent killing machine. For just over 500pts you can get a 14/13/12 chassis with 12 hull points. Not bad for the price and pretty survivable against the str6 spam we get a lot in this meta. The real icing the cake is its guns. It comes stock with 4 Lascannon shots that are twin-linked and a Demolisher cannon. Not bad. Its main gun on the other hand comes with two firing modes. A 7inch blast with str8 ap3 or a small blast with str9 ap2 armourbane. This guy is meant to take on other tanks and super heavy tanks. He can also pack the heat on even more with the tank hunter legacy of glory, making him hyper-efficient at killing tanks 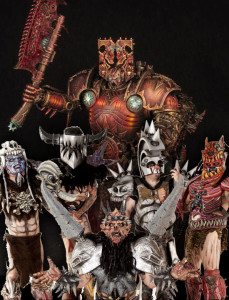 Yes this guy did get hit pretty hard by the fact that the Kytan Deamon Engine and the Chaos Knight came out and are significantly cheaper. But those guys don’t have what this lawnmower has, great shooting on a good platform. 13/13/11 can survive a lot of spam. But its two weapons are where it really it has the advantage. The Deamongore cannon is a hellstorm template with instant death. Not bad, it also has the Skullhurler (seriously GW, please don’t let the 12 year old sons of your employees name anything) which is an apocalyptic blast with ap3 that forces you to reroll saves. While it cannot stomp, it can thunder blitz, which can be pretty good. 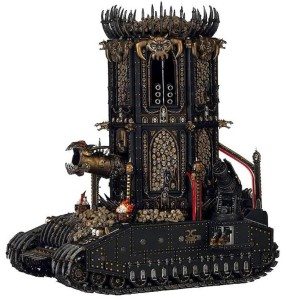 This one is admittedly dubious, coming from an old apocalypse book from 2008 and not legal in the ITC. By my god look at that thing! It’s like if a bastion made love to a Baneblade and drank while carrying it. This thing costs a pretty penny, being just shy of 800pts, but my god can this guy put out enough shots to make tau feel inadequate. It comes with Balemaw Cannon, two Doomfire Cannons, two Skullreaper Cannons and finally 2 twin-linked Skullshredders. I’m not going to say how many shots that is, but it can put out well over 20 wounds a turn. Which is good, because any phase it causes ten or more wounds, it regenerates a hull point. This along with IWND will keep this guy around for quite a bit. It’s also a deamon, so grimoire works on it. The most fun from this guy is his near immunity to psykers, causing them to automatically suffer a perils of the warp if targeted. So while this guy is questionably legal, if your TO lets you use, try it out and you might find yourself surprised.

While none of these guys can stand up to the much maligned Wraithknight, they can be pretty fun. Quite a bit of them suffer from old rules that are no longer in effect or just from other better ones coming out. Give them a shot though if you play any of these armies and you might find yourself a good decent unit.