Hot off the Presses! BigPig Tests Broodkin in a 40k Game!

You are here: Home › 40K › Battle Report › Hot off the Presses! BigPig Tests Broodkin in a 40k Game! 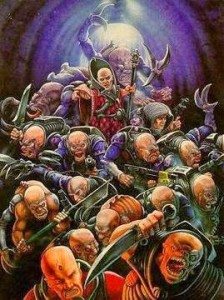 Hi everyone, BigPig here! I ran a quick game today with Ghosar Quintus Broodkin. List was 1850 to ITC standards. I originally thought of going with quad Flyrant and support with the GSC, but then after bouncing some ideas off my nWo teammates (the true sources of all things tactical) I decided to go with the following;

Thought process was that I could shove everything in the opponent’s grill turn 1, which appears to be the intent of the GQB.  Lictors would do the scoring or add additional threats to small enemy units, ala Lictor Shame. Mawlocs because they can pair with the many Lictors for maximum effect and the threat of the GSC keeps the heat off the Lictors allowing them to live long enough for Phermone trail to work.  I also wanted to see if the lowered Ld brought on the be Lictor formation could help with Telepathy powers.  I don’t intend this to be a turn by turn breakdown. Rather I’ll just summarize what each unit got involved in and accomplished in the game and then give impressions at the end.

My opponent ran a solid Necron Decurion which basically was as follows;

We ran ITC mission 3, Vanguard Strike and Kill Points, Night Fight. Unfortunately he got first turn and took it.  This is the first fail and weakness of the GQB as its trick deployment options seem to rely on going first and not getting seized on.  Psyker powers were Paroxysm and Catalyst, Paroxysm and Scream, Dominate and Invis, Fortitude and Hallucination.

He deployed a blob across his deployment line keeping the flayed ones in deep strike. I deployed the Patriarch with the Aberrants out of LoS about 12″ away from his right flank. I put the Faithful and the Magus in terrain nearby them at 18″ away but in LoS, also on his right flank. The Favored deployed right up the middle behind the middle LoS blocking terrain with the Primus placed in the unit. The Purestrains did the 1″ away thing right on his right flank in a ruin. My hope was that I would either seize and get a charge off on is bikes or have them draw fire from his ignores cover bikes. Flyrants took up the backfield with Venomthrope cover (though it wasn’t needed vs Necrons), 3 Lictors on the board on his right flank, left flank, and near the Favored to guide in Mawlocs. Mawlocs, Deathleaper, and 2 Lictors in reserve.

The Favored/Primus: These took several shots on turn 1 but only one or two died thanks to 2+ cover save from shrouded granted by the formation. They tried to multi-charge a unit of his warriors and Destroyers my turn 1 but failed a 3″ charge through cover (rolled a 4). Since this was a feeling out game, my opponent let me reroll and they made it in. No fleet, move through cover, or reroll is an obvious concern for assault based units. Once in combat they did surprisingly little. I put Catalyst on them turn 1 and turn 2 but they really didn’t do that much in combat (note that in retrospect this is probably illegal because the nid dex specifically says that Catalyst may be used on units from the Tyranid codex;  Hopefully something that gets addressed). I killed a couple warriors and lost one in return. The next turn he charged a wraith unit in. With my own FNP and that fact that I had put Paroxysm on those wraiths, I did ok and we basically traded 3 dead or so a player turn through the end of game turn 3. After that they didn’t accomplish much else as the unit was diminished. The Primus was paired off against wraiths so 3++ was hard to get through and 4+ with 4+fnp on the warriors slowed the Favored down quite a bit. If not for the Catalyst I would have lost this unit. To be fair, I did miss the Zealot on my Primus so didn’t reroll. That might have tipped the first combat round enough to force a failed morale by him, but probably not.

Ghosar/Aberrant: I put invis on these the first 2 turns. These guys moved up and multi charged his 2 bikes units on my turn 1. AGAIN I failed a short range charge 3″ through cover and again; no fleet or move through cover (Ghosar only) is a real gimp in the current configuration. Opponent let me reroll it so we could assess effectiveness of the unit in combat. If not for that reroll I would have completely lost that flank. As it is, the Aberrant/Ghosar unit killed his bikes, a unit of warriors, scarabs, hit and run off a wraith charge, his General and immortals and basically swept the right flank during the course of the game. The Aberrants were actually better at this than the Ghosar in this situation just because of volume of attacks. The Ghosar is really limited in the lack of rerolls and while I got past 3+ armor, I still had to contend with the reanimation protocol. Basically this is the same as if I was facing a dedicated assault unit with an invul save; Would have been difficult to deal with. The Ghosar seems to be a bully, not a dedicated fighter.

Faithful/Magus: This unit took a lot of fire on the first turn but held out very well, losing only 9 models (shot by bikes, destroyers, and a warrior unit). The bikes killed most of those via ignores cover, but the 2+ cover held after that. In return the unit did nothing of note. Honestly, they are guardsmen. Don’t expect results. BS3 can’t be counted on even with mining lasers and grenade launchers. The Magus’ access to telepathy was nice and getting invis helped to keep my ghosar/aberrant unit alive in combat.

Lictors/Mawlocs: With this not being an objective game, Lictors weren’t in play as much as they could have been.  Mawlocs did very well; All bullseyes thanks to the Lictors and killed a bunch of robots, but the Lictor/Mawloc combo is effective when you can actually pull it off.

Flyrants: Not that effective in this list, honestly. Necron toughness really slows them down but they still made great psyker batteries and Catalsyst and Paroxysm were effective.  While Flyrants are the go to Tyranid unit, I’m not sure they synergize with the GQB or any of the new options that GSC may bring.  So the question becomes, will GSC bring enough to make it worth not taking Flyrants when trying to make the most effective list possible.

Venomthropes: Useless in this list. No long range alpha. They are basically there to try and weather a drop pod or two when going second. Venoms over malanthrope just because I wanted the option of split deployment etc.

The GQB really does put turn 1 pressure on, but a big difference if you go first or second and there is always the threat of stolen initiative. The formation itself is a bit schizophrenic in it’s make up. You have 2 true assault units that really aren’t able to deal with a dedicated assault opponent in the Aberrants and Favored. The other units aren’t really able to take advantage of the assault on turn 1 option or are too small (genestealers) to make a difference. Also, the formation really suffers from a lack of ability to reroll attacks and reroll charge distances/ignore terrain. Without fleet every charge you set up is a gamble. This may be the biggest downfall of the formation and, ultimately, the models in what will hopefully be a minidex.

I liked the Favored, though they weren’t fantastic. Think weaker genestealers and you have them in a nutshell. If the minidex brings the ability to spam them and then assault on turn 1, now we are talking. If not, I guess 7pts for genestealers that don’t have move through cover and a lower I/WS is still pretty good when used as a horde. 2pts more than a hormagaunt gets you an extra attack, strength, toughness, rending, and armor. Not bad, but with just access to 12 in the formation, it was limiting.

The Faithful are simply cheap objective campers. Fearless campers that might get lucky and snipe. I was underwhelmed by their shooting. Aberrants were a solid choice with FNP and lots of high strength attacks they showed themselves well. I was underwhelmed by the ghosar also. Think broodlord damage output and that’s him in this matchup but he is much more expensive. I guess against marines or such he would do much better, but again he would not do well against a dedicated combat unit.

I felt that telepathy did add a lot to the army and will be nice for the ‘Nid army to have some access to. Invis was nice. I never had the opportunity to use Shriek on the Magus though and the only use of Hallucinate was dispelled. Once we can field a true “deathstar” type unit, then invis will help.  I could see an invisible unit of shrikes being a real threat, or even an invisible unit of 3 Melee Carnifex.  Would those units be meta breaking?  Probably not, but it does give Tyranids some other play options.

Regarding the list, I feel like the GQB really would pair better with a second wave of hard melee rather than the surgical sniping of Flyrants/Mawlocs. They take the turn 1 shooting pressure off long enough to get something up the board and in position to assault on turn 2. They actually have me toying with the idea of an all melee force. It would have a bunch of blind spots, but would at least work better than nids can do now since the GQB can fill in some blanks.

Ultimately though, this formation is somewhere around a B- at best based on my initial toying with it.  Now, granted, this is just in reference to this particular formation which is limited by the fact that it is including only the models in the exact numbers that come with the boxed game.  In a way, it is akin to the formations in the Stormclaw expansion, which nobody would expect to really add that much.  The formation’s special rules are gimmicky at best and with the odd loadout of units can be really hard to make work.  Nid players are still excited because opens up a new ally, new psyker powers, and additional options.  Hopefully the command benefits of a specific formation/Decurion from an actual minidex will give more choices in deployment and construction.

What do you all think of the new Ghosar Quintus Broodkin?

And as always, you can order GW product at up to 25% off retail, everyday at Frontline Gaming!

11 Responses to “Hot off the Presses! BigPig Tests Broodkin in a 40k Game!”