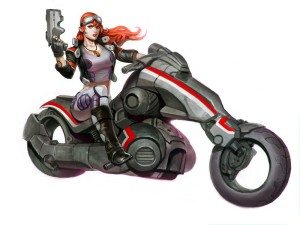 When a computer AI says it’s your friend and it’s totally not trying to kill you… It’s trying to kill you. So let’s try and kill it right back! Today we are looking at Aleph and how to take them down. For more articles like this, visit the Tactics Corner.

Aleph is the most high tech of all the armies in the game. Their units have amazing stats, powerful weapons, and the highest quality equipment. But just because they are sleek and clean looking doesn’t mean this army won’t go toe-to-toe and slug it out at close range or in close combat- in fact many of its units prefer to be up close and personal!

Armed with only a Combi rifle and ARM 2, the Sophotect isn’t much of a fighter. But it IS a Doctor and Engineer and can make good use of those skills with a unusually high WIP of 15. On top of that this unit has 6-4 movement and improved durability with No Wound Incapacitation (NWI). Expect this unit to stay out of line of sight as much as possible then utilize it’s high mobility in the end game to try and secure objectives.

Myrmidons are straight up awesome. Optical Disruption Device, smoke grenades, Nanopulsers, Martial Arts L3, Kinematic L1, BS 12, and ARM2 all for a reasonable price – what’s not to love? They do have a single option to take an assault hacker – it’s not a horrible choice, but it is expensive. Options to take Chain rifles, Combi Rifles, or a Spitfire are fine if not slightly boring – but the ability of the Myrmidon to stack the odds in its favor with throwing smoke then firing from cover while protected by ODD is where its real power lies. For the bargain basement price of 16 points expect to see at least one of these models in an Aleph player’s list since it synergizes well with the entire army by providing smoke screens and direct template weapons. 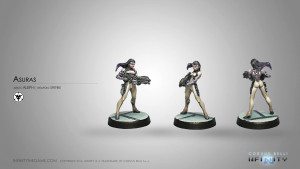 Beautiful and utterly deadly the Asura is basically a light TAG, only smaller and easier to hide, with some amazing stats. She can take a Spitfire and become a one woman wrecking crew, but the smarter player is taking her hacker profile which takes good advantage of her WIP 15, BTS 6, and amazing durability. She may only have a Combi Rifle in this profile, but at BS 14, she can still do serious damage. But what makes her an absolute beast is her L3 MSV, allowing her to attack camo markers without having to discover them first. This single model can clear an objective, capture it, and hold it making this a one fembot army.

While there are more and more motorcycle equipped models in Infinity, most are cheap disposable units. Penthesilea on the other hand is an investment in points but she is a heavy hitter instead of a cheap throw away troop. With ODD, a monofilament CCW, and set of weapons for every occasion there is not a single model Penny cannot take down single handedly regardless of armor, camo, or location and she has NWI making her more durable than she appears. Without any sort of specialist profile, Penny is a straight up killer. For her points, she won’t have a place in every list, and she can be tricky to use, but if the player using her is experienced, she can be up the board murdering your troops in shooting or close combat very early in the game. 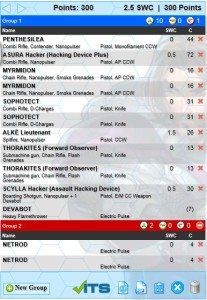 Here is a list that isn’t using a whole lot of SWC, but is well rounded and focused on scoring points; it has 6 specialists (2 of each flavor)- all of them good ones, redundant sources of smoke, the ability to see through said smoke, a motorcycle mounted “trouble shooter”, and a couple of spare order generators to swap into the main group to replace the inevitable loses.

So how do you go about pushing the reset button on this army?

A number of Aleph profiles make use of “No Wound Incapacitation” or NWI, effectively giving them two wounds. You can deprive them of this advantage by using weapon with exotic ammo types like Shock or Viral. Aleph players hate having to deal with Multi-Rifles, Multi-Snipers, mines, or their Viral counterparts because they can bypass NWI and send their expensive models straight to the dead state. The other thing you will find they hate is using cheap flame weapons. Even if it doesn’t cause a wound it strips them of their ODD- A Myrmidon without ODD isn’t nearly as daunting to face! The same goes with direct templates in general. Aleph will often boast superior stats in one area or another and forcing them to dodge or take an unopposed hit removes many of their benefits.

Hunting your opponent’s Lt. isn’t always a viable tactic; however Aleph has fewer Lt. options than most and they tend to be expensive. This means they are forced into a choice of using this impressive, expensive model, or hiding it and feeling like they’ve wasted points. With carefully study beforehand you can learn which few models have the ability to be a Lt and without much trouble can quickly determine who needs to die first- In ITS losing your Lt. is a near death sentence.

Finally, Smoke and Camo options should generally be avoided since Aleph has some very good access to Visors… unless you are talking about Zero-V Smoke or TO Camo. If you really need to stay invisible you can look at using White Noise programs or performing hacking out of line of sight. While there will be plenty of hackable targets in an Aleph list you will find their hackers to be difficult to take down since they tend to be sporting good WIP and BTS.

Hooray! I made it all the way through without a single Terminator joke! Do you play Aleph or have you faced off against them and have any tips or tactics? Post them below and help prevent the eventual robot uprising. As always, Frontline gaming sells Infinity products for up to 20% off every day!

Posted on March 2, 2016 by Casey Roberts in Infinity