We can all agree that monkeys are awesome. I think we can also all agree that murderous, red-faced, giant monkeys are stuff of nightmares. Let’s take a look at how to spank the Morat and the rest of the Combined Army. For more articles like this Visit the Tactics Corner.

For a long time the Combined Army (CA) was considered non-competitive due to their points cost. But with 3rd Edition out, a slew of new units, and some amazing looking models the CA has come back in force. The CA are an army of focused elites, usually excelling in one area at the expense of not doing so well in others. On top of that much of their abilities and equipment don’t exist anywhere else in the game. This is an army that can take a nasty hit then shrug it off and smile. Let’s take a look at some of the things you need to be on the lookout for:

This Sith Lord looking model has a nasty bag of tricks. His 6-2 movement is a little odd at first (“6-2 is just the same as 4-4!” you might say) but it’s exponentially better than your typical 4-4. This gives the Umbra an extra two inches to move forward before using the second half of his order to do something nasty like shooting, hacking, or punching- Couple that with his Forward Deployment skill and you have a model that can get into position very easily. He also has a strong WIP stat that makes him an effective point scorer when armed with a Hacking Device Plus, and an enviable load out of weapons (K1, Spitfire, and Boarding Shotgun) make him dangerous on the offense. No Wound Incapacitation (NWI) is just the icing on the Umbra cake giving him twice the durability as most other units. 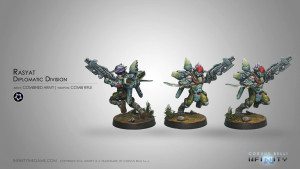 An ARM 2, AD Combat Jump model isn’t exactly special. Neither is one with Martial Arts L3 or Natural Born Warrior and a Double Action (or AP) close combat weapon… But one that has all of that is unique if not pretty darn sweet! But what really sets this unit apart from the crowd is that it has Zero-V Smoke. The Rasyat can walk in from the side of the board, throw a few smoke grenades on top of a sniper or Total Reaction remote freeing the rest of the army to move with impunity. As a killer the Rasyat is nothing special, but in a support role it is fairly unique and powerful. With its boarding shotgun or Spitfire it can be tough roadblock to deal with as well. Taking opponents by surprise then shooting and stabbing them is the pinnacle of Morat diplomacy. 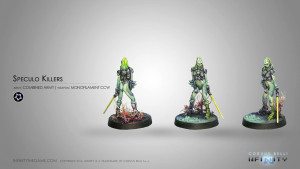 With MA L3 and a monofiliment CCW, there is nothing the Speculo can’t kill. With Impersonation L2 and smoke grenades, there is no one the Speculo can’t get to. This is a pure assassination model. Even if the CA players opts to not try and put it in your deployment zone, or even use it offensively, he can place it anywhere he wants it on the table and deny that area to their opponent. Nothing wants to get close to it. The one positive aspect is that if a CA player puts an Impersonation Marker down you know exactly what it is. The three constants in life are: Death, Taxes, Speculo Killer… but not necessarily in that order. 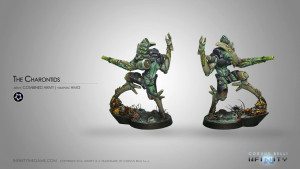 Are you hidden as a marker? Screw you- Multispectral Visor L3.

Are you in cover or do you have amazing BTS? Screw you – Plasma.

Do you have a cube? Screw you-Sepistor Plus with WIP 16.

Did you cause a wound? Screw you – 2 wounds AND NWI.

Did you kill it? Screw you – G: Mnemonica.

The Charontid is not cheap, but there are very few problems one of its profiles does not have an answer to. Give it a Hacking Device Plus and it’s one of the best hackers in the game.  Make it your Lt. and you never suffer a loss of lieutenant as its consciousness jumps to another model. 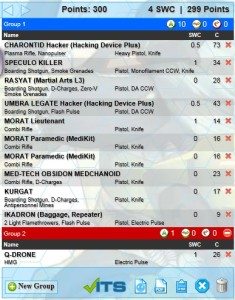 An impersonating unit, an AD Combat jump unit, a forward deploying unit, a total reaction ‘bot, and a heavy armor unit… That’s a lot of tools and toys to play with.

Now how do we deal with it?

Right away you will notice two things:

Points cost are the Achilles heel of CA. While they can ignore most things like “Retreat!” and “Loss of Lieutenant” they will be hurting for orders. This is where you get them. Ignore the Charontid and the Speculo if you can and focus your shooting on the specialists. The nice thing about this is that the Morats will hang around but generate only a few orders freeing you up to do what you need to.

The other thing is that there aren’t a whole lot of specialists- You may not be able to kill all of them, but by removing 2-3 through the use of an AD Combat unit or a Rambo type model you will severely hamper what the CA player can actually do. Sure the Umbra is great, so is the Mechanoid, but if you kill them both turn 1 then the CA player has to fall back on his secondary point scoring choices AND is down several orders.

In summary, the Combined Army isn’t bad. In fact there are a lot of amazing units to be had. The problem they run into is that they have trouble bringing lots of orders and specialists – the two things that really enable you to succeed in the ITS. A few suicidal troops thrown at their specialists and you should have no trouble coming out on top.

Have you ever had trouble with The Combined Army? Leave your thoughts below. Remember, Frontline Gaming sells Infinity products at up to 25% off every day!

Posted on February 29, 2016 by Casey Roberts in Infinity

← Khorne Daemonkin Review: Formation: The Gorepack
Signals from the Frontline #413 →