Welcome back to another wonderful installment of Blood Angels, Hot or Not? Check the Tactics Corner for more great articles!

Written by an equally wonderful and dashingly handsome man, who may himself be hot or not!  This week we take a look at the real meat of the much maligned codex, the Elites.  The Blood Angels are spoiled for Elite unit choices, ranging from bad to not too bad, and have so many choices I have to break them down into two posts again.   So here we go!  Blood Angels, Hot or Not?  Elites part 1. 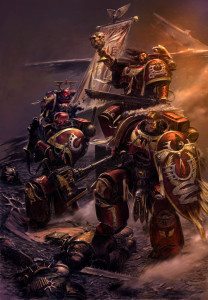 For me the Blood Angel Command Squad falls squarely in the middle of being terrible and kind of a decent choice.  On the one hand they are now elite choices, like all other Space Marine factions, which lets you take three squads of them within a CAD.  On the other hand, and unlike their Space Marine brothers, the Blood Angel’s Command Squad does not give you the option of upgrading two of the models into a Champion and an Apothecary (Novitiate) you just have to take those two models in your squad no matter what.  Only being able to take 3 special weapons does take some of the bite out of the squad but from a MSU stand point, they aren’t bad little squads to be running around. You can kit them out with jump packs and three melta guns and you have a highly mobile anti-armor threat with Feel No Pain and a power weapon for *only* 155 points.  With the prevalence of Imperial Knights having multiple drop melta squads is a viable way to deal with them. 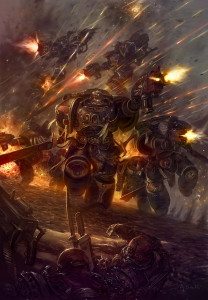 Ah, the eponymous Death Company.  One of the most unique and identifiable units from the Blood Angels faction, the Death Company continue to be a fan favorite and are responsible for many roflstomps on the tabletop worldwide.  With only a single additional attack to distinguish them from a basic Tactical Marine but costing 7 points more, at first glance they don’t seem to be all that great.  That is, of course, until you have a glance at their special rules.  They come stock with Feel No Pain, so no needing babysitting by a Sanguinary Priest.  They are Relentless, which means you can give them Bolters which they can use to blast the enemy before charging into combat but since these guys will usually wipe whatever they hit it’s usually better for them to have the pistol and chainsword for the extra attack.  The very best special rule they have is Rage, which gives them 2 attacks on the charge, bringing the total attacks on the charge to 5 each if equipped with a pistol and CCW.  Attach a Chaplain with the squad and you’re re-rolling those attacks.  You don’t want to go crazy on loading these guys out since a small squad will usually clean up units pretty handily. I would personally run a couple minimum sized squads with a power first and a power weapon and call it a day.  If you REALLY want to annoy Tau players you can run a full sized squad with a couple power fists and jump packs and put in a Chaplain with the Angels Wing, which gives you deep strike accuracy and also makes units’ intercept with snap shots. 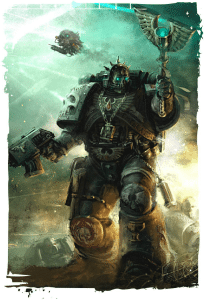 Sigh.  Just sighs all day, son.  Lemartes was moved into the already crowded Elite section for the Blood Angels for reasons unknown. I assume that it is because the HQ section was already so dense and they had to change up how Lemartes was taken in the modern codex format.  He used to just be an upgrade to a Death Company squad that would buff the unit.  Unfortunately, Lamartes just costs too many points for what he does, and he takes up one of the important Elite choices.  He doesn’t even allow the Death Company to re-roll their wounds like he used to.  It’s a shame since Lamartes has one of the coolest looking models in the entire 40k model range.   I really don’t think you’ll see this guy outside of a friendly game at your friend’s parent’s house. 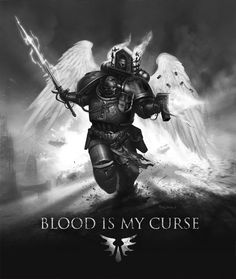 This is a hard one for me to review because I always feel like I’m the only BA player that doesn’t like these guys.  As with the Death Company, they boast the same stat line as a basic Tactical Marine, but with an additional attack.  The come with nifty 2+ armor and Furious Charge, which gives them S5 master-crafted power swords on the charge.  They can get upgrades like power fists for dirt cheap as well.  They are highly mobile due to their jump packs but don’t come stock with Feel No Pain like the Death Company do so they will need to have a Sanguinary Priest attached if you plan on increasing their survivability.  My issue with them is that they cost a lot of points, almost as much as a Terminator, but have no invulnerable save to show for their price tag.   With one wound and T4, it’s really common to see these 175-200 point units evaporate from massed S5+ shooting attacks.  I just can’t justify their point cost for what they do and for that I have to give them them a tactical Terminator thumbs down. If you can make a good case for them and want to put me in my place, let me know what is working for you and your load-outs in the comments section. I really do want these guys to work. 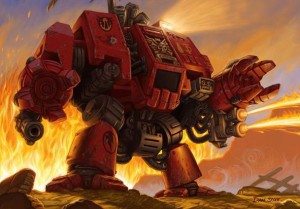 The Blood Angel’s stock Dreadnought is nothing to write home about.  For a laugh you should take one with a multi-melta and power fist with a Storm Bolter on foot just to see your opponent’s face.  The Blood Angel Dreadnought has one less attack than their more handsome Space Marine cousins’ version so it has that going for it, which is nice.  I’m really trying to write at least a paragraph for this unit but it’s becoming a struggle. It’s a unit that’s just not very good even in the Space Marines codex and it’s even worse in the Blood Angel codex.  There is almost no reason to take this unit unless you only have a single regular Dreadnought in your collection and need 100 points to make a 500 point list.

So there we have it, another Blood Angels, Hot of Not? is a wrap.  I really do think the strength of the codex is in the elites section and with a couple of exceptions here and there they are for the most part solid choices.  Join me next week for part 2 of the Blood Angels, Hot or Not? elites.

How do you run the elites in this list?  Let us know your secrets to running Blood Angels in the comments below.

11 Responses to “Blood Angels, Hot or Not? Elites Part 1”