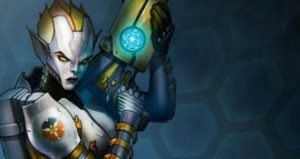 If you’re playing in an Infinity tournament then odds are good that you will end up facing the Tohaa at some point. Some people like to call them “broken”, but while they ARE powerful, it’s the fact that they operate very differently from every other army in the game. Grab your apron and come on in – We’re roasting artichokes! As always, for more articles like this visit the Tactics Corner.

Three things make Tohaa extremely dangerous and you should be aware of how each works:

Fireteam: Tohaa (FT): FT allows the Tohaa to form an unlimited number of Fireteams with the only restriction being that the fire teams can have no more than 3 members. What’s more, is that unlike other armies, these link teams can be made with any combination of units as long as they all have the rule “Fireteam: Tohaa”. What three units make up one of these teams is the secret sauce of the ‘Fighting Artichokes’

Symbiont Armor: Units with this rule have two profiles, the first profile is used until the number of wounds are expended – destroying the symbiont. From then on the second, weaker, profile is used. This effectively makes many Tohaa units 2 or more wounds… something unusual for every other army in the game. While the second profile is often unimpressive, in Infinity everything is dangerous and I would rather take a sucky profile over a dead one any day of the weak. It should be noted that this armor has a weakness against fire- if it fails a single armor roll against a weapon using fire ammunition it goes straight to dead.

Viral: Prior to the Tohaa, Viral was an uncommon ammo type and those packing it were rightly feared. Now the Tohaa can bring Viral sniper rifles, combi rifles, and close combat weapons in a near unlimited quantity. IF you take a hit from a Viral weapon you must pass 3 (THREE!) saves against your Biotechnical Shield (BTS) and if you fail a single one you go straight to the dead state. Get down with the sickness indeed.

So let’s take a look at a couple of the Tohaa’s nastier units that you can expect to see:

In many ways the Makaul is why the Tohaa are so feared. For 13 points you get a model able to form a Tohaa fireteam, has a heavy flame thrower, Zero-V Smoke Grenades, a Viral close combat weapon (CCW), Martial Arts L2, I-Khol L1, and Kinematika L2. That. Is. Bananas. Expect to see multiples of these units spearheading Tohaa link teams. Being able to throw out Zero-V smoke helps the team get to wherever it needs with impunity and the heavy flame thrower can intuitive attack through its own smoke. Should the link be broken, the Makaul is fearsome on its own both in close quarters shooting and in close combat. Pity the player who has to deal with several of these in close combat. 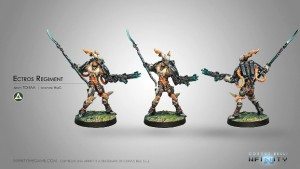 Whereas the Makaul looks to avoid a direct firefight, the Ectros is most at home in one. While it has respectable BS and PH, it has two wound Symbiont Armor – effectively giving it 3 wounds. It lacks a specialist option so expect it to be escorting more fragile units down field. The most popular weapon options are the HMG for longer range fire support, or the Viral combi rifle. It has the Fireteam: Tohaa rule so that HMG is burst 5 and the combi is burst 4. Unsubtle and powerful this is a unit that has the weapons and stats to survive till the end of the game.

A Tohaa player COULD build a list without Keesan… but why would they want to? She is great at scoring points, great at killing stuff. She comes with the Fireteam: Tohaa rule, a K-1 or Viral Combi Rifle, a defensive hacking device (one of only two available army-wide), D-Charges, a flash pulse, a sensor, and regeneration. So she can grab objectives, uncover hidden/camo tokens, threaten heavy armor or light infantry, plant D-charges, and even come back after going unconscious. She is a tad on the expensive side at 33 points, but with the bevy of tools she brings it’s hard to pass her up. 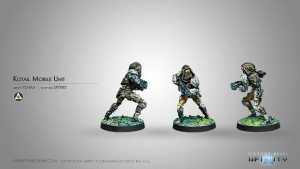 The one unit on this list that isn’t capable of forming a fireteam… but with it’s Holoprojector L2 it can still look like one! With 6-4 movement and super jump the Kotail is fast and flexible. Sure a motor cycle is faster, but the Kotail can jump walls and fit in areas that would force the motorcycle to take a detour. The holoprojector gives it reasonable protection for when it’s exposed. It has a specialist profile for scoring, and two Combi Rifles making it a capable gun-fighter. Did I mention it’s fast? Yeah it’s stupid fast. In an army that typically advances under the cover of smoke and heavy flamethrowers the Kotail is a speedy surprise to the unwary opponent. 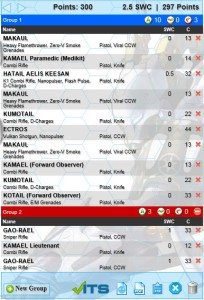 Here is a pretty typical list for Tohaa, it has 3 Fireteams, each with its own Makaul, 6 specialists (two of which are doctor+engineer), Options for threatening heavy infantry, light infantry, scoring points, and can move quickly, or slowly under Zero-V smoke, long range weapons, short range weapons, heavy flamers (In Infinity Artichokes roast YOU!), Multispectral Visor L2… there isn’t much this list can’t do.

The best/worst part is that you don’t have to define the link teams in a list. By simply reconfiguring the Fireteams you can take a squad of Makuals on an assassination run. Form a full Fireteam of specialists, give Keesan two Makauls for extra protection… the list goes on making this very flexible and very dangerous.

Ok, so how do you deal with a list that seems to have it all?

Basically, Tohaa have trouble taking their own medicine. They bring tons of fire, but their symbiont armor is weak against fire… To be fair the Tohaa aren’t much weaker against fire than anyone else, but it tends to scare them more than others so flame on! They bring lots of smoke, but only have two options for visors. And while they bring potent weapons they are generally fragile with low armor. Flamethrowers, Rocket Launchers, and Fire ammo will give the Tohaa player pause.

Tohaa also have generally poor to non-existent hacking. While it is easy to dominate them in that arena, you will find there is actually very little offensive hacking opportunities.

While Tohaa Fireteams are powerful they are ultimately fragile and easy to break. The mistake people make is trying to kill the Makual, with its ability to Smoke Dodge coupled with a better than average PH, the Makual has little trouble throwing smoke and ruining your opportunity.  What you want to do is hunt the soft specialists the Makuals are protecting. It will break the link and take the Tohaa player time and orders to try and reform it. This is one of the Tohaa’s primary strengths- their order efficiency, take that away from them and they will have a much harder moving around the board and scoring points. The downside to this is that you will have an angry Makual running at you next turn- but at least you are keeping them from scoring points.

Tohaa are a lot like the school bully, everyone is afraid of them and if you let them they will pummel you to the ground and take all your ITS points. But if you are willing to go head-to head with them and hit them hard you will find they go down just like any other army. Do not let these leaf-headed weirdos intimidate you! Kill their specialists, break their links, burn their symbionts…and lightly salt and pair with a cream sauce before serving.

Do you play Tohaa or have any good tips for taking them down? Drop a comment below! And remember Frontline Gaming sells Infinity product at up to 25% off every day!

Posted on February 24, 2016 by Casey Roberts in Infinity