Do you hate camouflage? Men in skirts? Werewolves? Well Ariadna might just be your favorite army to crush. For more articles like this, tips, and tactics, head on over to the Tactics Corner!

As the “low tech” faction, Ariadna armies will have a bit of trouble with hacking types of objectives, however they are capable, and typically do, bring swarms of troops, loads of camouflage tokens, and cheap specialists. If you’re not prepared this army can wash right over you and will have no problem completing objectives in ITS missions.

Ariadna has a lot of interesting choices that can bring the pain in a lot of unique ways. Narrowing it down was difficult but necessary, otherwise I could have had a list with close to a dozen options, in addition to the ones listed below. A special shout-out goes to the: Hardcases, Mirage 5, Uxia McNiell, and the Kazak Spetsnaz- Each of these are formidable units by themselves. 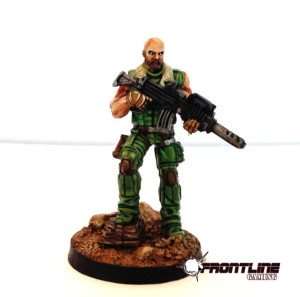 Roger Van Zant: For his points he brings a decent set of weapons and stats but is generally unassuming except for one thing: AD: Tactical Jump. He is the only model in the game with this rule, and you better sit up and pay attention to what it does. This is the only level of Airborne Deployment (AD) that lets you arrive INSIDE the boundaries of your opponent’s deployment zone. Expect this model to come on early in the game when your opponent has a lot of orders and is looking to take advantage of normally unprotected regions of the board. The AP rifle helps him take on larger targets, but really this model is looking to target light infantry-order generating models casually hidden in what should normally be the safest spot of the board. 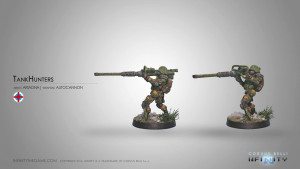 Tankhunter: For years the Portable Autocannon Tankhunter model has been one of Corvus Belli’s bestselling models- and it ain’t because it’s pretty (because it isn’t). Take note other game companies rules REALLY DO sell models! And what a set of rules this model packs! Camouflage, V:Courage, WIP14, ARM3, AP+EXP, and anti-material. This makes the Tankhunter either a great Lieutenant (taking advantage of its good WIP and durability), or as a heavy infantry/TAG killer (using the Autocannon). Unlike a lot of other camouflaged units in Ariadna this one will be hanging back in the deployment zone, probably on a rooftop, looking to take advantage of its weapon’s long range + plus the bonus it will get for Surprise Shot.

Dog-Warriors: Big nasty dog… things come in several flavors for Ariadna. The Dog-Warrior is particularly nasty since it starts the game as a human sized model meaning it can hide out of line of sight better than the versions that start the game already hulked out. They also have the advantage of a pseudo-extra wound: If the model takes a single, unsaved wound (like the kind it would receive from an ARO) it immediately goes into beast mode like the original wound never happened. Irregular, Extremely Impetuous models can be difficult to control, but this one comes with 6-4 movement, Super Jump, and Smoke Grenades meaning that with a practiced hand guiding it, the Dog-Warrior can zip up the board fast in relative safety. Two Chain rifles, CC21, and a AP CCW means that when it gets to where it’s going it can deliver a truck-load of pain in any form it wishes. 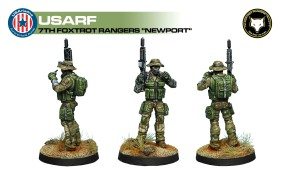 Foxtrot Ranger: Unlike a lot of others in this list, the Foxtrot Ranger isn’t a killer, it’s a game winner. He has Camouflage, Infiltration, Forward Observer, and is dirt cheap. The Foxtrot also comes with anti-personnel mines giving him decent protection and the ability to disrupt enemy movement. While it is possible to give him a sniper rifle or a shotgun, the basic rifle/Forward observer is what you will see nearly all the time. If there is an auto-include in the Ariadna army this is it. 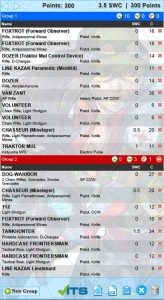 … That is a lot of orders. This list has 18 total orders (19 if you count the lone Impetuous) 7 infiltrating units- 3 of them specialists, 12 camo tokens – 11 of them infiltrating, loads of mines, ways to deal with high armor threats, templates, smoke grenades, artillery, and the ability to reach into the opponent’s backfield. With the exception of hacking there isn’t much this list can’t do. Ariadna has a lot of units that share similar roles, so while it other lists may not be exactly like this it will certainly be similar in terms of size and capabilities.

Let’s break out the spray bottle and go over how we teach these cross-dressing puppies a lesson:

First off let’s talk about deployment. When facing Ariadna you need to assume you will be seeing some form of unit entering in from the flanks. The good news is that these units typically have one purpose: killing stuff. Make sure you have your models placed such that they are looking to the sides, not just forward. Now you should be doing this anyway, only now you have to do it in your deployment zone as well.

Next, we need to fight fire with fire-or more accurately fight Camouflage with fire. Flamers, chain rifles, or other Direct Template weapons can be used to perform Intuitive Attacks on Camouflage tokens (Rulebook page 58) without having to discover them first. Most armies have some sort of access to cheap direct template weapons and should they be considered for more than just a source of cheap orders.

Finally, Ariadna players will be using a lot of camo and smoke grenades to move around. Multispectral Visors (MSV) strips them of these advantages. There are few things better in life than watching someone try to Smoke Dodge when you have MSV:2. The reverse is true as well, smoke grenades will be particularly effective against Ariadna considering they only have MSV:1 visors available to them, so considering bringing smoke or camo of your own.

Are you bringing Ariadna to LVO? Do you have any particular tactics for taking Ariadna down? And remember, Frontline Gaming sells Infinity product at up 25% off every day!

Posted on February 1, 2016 by Casey Roberts in Infinity, Tactics