Say what you want about Games Workshop, they make incredible models.  Today I will be reviewing one of my favorite looking models in 40k, the Avatar of Khaine.

Unfortunately despite being an incredible model the remaining manifestations of the Eldar God of War is just mediocre of the battlefield.  That said I have come up with an idea as to how to use him that I think could make a fun and decent list to play because the Avatar is too cool of a model to be the elf on the shelf. 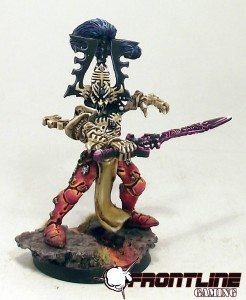 The Avatar of Khaine is so close to being great it’s frustrating.  If he had just 1 or 2 tweaks to his rules he would be a fantastic, but unfortunately 40k is now a game where the elite units feature D-weapons, stomps, speed, and/or great resilience.  In this reality, the Bloody Handed God manifested falls just short. If he was a GMC, he would be an all star. But in this day and age, MCs simply do not cut the mustard. 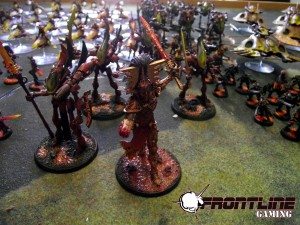 I’m a God, but I’ll Give you a Chance

If you got into a time machine and traveled back in 40k time when there weren’t gargantuan creatures or T5 Wraiths, or all sorts of re-rollable invulnerable saves on the table, the current version of the Avatar of Khaine would be great.  The Avatar is WS/BS 10, S/T 6, 5 W, I 10, 5 A, LD 10, with a 3+/5++ save, Monstrous Creature for the price of 195pts. So what’s the problem?  Mainly he has to walk across the table 6″ at a time all by himself.  In the current rendition of 40k there is a lot of high strength, high volume shooting that will ignore his save and take him down before he gets to fight, and that’s before you have to worry about a 6 from a D-weapon or a stomp and before you have to figure out how to cut through 3++ invulnerable saves and reanimation protocols. It’s hard to make an almost 200 point model work when most armies can kill him on the turn they decide to try to. 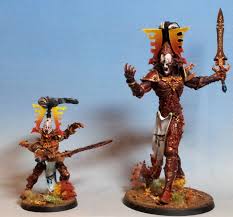 Wailing Doom:  You see that rad looking sword the Avatar is carrying?  It’s not just for show.  This sword can be used to shoot a 12″ S8, AP 1 Melta shot, or can be used in close combat where it is S+2, AP 1 Armourbane.   That means the Avatar has a base of 5 WS10, AP1 S8 attacks at initiative 10.   That gives him a decent chance to cut through a knight on the charge but if you don’t get him that knight will mess you up with his own D weapon attacks and stomps. 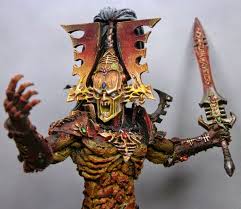 To make the Avatar work in my opinion you have to design a list that helps make him more mobile and takes advantage of his aura special rules.  Thus, if you are going to run the Avatar, I think you should take him as a Living Legend auxiliary choice as part of the Eldar War Host.  With the command benefit, Matchless Agility, your Avatar will always run 6″ meaning he is fast enough on foot to potentially have a turn 2 charge.

For your core detachment I think either the Guardian Stormhost or the Guardian Battlehost is a solid choice.  In either core formation the Guardians will benefit from the Avatar making them fearless and you can buff up their resiliency with psychic powers from your farseer or warlocks. Parking some nice large fearless blobs in the middle of the table can give you some nice board control.  With rage and furious charge, Storm Guardian squads of 20 would have an Ork level of attacks on the charge and  even Guardian Defenders will be rolling buckets of dice.

I would also take an Aspect Host as an Auxiliary formation  with 3 units of Howling Banshees.  With their extra distance on their run and charge, the WS 5 Banshees (due to the Aspect Host) should be ready for a turn 2 assault and the Avatar is fast enough to keep close enough to give them rage and furious charge.  30 fearless Howling Banshees with +1 strength and +2 attacks on the charge at WS 5 will hurt a lot of targets and be right in your opponents face taking pressure off your other units. Plus, you have the satisfactoin of using Howling Banshees!

Even after paying for the Aspect Host, the Avatar, and the Core detachment, you should still have enough points to add some more  units into your list.  I think a list like that would be a blast to play, but it isn’t really a top tier army because you will  lose a lot of punch if the Avatar goes down. And hey, you can always throw in a Wraithknight, too!

In all, the Avatar is a near miss. He can be great, but will more often than not die before ever making it in to combat. Without some serious psychic buffs or luck, he is just too easy to kill.

I hope you enjoyed this article for more reviews and tactics articles make sure to check out Frontline Gaming’s Tactics Corner and remember, Games Workshop sells Games Workshop product at up to 25% off, every day!

17 Responses to “Eldar Review: Lord of War: Avatar of Khaine”