Hopefully you all tuned in and watched the hard fought battle between the Astra Militarum and Tau. Here are the post game thought’s from our two players.

Hello again Frontline Gaming!  DirtyDeeds here with another post-game report for your viewing pleasure.  This week I played Reece’s Imperi- I mean Astra Militarum (I’d rather have a mouthful ) and their new Tank formations.  His list was fun, thematic, and had some surprising elements; my list was not…

Quick breakdown, he had lots of AV 14 and AV 12 in his list with a wide range of weapons to cover every potential enemy army.  As a Tau player, we DREAD AV 14 as our only effective ways of tackling this mighty armor is through Deepstriking Crisis suits, a Stormsurge with several Markerlights, or HULK SMASH.  My list utilized the Stormsurge and relied on the use of two Nova Charged Heavy Burst Cannon Riptides that were shooting twice thanks to the Riptide Wing formation to bring these “mighty” giants down.  I had two decisions on my first turn, either A) RIPTIDE HAILFIREOFWTFDEATH and hope for all the Rends, or B) rush his gunline to see how many licks it would take to get to the center of his Tootsie Pop.  Being a typical Tau player, I chose the former.  However, my poor Riptides did more damage to themselves than they did to Reece on my first turn!! WTF!!!!!  Even his AV 12 escaped the wrath of my Heavy Burst Cannon.  I managed to meek out First Blood by using 5 Markerlights to Ignore Cover, boost to BS 5, and shoot two D missiles at Chimera…

Yeah, that’s how I felt about that too.

Anyways, I shrugged off the worst shooting phase ever in the history of Tau and defaulted to my next game plan; HULK SMASH.  All my Riptides rushed different sections of his Tank line to prevent him from gaining any ground, one took the left flank protecting my warlord, the weakened Riptide rush up the center to attract fire, and the last escorted my Stormsurge up the right flank to work on those pesky Guardses trying to get Line Breaker.  Stupid Guardses, this deployment zone is my precious!

So fast forward quite a bit, the Stormsurge ALMOST died in a hail of Plasma and Melta shots (he survived with a single wound remaining! Yikes!), Firewarriors came on and shot things, Kroot came on a Glanced a tank to Death, Stormsurge did a little tango and rolled two 6’s on Guard…  It was fun.  We didn’t tally the points in the end because it was a one sided game from the start (we rolled the Kill Point primary ITC mission), but we still had some fun.  One unit that I would like to expound upon before I sign off is the Forgeworld Y’Vahra.  I highly recommend that all of you take a quick look at his rules now that ITC permits experimental rules in their tournaments as you’ll start seeing this bad boy.  His sports a 6” Torrent Flamer that could potentially be Str 6 AP 2 Heavy 2, and a Str 8 AP 3 gun that does the Str 8 and a Haywire “hit” per successful hit (and it causes Blind too).  To top him off, he can move like a Swooping Monstrous Creature every other turn, has Hit and Run, and one of his Nova Charge abilities allows him to jump into Ongoing Reserve even if he’s stuck in combat.  This model will murder Invisible units without Invulnerable saves and will steal their candy while he’s at it.  The Y’Vahra is a dangerous model that is incredibly aggressive and agile for the typical Tau M.O.  He still was my MVP this game despite how poorly I played him.

Things I wish I would have done differently… Well I think I should have been less afraid of Tank Shock.  Heavy Tanks can’t move very far and I could have used that to my advantage to set up turn 2 assaults.  Also, I focused too much of my Y’Vahra’s attention on the Engineseer, he should have worried about taking out tanks with Haywire.  The game was still fun and I’m glad I had the opportunity to head into the studio.  Expect to see more of me in the future!

Alright guys, thanks for watching and reading!  This is DirtyDeeds, done dirt cheap! 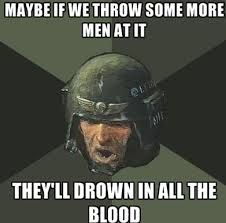 I knew going in that I was likely to lose the game. Keith’s list is solid, Tau MCs are brutal and Marker Lights rock the house. Leman Russes….don’t! Lol.

I thought I might have a chance on the mission with some clever play and some luck, but we rolled Kill Points. Le sigh. Considering how difficult it is to kill MCs vs. how easy it is to kill Tanks I was pretty hosed baring some really good fortune.

As it went, I was actually winning Maelstrom but Keith had First Blood and killed all of my units that were able to take out the Y’Varha which is so bleedin fast, there was no way I could keep it out of my deployment zone. With that combo, and no way to get Slay the Warlord, I was SOL.

Oh well, it was fun to get ye old tanks on the table and to try out the Cadian Battle Group! It’s a fun detachment, but not one for competitive play, at least not the way I played it.

I hate how Tau can do Monstrous Creatures Better than Tyranids now. Oh, and add a master of ordinance to your company commands. I know the scatter can make them hit or miss but having that pocket large blast when you’re behind the 8 ball can make all the difference.

Yeah, Tyranids struggle in a big way right now. Relying on slow MCs that also need a cover save to function simply doesn’t work in the current meta.

The French Overlord had a Y’Vahra when I played him at TSHFT,and I was very impressed by it. Really cool Unit that brings a lot of handy tools, even if it can be kind of awkward at times to find a target that isn’t wasting some of its firepower.

Yeah, it is an exceptional unit.

I find the thing to be too good. It has a guy for every occasion, it’s save gets better when you get close to it and it has really good mobility. You try to take it out with deepstrikers and it probably has interceptor with that flamer and your toast unless you have a really good invuln.

“Too good for its points” is a good summary of anything worthwhile in competitive play. As a good competitive unit you have to learn how to deal with it; generally you either want to out range it with weapons that hurt it (obvious example being grav) or assault it.

My experience is entirely “friendly” play. I’ve seen it used on a guy with only foot CSM and helbrutes. Sad sight.
Haven’t seen it since the update came out and it can’t be in the new decurion . Coordinated fire at max power is stronger.

Yeah, something like the Y’Varha can be disruptive to casual play as it is so overpowering.

It hits fairly hard, but it’s significantly more fragile than the Riptide is and more vulnerable to assaults as well, since its guns are so short-ranged. Unless you’re bringing a very aggressive Tau list, it typically will wipe out one unit and then die or, alternately, skulk around the edges of a fight trying to pick off stragglers.

It certainly can. It bugs me that Leman Russes are so bad when they should be quite good. Main Battle Tanks shouldn’t be so laughably easy to destroy, lol

Heavy should grant essentially mini super heavy status so you can only be effected by an explodes and then only d3 hull points. Would help them a bit. Suppose what would really help would be a -1 to pen but then you’d have to give that to super heavies.

Eh. Even then, Russes would get wasted by Haywire all the time. The Optimized Stealth Cadre eats them for lunch, too, since they can always get at the squishy back armour.

As someone with an old 3rd ed Tau army, I’d love for my Hammerheads and devilfishes to be better. I mean back in the day, a st10 shot on a tank that could move and shoot meant something. Now, one shot, whoop de do vs 8 wound monstrous creatures..on a tank…that can’t move all that fast if it acutually wants to shoot.

Tanks in 40k should be like the relic sicarian tank, mobile and full of dakka dakka.

How exactly is the ITC ruling Y’vahra? Do you hit it on 6’s or is it just the standard movement it benefits from with regards to its ‘swoop’?

It comes out of “Swooping” at the end of the movement phase, so by the time it is getting shot at, it is a normal Riptide again.

For 230 pts, it’s a bit on the soft. I mean no invulnerable save, 8-12 inch weapons and only 4 wounds! It’s like a warp spiders wet dream. Sh*t you could just shriek this guy and he’s dead.

It has an invul save. It’s a beast of a model.

it has an invuln, but 5++ won’t hold up for long against Bladestorm/Monofilament, Grav, S6+ spam, and all of the other things you see. The Y’vahra is pretty good at smashing vehicles and flaming out isolated infantry, but it will die easily to concentrated firepower and is significantly more expensive than the Riptide.

Abusepuppy, his invul increases to a 4++ if the attack originates within 12″. Now while the shooting you mentioned would bring it down, it’s the sacrifice you have to make to take such a mobile mobel. I feel that his clutch jump moves and incredible firepower brings an effective tool against Knights, Deathstars with tanks, and vehicles in general.