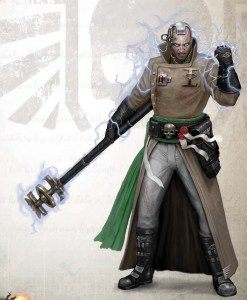 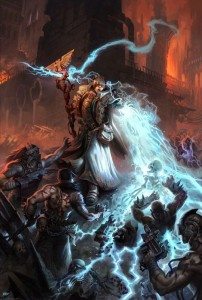 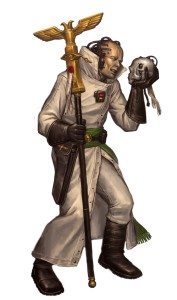 What do you think of trying to create a daemon-summoning list? The chances of casting the WC3 daemonology powers are pretty solid when you harness on a 2: 87% on 4 dice (and 72% chance of perils, so the Commissar is going to get trigger-happy). If you took 2 Psykana Divisions, you’d have 16 dice per phase from them, plus whatever you can squeeze out of a third detachment (I don’t think you can realistically run 3 Psykana Divisions)

Wyrdvane Psykers aren’t on that list. Its pretty obvious that GW intended for the Commissars taken in this formation to be able to join the Wyrdvane units, but as written, I don’t think they can. Perhaps a FAQ entry is needed?

They could certainly summon craploads of daemons but I’d be a bit worried about that look over the shoulder rule. Also if using artillery with the psykanas can templates be placed over the daemons? That is would they count as enemy or friendly models for that purpose?

The detachment gives permission for the Commissars to join the Wyrdvane Psykers.

And yes, Daemon Summoning is a solid tactic for them, no doubt.

I like that it enables summoning to a limited degree, but without making it crazy (since it’s still based on making use of a fragile infantry unit on foot.)

Yeah, I think this is an excellent formation.

i think this formation coupled with drop pods ( probably space wolves for me) and some assassins would be pretty dang fun! Just gotta be careful where to drop the Culexus to nullify enemy warp charges.

Or use them to juice his gun up to max, haha!

Oh yeah, I didn’t think of that!

Frankly, the only problem I see with this formation is that the GW Wyrdvane Psyker Models totally suck. I’m definitely gonna roll a Rogue Inquisitor Daemon Summoning list with this at some point.

I just use my CCW cultists with pistol for them. Could glue some bits on and call it a conversion if needed.

Yeah, in the past I’ve used my culties who didn’t have any noticeable specifically chaos bling. The ones converted from old Necromunda gangers and such.

I actually really like the Wyrdvane models, personally, haha.

The poses just look so awkward to me. The fact that there are only three of them is also a downside.

I was very excited for this formation because I love Primaris Psykers, but quickly realized as you said that they are more of a battery. Which is fine.

My friend really wanted to try his 5 wraith knights in a unbound list recently. Gave this a go.

5x Psykana Division (1 commissar each) = 1525 points (let my opponent take another one of those 30 point gun upgrade things).

I luckily rolled to go first. Moved up then used my 5 2+ wyrdvanes to summon 5 units of pink horrors (4 dice per cast). I tried to place them with minimal scatter for ONE EYE OPEN and luckily none scattered back more than a few inches towards me and even better one scattered towards the WK. I then used the Pink horrors to cast 3 more pink horrors (7,7,6 dice per cast since they don’t generate any charge yet) and used the Banners they have to precision place them. Ran everything and formed a good bubblewrap/barrier. I’m at 48 warp charges now. I warn my friend that he should try to stay in combat because I will begin the psychic Shriek spam from my Primaris Psykers (some have invis too of course). He conceded before moving which was too bad because I wanted to bring in 3 keeper of secrets next turn too 🙂

You actually cheated a bit, since conjured units cannot themselves attempt to manifest a conjuration the turn they arrive. But the fundamental strategy of calling up endless waves of daemons to tie down Wraithknights is very solid.

Main issue I see is with their t3 and low saves, I can’t see these surviving long. Summoning and buffing from a transport looks like best option to me but then its.more pts.

You cannot cast blessings or conjurations while embarked on a transport, only witchfires (assuming it has fire points.)

Although adding to my last comment blobs with good summoning would give so many bodies for the enemy to cope with. Board control masters

Exactly. I think if you hide them and use them to just pump out Daemons they would be really good, actually.

According to the Astral Militarum Codex you cannot roll on the Daemon Table for psyker Powers. The Codex states under the Wyrdvane Psykers they can only roll on Biomancy, Divination, Pyromancy, and Telekinesis.

Have been reading this and am trying to find out how everyone is getting access to the Daemon table.

The AM Dex came out at the very end of 6th, before the Daemonology Disciplines even existed. When 7th came out, they were retroactively added to all the Dexes except for Nids.

Check out the Malefic Toolbox articles. They give a pretty good primer on that.

What do people use to keep these guys alive? Hide behind vehicles? Fortifications?