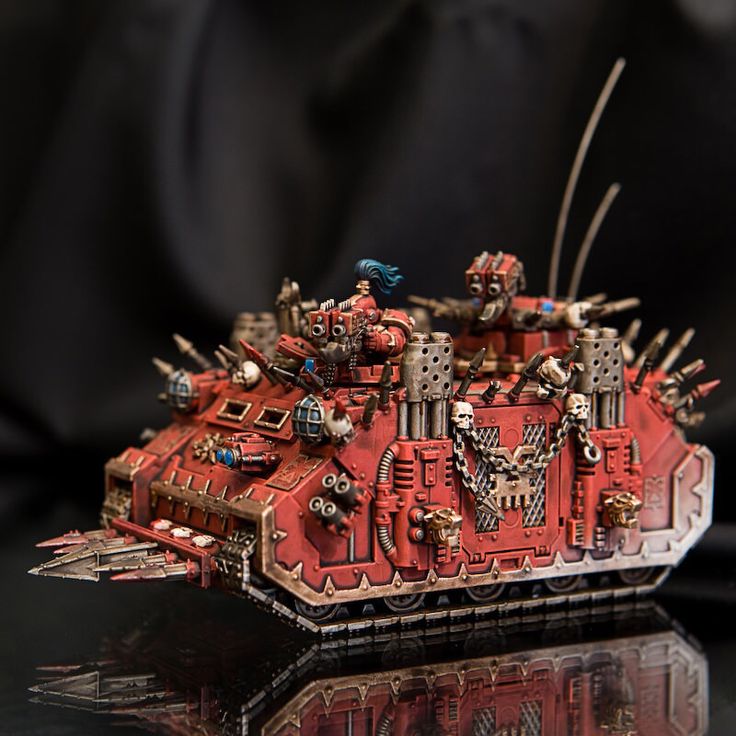 In this article, Loopy extols the virtues of the ubiquitous Rhino as they pertain to the Khorne Daemonkin. Check the Tactics Corner for more great articles!

The Rhino hasn’t seen as much action as it once did for various reasons. Rhinos are not assault vehicles and they’re fairly lightly armored (11/11/10). They can be a sure fire way of providing your opponent with the First Blood point in missions which use it and also provide easy kill points in Purge the Alien. Some armies have given up on concerning themselves both of these issues, including Sisters of Battle and, to some extent, Khorne Daemonkin. With the rise of progressive scoring, and free transports the Rhino has even seen a resurgence in other armies as well. 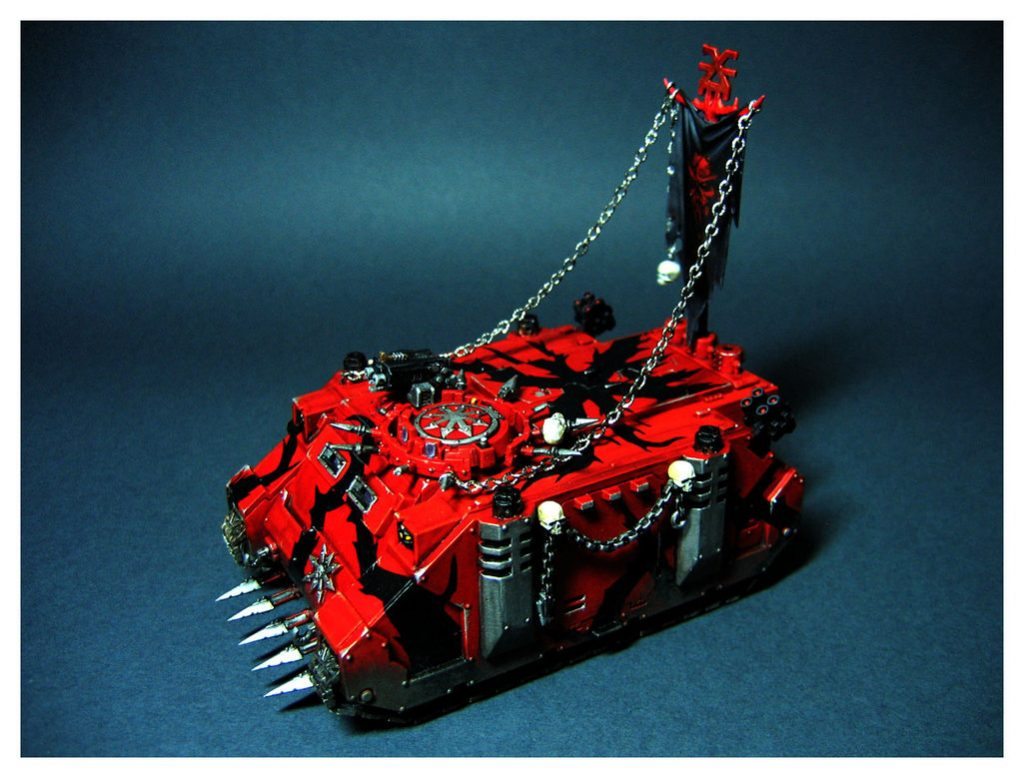 In an environment where progressive scoring is rampant, the Rhino cannot be dismissed. It can be an incredible tool when drawn from the Fast Attack slot to give mobility to Chaos Cultists or even Bloodletters. Since all measurement from a unit embarked on a transport is from the hull, you’re allowed to decide whether  the Rhino itself or the Objective Secured unit inside is scoring an Objective since they are technically equidistant. This can be very frustrating for your opponents since they are often loathe to destroy your Rhinos. It’s annoying to have to target something with little to no offensive value, particularly if it has a cover save.

If you’re using Chaos Space Marines or Berzerkers in your lists, then a Rhino Dedicated Transport is almost a given. The only way those units can compete with Bloodletters from a scoring perspective is to be carried about the battlefield in a Rhino. If you’re using the Blood Host Detachment, and therefore a unit of Possessed, consider buying them a Rhino as a Dedicated Transport. Granted, some may argue that this is just conflating the problem of an expensive tax unit. I disagree. If you have a unit you consider to be a tax, it’s important not to think of it as an empty hole in your list. Do not simply lament their very existence and hide them somewhere or charge them up the field uselessly. Use them! When life gives you lemons, blood for the Blood God! 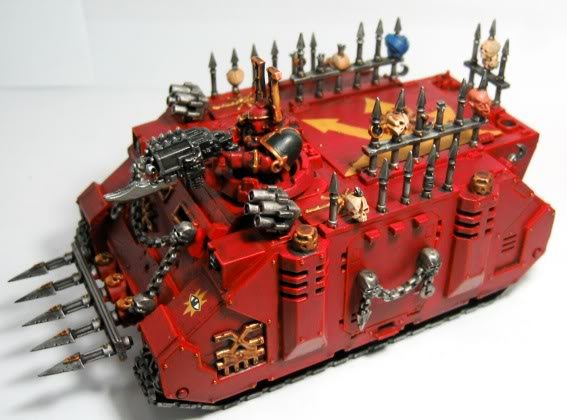 In KDK, the Rhino can present your opponent a unique decision. Do they destroy your Rhinos, thus impairing your units’ maneuverability and durability or do they leave them alone in order to slow your Blood Tithe generation? In most cases, the former is the right choice, but not all opponents will see that.  Meanwhile, although you’ve given up some kill points, at least you’re well on your way to executing whatever late-game gambit you had in mind whether that be an impressive assault or a Bloodthirster.

The Rhino does have many options which are almost universally useless to any Khorne Daemonkin player. You can festoon these transports with all manner of trinkets which do little more than increase the points cost of a vehicle which was essentially born to die anyways. I might consider adding a Dozer Blade simply as a way to assure your scoring units make it into position. One glaring omission in the Khorne Daemonkin vehicle upgrade list is the Dirge Caster. Granted, this upgrade is more of Slaaneshi origin, but it would have been quite useful to the KDK in negating powerful Tau overwatch. If you want a Dirge Caster in a pure Daemonkin list, you’ll have to check out some Forge World options. 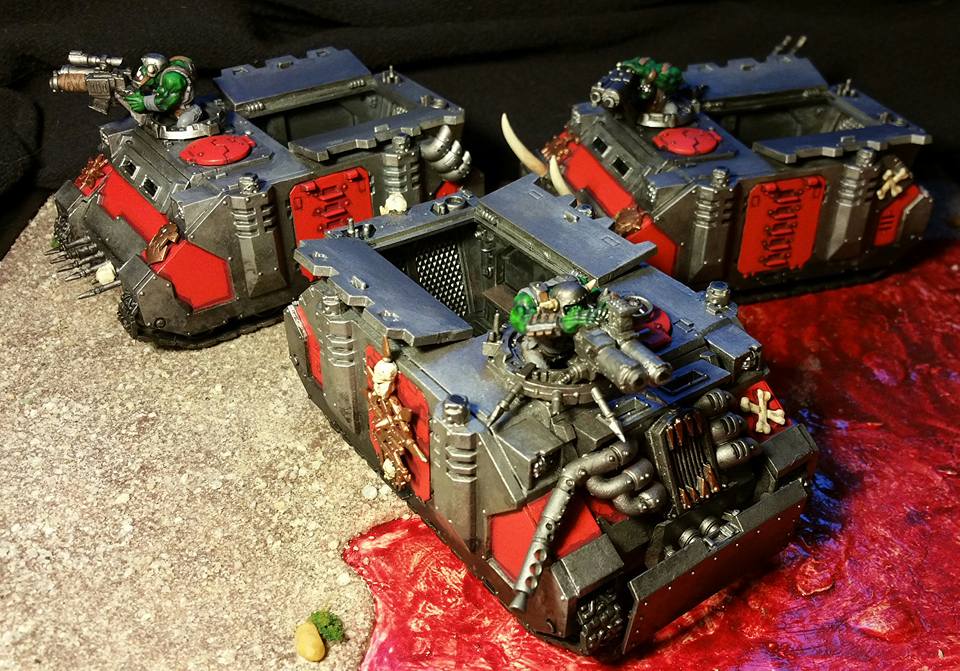 With deadly threat rolling up the battlefield, it can be tough for your opponents to make the choice to shoot at your Rhinos. Push them forward into scoring position, bravely charge through terrain, and even Tank Shock here and there. You never know when you might get to see a squad of Windrider Jetbikes run screaming off the battlefield. Rhinos have great purpose in a Khorne Daemonkin list. Give them a try.

My tournament lisr uses 2. They are great, and help a ton against knights, as they give an obj sec unit an extra layer of protection when holding an objective.

Yeah, I was thinking about putting 2 into my tournament list as well.

I have been having an issue with dealing with flyers as of late, how do you deal with them Horton?

I run an msu flesh hound build, and I have found that if you have tons of small fast moving assault units you can win the ground battle so hard that flyers do not matter. In general, the more flyers my opponent has the more likely I feel I will win.

Same here. The only time I actually had trouble because of flyers with my DK was when I actually diverted Units to try to deal with them instead of just focussing on the ground game.

If only ITC would do the same…

>If you have a unit you consider to be a tax, it’s important not to think of it as an empty hole in your list.

There’s certainly some value to this line of thought- at times spending a few points to bring a unit from worthless to passable is a good plan- but it’s also very easy for this to turn into a sunk costs fallacy; “My unit is bad and overpriced, so I need to spend more points on them to make them good.”

I would look at it less from a “you’ve got to make your Possessed not be useless” angle and more of a simple “Rhinos are good” one. 35pts for a reasonably-sturdy transport is a solid deal, so when you have the opportunity to buy one you typically do.

One thing you didn’t bring up that I think is actually pretty reasonable are the Combi-Bolter/Combi-Weapon options. In both CSM and KDK I find that the ability to slap a Meltagun onto your transports can be a nasty surprise for a lot of players. Though they are, as you say, “destined to die” I also find that they are not a priority target once their contents are disembarked, so an empty Rhino cruising around will often not get shot a lot. And sniping a Knight or warlord with it can be a wonderful feeling.

The ole’ Combi-Melta Rhino trick has gotten me many times, lol.

It’s definitely a “gotcha” unit, and for the relatively small price increase I feel like it’s a good buy. Having two Bolters to shoot a things is surprisingly useful, too.

I’ve gotten so many clutch kills with combi-meltas on rhinos. It’s a not insignificant number of points, but it pays off often enough and asymmetrically enough that I think it’s worth it.

Yeah, agreed. It is surprisingly good.

I’ll give it a try. I usually find myself moving 12″ or 18″ in a turn with my Rhinos, but if so many people are extolling its virtues, I guess it bears trying.