Hey everyone, Reecius here with another article in our coverage on the Cadian Battle Group. This time up for review: Ogryn Auxilla. Check the Tactics Corner for more great articles.

The Ogryn may lack brains but they more than make up for it with brawn and balls! The Imperium utilizes these tough mutants for brutal close quarters engagements where they can smash the enemy underfoot. 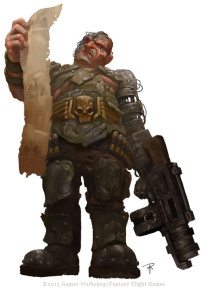 This is a fun formation, but one that like so many others in the Cadian Battle Force, is just too much of a points investment to really get excited about. My recommendation would be to go with the Rampart Detachment, personally, but the Ogryn Auxilla does have some nice benefits if you want to use it which we will cover. Essentially it gives you the option to run some min-maxed Ogryn units if that is something you want to do. 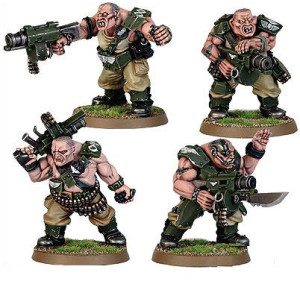 This is a fun formation but not a competitive one. It’s expensive, and the special rules are not compelling enough to justify taking it over simply grabbing a few units of Ogryn in a CAD. However, they can fulfill the Auxiliary requirement in the Cadian Battle Force detachment which is something to consider. I would struggle to justify that choice over the other options available, though.

The special rules of a formation typically are what make them exciting but these are just pretty meh. The improved HoW to Str7 is OK when it works but with big based models it’s tough to get more than 1-2 of them into base to base in an existing combat. Fearless is fantastic, but having to remain within 12″ of a very squishy, single wound Commissar is not a reliable tactic. Again, the Rampart Deatchment from Da Red WAAAGH! is much simpler in that it just gives the Bullgryn Fearless, Fear and Counter-Attack.

If you want to run min/maxed Ogryn or Bullgryn, which I have often toyed with the idea of doing just this with a Priest slapped into the unit to give them Zealot, just do it in a CAD. You have less points you have to invest in it to make it work.

I love Ogryn and sincerely wish they were better, but this Formation doesn’t make them that much more appealing. Negativity aside, if you did want to run it, I would recommend taking a White Scars Librarius Conclave to pair with it, and use some fun psychic buffs with them, plus gaining that incredible Hit and Run, and AtSKNF to boot! That way you can play for some cool psychic buffs to make the units more viable and less prone to running away. 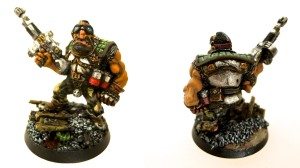 In the end, this is a Formation that will probably not see the table much as most players simply don’t have the models and the rules aren’t exciting enough to motivate getting it put together. Perhaps in an Apoc game (which the entire Cadian Battle Force feels like it was meant to be used in) they would be fielded, but in standard 40k they won’t be getting much play time.

What do you all think about the Ogryn Auxila? And as always, Frontline Gaming sells Games Workshop product at up to 25% off retail, every day!

Thanks for these review Reece, keep up the good work. It really is a shame that the Cadian Battle Group sucks so bad

Happy to do it and yeah, they are mediocre at best =/

I feel like it’s tough to make the ogryns fluffy and still good. So much of the game is movement and toughness. So even if they were given rending/fearless/eternal warrior/ and 4+ fnp, they still wouldn’t go anywhere in a hurry and could be avoided. And imperial guard don’t really have access to a good assault vehicle either.

Bullgryn are actually somewhat okay because of 4+/3+ armor combined with T5 and W3. They’re not _great_, but they at least can soak up a lot of punishment, which is theoretically their main job. Ogryn, who only have 5+ armor, die too easily to massed guns to really be counted as “tough” and have the additional flaw of being mediocre at both shooting and assault.