It’s another day and another article from the one and only Goatboy – today’s topic of review is the Vaul’s Wrath Support Battery.  This is an Eldar unit that cause a lot of ruckus when it was first reviewed and while decent I think the overall lack of availability stunted its use in the every changing landscape of competitive 40k.  But enough of that – lets see how good this movable Artillery is.

We all remember the days of Vibro Cannons and other older Eldar artillery causing all kinds of problems.  I still think I have some old Metal ones laying around somewhere and I still fear the damage potential these guys could throw out.  GW came out with a new plastic version before the codex update so while it was neat to have a decent model it was not so readily available which left a lot of new armies without a model to practice with.  Still they are pretty strong, have access to the dirty D, and seem pretty decent as the Heavy Support slot is not nearly as crowded as some of the other Eldar choices. 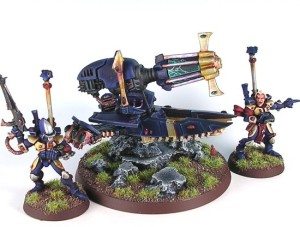 This unit is pretty simple – it is an Eldar artillery option that has a lot of Eldar rules that make it better then the ones your Daddy used to man during the Horus Heresy.  Two of the options have Barrage while the other has a weird Strength plus -Ap bonus if you hit with everything.  Lucky for the Support Battery, all those Guardians got better at shooting so almost every option has purpose.  Each Platform has 2 Guardian friends and the ability to include one Warlock Leader. 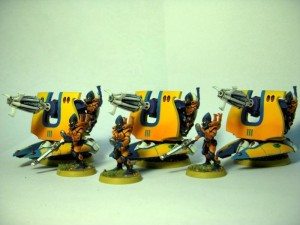 These are the Eldar big guns, that sit in the backfield and rain down destruction on the enemy. They have a wide variety of weapons, but what stand out to most is the access to full strength D in the D-Cannons, which is extremely powerful – especially in a psychic heavy faction like Eldar.

The D-Cannon is a great answer to the Necron Menace as it denies their Reanimation Protocol rolls. Really, it’s a great answer to ANYTHING due to the devastating power of D weapons. It is also great for hunting anything with Feel no Pain as it also denies those rolls. Adding a Warlock to the battery is fun too, as it adds Warp Dice and more psychic buffs. The Primaris power, Conceal, is awesome for this unit, too. Plus with the move of the Wraith Knight to the Lord of War slot you didn’t have to worry about taking up heavy support space.

This is a locked in option for the Guardian Battlehost and Guardian Stormhost. As such, you’ll be seeing them fairly frequently, but often they have a place in a CAD as well.

The guns come stock with the Shadow Weaver which is an excellent weapon due to the 48″ range and Monofilmaent rule. These weapons can cut swathes through light infantry but are still a threat to light and medium vehicles as well as MCs and Heavy Infantry, too. They really are an excellent weapon for the points.

The D-Cannon is the truly scary option! The limiting factor though is the 24″ range. Often what happens with these weapons is that they are used for area denial. Most opponents will really fear the deadly D blasts and stay away form them. So, play them aggressively! If you find yourself with no targets on the first turn, move forward and then Battle Focus them into position. If you are in the Warhost detachment, that is 12″ of movement, turn 1! Move to the center of the table and then dominate mid board. I also like to stick my Farseer in this unit to increase their leadership and to keep him safe from shooting attacks thanks to benefiting from their T7. The psychic buffs help a ton, especially Guide. However, the real killer is Perfect Timing which is just brutal on this unit.

This is the thing with the Eldar Craftworld Codex: there are so many strong options in there.  We also know how amazing Barrage can be to snipe out important “FNP” givers or other USR providing characters in a unit.  Heck, I can just see a ton of Shadow Weaver templates removing those pesky meat shield models, like the Fenresian Wolves in a Wolfstar, that always love to jump in the way of “deadly” firepower.  Or, just lob the D blasts right into the characters in a Deathstar and laugh maniacally when you 6 them out!

Slapping a few D templates on the upcoming scourge known as the Storm Surge will do a number on those piles of 8 wounds, and doesn’t care about FnP, either.  I think the need of a movement combo or some other option does hurt the artillery. The new Corsair book could have a lot of fun moving these guys around, too with their teleporting shenanigans.  If Marines had this as a weapon option it would show up in so many armies – but as its Eldar there are just more efficient options. I kept thinking we would see some of these with a Gate pyschic power set up to go around the table, blast stuff and just cause problems, but that has yet to make table tops in my experience. In all though, this is a great unit for Eldar players, if they decide not to just take more Windriders, lol.

I love the Vaul’s Wrath Support Batteries. They have served me exceptionally well in my games with my new Footdar. The Shadow Weavers are rock solid for such a low price and the D slappers bring the absolute pain.

I think it is only the Guardian Defenders that get relentless for their heavy weapon. Am I missing something?

Nope, you’re right, I missed that bit when I was editing the article.

Yeah I am debating taking 2×2 D cannons and a warp hunter in my eldar/corsairs army. That makes my army more static then I would like, but could be worth a shot?

Strange that the Eldar and Corsair version of the Warp Hunter gun have different rules for their D shot. The Eldar being a -1 on the D table, and the corsair + appendix counting 6s and 5s on the D table?…

Is ITC ruling both to be different or will ITC pick 1 to simplify things? I would imagine the corsair and appendix to be correct, but you never know with GW or Forge World

Vaul’s Wrath Batteries are not the same as support weapons. They are not Relentless.

Good catch, I missed that in editing.

I was wondering what I had missed when I read this post Eldar artillery that could move and shoot. I went back through my codex trying to figure it out. And I came to the same conclusion that abusepuppy pointed out, they can’t. That would be why the eldar armies with gates and support platforms that Goatboy was expecting never materialized. Teleporting a unit of artillery around the table that then couldn’t shoot would be pointless. I wish you could move and shoot with these, it would provide another option to the eldar so you didn’t just see scatter laser bikes, warp spiders and wraithknights.

Yeah, I was wondering the same thing, I missed that he thought they could move and shoot in the Special Rules section.

Yea it would be sick if they were relentless as their range would almost be a non issue, as it is move them into the middle of the board turn one and now there is a 24″ bubble your opponent will fear and they are shooting magnets letting your spiders, scat bikes, and other eldar nastyness do their thing.

The Vibro Cannons just needed something else to give them a good role.

I think Vibro Cannons should have ignores cover to make them worthwhile. That would make sense – you can’t hide from bad vibrations – and give them a unique role. Another idea would be to make them like a smaller version of the Sonic Lance – the squadron shoots a torrent flamer template up to 36″ lets say and wounds on a value based on how many cannons there are in the artillery formation.

You may not be able to hide from bad vibrations, but you can counter them with well-chosen Beach Boys songs 😉

I stick my Farseer in the D-Cannon battery, works great.

If they used their old “draw a line and hit stuff underneath it” rules that could be pretty cool. They’d probably need a weaker profile (or higher cost) to make that work, though.

Yeah if vibro cannons just ignored cover that would be huge, oh well.

If you teleport with Gate of Infinity, does that count as movement in restricting your shooting?

With the Corsair warp blink and tunnel powers I believe you can shoot normally still.

Yes, you would have to snap fire if you teleported.

I’ve looked through the craftworlds codex and I can’t see where it says guardian support weapons are relentless. They were in the previous codex but I can’t see it in the new one. If anyone could point me in the right direction I’d appreciate it. I have the ibooks non interactive version.

Something I’ve not been able to answer with these and I’ve seen them played both ways without a convincing case either way. Currently units can fire heavy weapons normally as long as the model carrying it doesn’t move even if other models move. So with this artillery does that mean the crew members (1 or both) could move and as long as the platform (and 1 crew member per gun?) remained stationary the battery can fire normally?