“The best battle plans can fall apart in front of you and leave you crying for your momma.” – Captain A

So a couple of weeks ago I talked about my plans for the kind of lists that give me problems, biggest one being lots and lots of bodies. At last weekend’s TSHFT I got to put that into practice, three out of four times! Woot.

Jessup had a counter meta list with tons of returning bodies. It was a close game that in hindsight I should have zigged when I zagged on the last turn as we tied on secondary and if we would have tied on primary, I would have won 2-1. It was still a great game and Jessup was a lot of fun to play against. He did well focusing on my obsec units to contest my objective and pulling me off of contesting his in the last moments of the game. Had I focused on clearing and maintaining my objective things might have gone differently. He just had more bodies and more options those last turns.

Another great game, this time against an Imperial Fists Battle Company. I killed a ton of stuff and used both Stars to put a ton of hurt into Wes’ minmaxed squads, but just couldn’t kill enough and we ended up with a tie. Great game and lots of fun. 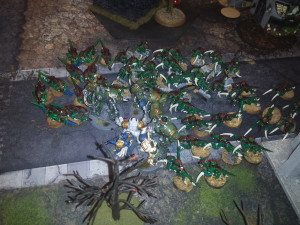 Logan was running a very new army to him and my list was a hard counter to his. It didn’t work out well as a whole for him as I was just able to sit back and kill all his transports and then focus on the guys hoofing it towards me. Great guy and took it in stride.

Igot meme’d! Matt was a great guy that felt really dirty for what he did, and he should! It was hilarious as we were playing Hammer and Anvil and I null deployed to keep from all the grav and melta coming my way turn one. Bad move. He nailed all his drops and killed off my deployment zone, keeping both stars from coming in. I tried to make a hole it wasn’t to be. At least we made memories that will last a lifetime. I can see it now, 30 years in the future as Matt tells the tale to his grandkids.

I dropped day two and slept (four games in one day is brutal) and worked on my side gig and knew I had to make a change. Another lesson from TSHFT was how many void shields were there. It was nuts. While my list can do some serious work, it is very vulnerable and I know I have to make some changes in order to have a chance. 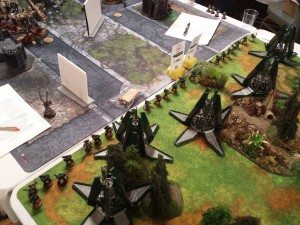 So this list should give me a lot more tools against a more variety of armies. Should have a good chance against Void Shields and larger bodies. The Cleansing Flame power from the purifiers is brutal against clumped things and can really put a hurt on stuff. This should give me a decent way to pop the Rhinos or clear out chunks of guys in the psychic phase so I can then continue to shoot them in the shooting phase and assault later as well.

It feels like it will have some hops against many more lists than before and give me a better chance of placing high and perhaps winning my GK spot. We’ll see.

Yeah VSGs can be very annoying for a lot of armies. They can almost completely shut down armies that rely on almost all Grav and/or don’t take enough AT guns.

I used a VSG for the first time at this Tshft. I knew it would be good, but didn’t realise how good. I am having a hard time writing a list that doesn’t include one now.

I played a drop pod skitarri/Grav cent army. He didn’t have many weapons that could down a VSG except 1 meltagun, a few crack grenades and 3 of the 3 shot skitarri plasma guns. He targeted my Warp Spiders with the plasma skitarri. I went clever mode and flicker jumped the spiders out of the VSG bubble to prevent him from getting and of the plasma shot on my shields. I lost the spiders, but the rest of his army were sitting there with their

Butts in the air. It was pretty much game for him as I got him too hard turn one for him to recover. The VSG saved my ass in that game.

With the prevalence of rhinos and drop pods I don’t get why more people don’t take the haywire options for skitarri and mechanicus.

He has two Squads with Haywire and one with Plasma. It’s actually a decent list if he works out some way to get an answer to VSGs in there. Not great, but decent.

You have no idea how much Matt enjoys this story too! He is mugu’s hero!

I’m glad I could accommodate his hero status!