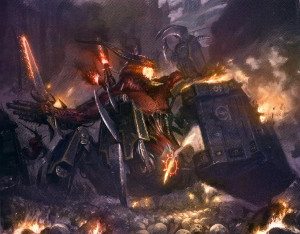 Hey guys, its’ Adam from TheDiceAbide again, here to talk about my favorite army in 40k, the Khorne Daemonkin! Today we’re going to go over a monstrous amalgam of daemon and machine, the dreaded Soul Grinder.

A capable monster in combat, but also brings some devastating fire support, much needed in the KDK army. Due to their flexible equipment, they can be built to serve a variety of roles, though perhaps unsurprisingly, they will always excel in combat. 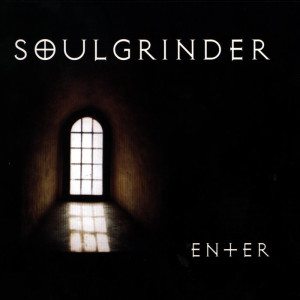 Another of the Heavy Support choices for the Khorne Daemonkin, the Soul Grinder is a heavily armoured behemoth of steel and sinew. Boasting a robust AV 13/13/11 with HP4, the Soul Grinder is the KDK army’s most resilient vehicle, outside of a Land Raider, it’s incredibly difficult to kill, and immune to S6 in melee (so no Krak grenades). Due to their long-ranged weapons, they can be fantastic back-field pieces, or when geared for combat, can run up with the rest of the army as a clean up unit. Overall the Soul Grinder has great utility at a very reasonable cost. They’re cheap enough to spam, especially if you’re playing a Blood Host, where competing for Heavy Support slots isn’t a problem, but I would be careful that taking too many of them doesn’t slow down your army too much. 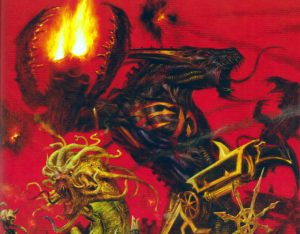 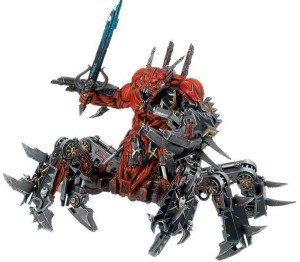 Personally, I’m often times using the Soul Grinder as a back-field objective holder. When armed with a Phlegm Cannon, it can give some much needed fire support, and if anyone is foolish enough to get close, it will deliver a devastating counter charge. With AV13, a 5++, and 4 HP, it takes quite a bit of firepower, which if your enemy is putting that into it, they’re not firing at your faster units that are going to be in combat the next turn. Since it’s so far back, it’s often an after thought for the enemy, and they’ll just continue to accept the ranged pounding that it will deliver.

If you want to be a bit more aggressive, there’s always the Deep Strike option. Being a Daemon of Khorne, you can land it within 6″ of any of your other Khorne Daemon units that are toting banners without scattering, which is a great way to mitigate it’s large size and tendency to mishap. When you play it like this, you don’t even need to give it any upgrades, it will just land and scare the snot out of the enemy, though if you want to cause a bit of extra chaos, the Baleful Torrent will do the trick, and if you think it’ll survive the first turn to get into combat, go for the Warpsword.

As a mid-field support unit, the Soul Grinder also excels. It’s hard to shift, and can deliver some ranged attacks, while it sits protecting any objectives towards the middle of the board. While it’s alive and kicking the enemy cannot risk getting near, and since it can get a decent ranged gun, it will just become a really obnoxious threat in the middle of the board. 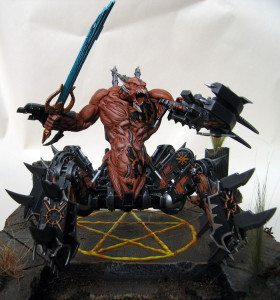 It’s slow. No Move through Cover, no Fleet, and a huge foot print, the Soul Grinder is likely the slowest unit in the Khorne Daemonkin unit. You can mitigate this slightly through Deep Strike, but then you’re relying on the reserves rolls, and without any banners, you’ll have a high chance of mishapping should you scatter.

In combat, while it has a decent number of attacks, it is only WS3 and I3, so if the enemy is armed for melee against AV13, they’ll probably be hitting you on 3’s, and quite possibly before you get to swing, plus if you charge through cover, which is easy to do with it’s wide stance, you’ll be at I1.

Finally, it’s Harvester Cannon is a bit wonky… While it does bring some anti-air to the mix, you still have to charge the target you shoot at, so firing the Harvester Cannon at a flyer means you probably wont be charging, and it will also keep you from firing the Phlegm Bombardment or the Baleful Torrent.

As I mentioned, when it comes to armoured vehicles, the Soul Grinder is one of the toughest you get in the army, and definitely the toughest that you’ll use on a regular basis. They are very flexible in how you can use them on the table top, so adding one to any army isn’t a bad idea. I don’t recommend taking them without a ranged weapon upgrade, though I suppose there might be a use for a stock one, perhaps if you’re spamming them in a Blood Host list where you could fit 8 in if you really wanted to go crazy. Overall, they may not be a must have, but I would have a hard time imagining an army that wouldn’t benefit from taking one.

Reserves is the way to go.

Just take some squads of bloodletters… give them horns… and when you bring a squad in from reserves you can bring on a friendly squad with daemon.

With the 5++, I think they’re often actually more durable than Land Raiders, since both tend to draw the kind of firepower (Melta, Haywire, D) where the difference between AV13 and AV14 means little or nothing.

It’s not really a big deal, because it’s not like it’s wasting massive firepower, but the fact that the Phlegm Bombardment makes the Harvester Cannon fire Snap Shots kind of annoys me, so I tend to go with just the Baleful Torrent, or even just leave it stock.

The Sword does add a nice boost, but I just can’t bring myself to shell out 25 Points for it. Definitely if it were 10, maybe if it were 15.

Great Unit overall, the Anvil to the MaulerFiend’s Hammer. It’s possible to go overboard adding stuff on, but it’s hard to go wrong with the basic decision to add one to a list.

Yeah, 25pts for +1A is just… unconscienceable. I personally like the Phlegm, though, even if it does make you snapfire with other stuff; it’s one of the few ranged weapons that actually scares most people and it can bring down Void Shields, ping HP off tanks, force MEQs to duck, and just generally Do Work for you.

+1A and master-crafted is essentially +2 attacks, since you’re far more likely than not to miss with at least one.

I agree on Phlegm though, fantastic weapon upgrade, really adds to the utility of the grinder.

Yeah, it’s an irrational dislike, but it’s there. Fortunately, you don’t have to model on the Mawcannon fire modes, so I can just add it in when I manage to get over that.

For a Kin army I like 1 grinder and 2 maulers. That feels like the right combo. For grinder spam I think I’d go all Nurgle Daemons. The soul grinder is definitely better than a defiler!

That’s what I run when I do a CAD, though the Blood Host really opens up the option of taking more.

The comparison with a Defiler is just ridiculous. If you give the Grinder Phlegm and Torrent, it’s cheaper than a Defiler, has pretty much the same weapons and statline, except for an extra Point of Armour everywhere. In exchange, the Defiler gets…a bunch of little Rules that will rarely have any effect.

And that’s on top of the fact that the Grinder has the option to leave that stuff off and be run super-cheap. I’d be way more into the Defiler if I could leave stuff off for a price break.

why you said 5++? how a SG have a 5++ and anyway if you fire harvester cannon you CAN fire any other weapon it is a walker

They are Daemons, so they get the 5++ save. The Phlegm Bombardment is Ordnance, so any other weapons the SG fires that turn have to snap fire.

yes 5+ i know but 5++ for me mean rerollable 5+ so i wondered, yes about phlegm i read is it ordnance i forgot that.

No, a ++ generally means invulnerable, not rerollable.

If not for stupid Grav, lol! Walkers should be immune to immobilized results. That aside, Soul Grinders are solid…except for Grav!

At least Grinders can do SOMETHING when they’re Immobilized. Poor MaulerFiends 🙁

Why the Soul Grinder os a walker and tau’s big armours are monstruos creatures is beyond any kind of reason. Soul Grinders will be so good if they were gargantuan creatures