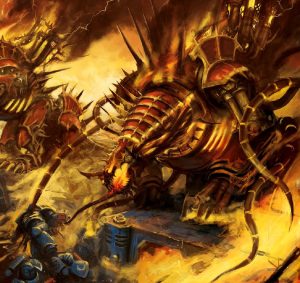 Hey guys, its’ Adam from TheDiceAbide again, here to talk about my favorite army in 40k, the Khorne Daemonkin! Today we’re going to go over a unit that is ubiquitous to nearly all KDK armies, the Maulerfiend.

The Maulerfiend is the war engine equivalent of a daemon possessed torpedo… with tentacles, fists, and high powered magma cutters. It flings itself across the field at incredible speed only to plough into the enemy lines, crushing vehicles in it’s wake. It’s equipment isn’t terribly fancy, and it’s tactics aren’t what you’d call “sophisticated,” but that fits right in with the ranks of the KDK. 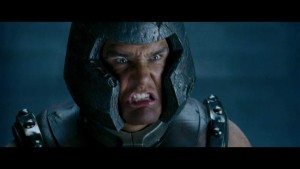 The Maulerfiend is essentially a fast combat dreadnought. It has some exceptional anti-tank power, and can even be a neussance for larger warmachines like Imperial Knights. It’s not terribly resilient, though it is a fairly inexpensive and fast threat to your opponent, the presence of a few Maulerfiends will almost certainly force your opponent to consider how to deal with them immediately. 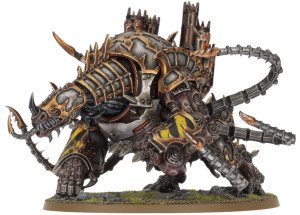 The first and most obvious tactic with the Maulerfiend is to run it across the board and slam it into something! Being incredibly fast, it can keep up with Bikes, Bloodcrushers, Flesh Hounds and Bloodthirsters, adding to your arsenal of units that are moving 12″ and want to be in melee. Since it does strike at S10, it is a deadly threat to just about anyone, so having 2-3 of these backing up your other fast units means your opponent is going to be forced to make some tough decisions. The best part is, thanks to Daemonic Possession, they’re going to have to Immobilize, or outright destroy the Maulerfiend to have any reliable chance of stopping it, which hopefully means you’ll at least be getting a point of Blood Tithe out of the deal! 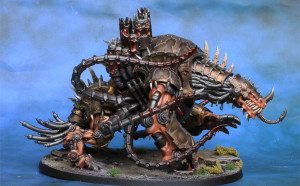 Aside from just being a distraction, the Maulerfiend does actually have some good battlefield roles. When armed with Lasher Tendrils, it makes a great buddy team with the Bloodthirster of Insatiate Rage to go after big game, like Imperial Knights and Stompas. Delivering both of these units into a Knight means it will be reduced to one attack and must decide if it’s going to swing at the Mauler, which it will hit on a 3+, or go after the Bloodthirster that it will only hit on a 5+… If they go for the Maulerfiend, the Knight is going down, if they go after the Bloodthirster, there’s a good chance they’ll miss entirely and still end up getting annihilated.

Maulefiends armed with Magma Cutters are devastating against vehicles, there is a respectable chance of hitting with all your attacks, meaning if the fists don’t wreck the tank, the Magma Cutters hopefully will finish the job. Against immobile vehicles and fortifications your’e guaranteed the two extra meltabomb hits, making them ideal for racking up Blood Tithe through eating Drop Pods, should they not be needed elsewhere. You can even have them run buddy-buddy with a Lasher Tendril armed Mauler, doing the same kind of 1-2 hits that the Bloodthirster combo is doing, having both of them on a Knight means the Knight needs to pick between taking out the model reducing it’s attacks, or taking out the model that’s most likely to do heavy damage.

The greatest thing about Maulers is really their speed. The KDK army is packed to the gills with fast melee units and having a vehicle that can get across the board and in combat as fast as the Maulerfiend is key. If the enemy lacks melee anti-tank, the Maulerfiend is really going cause them problems if it gets in combat, and if their only option is Krak Grenades, the Mauler will still probably hold them down for a few turns, long enough for other units to make it in and wipe out the enemy.

Unfortunately the Maulerfiend isn’t without it’s flaws, the most glaring one is it’s weak armour 12/12/10. Because it is only moderately armoured, it is pretty easy to take down with focused fire. If you only have one Maulerfiend on the board, and your opponent finds them to be a big enough threat, it isn’t much of a challenge for them to take it out of the game. Really, to use Maulerfiends, you will have to invest in at least 2.

The other major flaw in the Maulerfiend’s design is the lack of a ranged weapon. While we all know it’s made for one job, the lack of any kind of gun means should you end up being Immobilized, you’re totally screwed, it will just become a big block of daemon possessed brass and steel, spitting and cursing, since it will perform no other function the rest of the game. Best case scenario, you’re immobilized on an Objective, though it never seems to work out that way.

For the price tag, Maulerfiends are an amazing unit in any KDK army. They embody the strengths of the army perfectly, fast and hard hitting. Be mindful of what the enemy can counter attack them with, since their AV12 means they aren’t all that resilient, and whenever possible run them in 2-3’s or more if you can.

MaulerFiends were what got me started with KDK. They’re not the best (very few Attacks and WS3 makes them really unreliable, and the fact that the DK ones are 5 points more than the CSM ones for no apparent reason confuses me), but they’re really fun, and when they work, they’re awesome.

They’re the main reason I find it frustrating that KDK don’t have access to WarpSmiths. When I started my Khorne Army as a mix of CSM and CD before KDK came out, I had a WarpSmith in there, just because there ain’t nothing sadder than an Immobilized MaulerFiend.

I’d personally say take at least three. Especially in this era of Grav, where they can get Immobilized so easily. All three of mine have Magma Cutters, and I do like them, but I need to add at least one or two with Lasher Tendrils, to help deal with things like Knights.

Oh, yeah, forgot to mention: They love having a Void Shield Generator around. Best thing going to keep the Grav away. And with stuff like Scouting Flesh Hounds, it’s usually pretty easy to keep the Shield Zone screened so Drop Melta or whatever can’t land in there and and circumvent it.

Doesn’t Move Through Cover allow you to strike at initiative even when charging through terrain?

Also, with the advent of grav I think Maulerfiends have decreased in utility. It’s so easy to get immobilization results with grav amps.

Nope. It ignores the 2″ penalty on the distance, but not the Init penalty. Otherwise Genestealers would be in a way better place.

Move through lets you avoid the minus two inches when charging through terrain, but does not help on initiative.

It’s an excellent unit, but like you said grav really counters them 🙁

so as phosphor blasters for anything meq related, yet people still take meq regardless

There’s a difference between ignoring the Armour Save on a 14 Point Model and (essentially) eliminating an entire 130-140 Point Unit with a single 6.

who takes only one model? admech are likely to take your freaking unit outright with that gun

Heavy Phosphor Blasters average out to about 80 Points each, usually Twin-Linked BS3. That’s killing like 1 MEq per Turn on average if they’re in any kind of Cover whatsoever, two if they’re in the open or you’ve got Ignores Cover somehow. To take out even one 70-100 Point SM Combat Squad in one round, you’re looking at directing something like 400 Points worth of Phosphor at it. If we add a couple more Marines to equalize the Points with the MaulerFiend, we’re looking at over 500 Points to wipe that in one Turn.

A single 80 Point DevCent with Grav Cannon and Amp has reasonable odds of neutering a MaulerFiend in a single go. A pair of them have excellent odds of it.

Grav Cannon with Amps are seriously more than twice as good at taking out MaulerFiends as Heavy Phosphor Blasters are at taking out MEqs, Point for Point.

you honestly realize the likelihood of an 80pt grav cent who even needs a pod to equate to begin with, isn’t likely to strip 3 HPs even with his “5” bs4 shots glancing on 6s with reroll … if you babble about bs3, there are solutions to that with war convocation, elimination maniple, or just freaking canticles ,,, either way they are doing better for at least two turns … idk about dunecrawlers using phosphor guns though but they even get TL & bs boost if it counts for something

Yeah, Grav is a punch in the nuts for Walkers =(

These things seem to be the only Walkers that can bring the pain. I found myself lucky enough to stare down at 3 of them and 2 Bloodthirsters and with their speed I just couldn’t take them down before they got to me. And every time they did get into contact it was a guaranteed unit lost sicne I couldn’t hurt them. Of course that’s heavily dependant on the opponent. With Marines and everyone having a potiential lucky shot with a krak grenade that just might not be worth it.

Fighting Marines can be very painful for them- every guy in the squad are swinging first, hitting on 3s and glancing on 6s, which means you’re taking an HP of damage about as often as not, and many of them pack Meltabombs (which are serious bad news.) The Mauler will still typically kill the squad off, but they’re paying a non-trivial cost in attrition to do so and a lucky roll can see you dead before you do anything.

as stated, grav just murders them. otherwise, they’d be great.

What does the typical KDK tournament army look like.

Probably a Gorepack, so Bikes and Flesh Hounds. MaulerFiends or Soul Grinders. JuggerLords. Helldrakes. Spawn. Likely a Knight or Brass Scorpion. VSG to ward off Alpha Strikes. Some BloodLetters to fill in mandatory slots. Some mix of that sort of stuff.

The other common version is the Hellforged Hunting Pack, which is a Brass Scorpion and 8 assorted War Engine choices. MaulerFiends, Soul Grinders, Helldrakes, or a couple of FW options.