Blood Angels Hot or Not? Troops (and Rhino!)

Phat J here in my next installment of Blood Angels, Hot or Not? In this series we’re going to take an in depth look at the much maligned codex and figure out which units are worthless and which ones are worth taking a second look.  This time we’ll be looking at the troops units in the codex, which means it will be a struggle to pad this article to more than 500 words. Oh what the hell, throw in the Rhino as well! 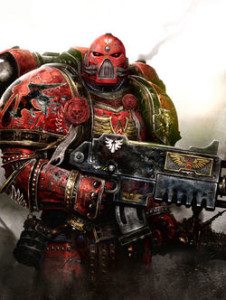 The Blood Angels Tactical Squads are your standard Space Marine Tactical Squads with a couple of key differences.  As with all Blood Angels units, the Tactical Marines come with Furious Charge, which makes for a bit more oomph in the assault phase but to be honest it’s not that much of an improvement without the old Initiative bonus.  One of the real benefits of taking BA tactical squads is their ability to take Heavy Flamers, which is unique to their codex and is kind of a big deal.   Tactical Squads in the BA codex do what they do in the Space Marine codex and that is jump onto objectives and sit there for the rest of the game. They don’t have a serious punch in close combat and put out moderate amount of firepower.  A good kit for them is a Combi-Melta, Melta Gun, and Heavy Flamer in a Fast Rhino. 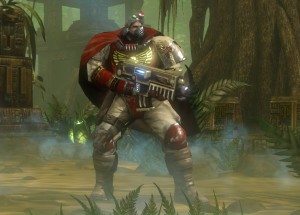 Oh those poor, poor Blood Angel Scouts.  Since the codex was given the Dark Angel treatment, with an updated codex released right before a new and improved Space Marine codex, their Scouts are still Ballistic Skill and Weapon Skill 3.  The WS 3 is especially disheartening given the Furious Charge buff they get from being a Blood Angel.  Imagine close combat Scouts with 3 WS4 S5 attacks on the charge.  They also don’t have a Land Speeder Storm to take as a transport, which would include their usefulness as well.  There’s really nothing special about these guys, they are lamer than their more wealthy cousins and don’t really do anything really well. 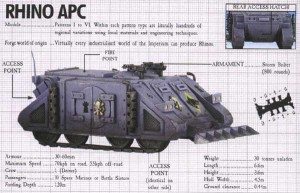 The one rare area that the Blood Angels have something going for them is in their vehicle selection.  With their overcharged engines the BA Rhinos are Fast Vehicles, meaning their units can hit 24″ a turn which is fantastic for late game objective grabbing.  This also means the Rhino can move 12″ and the occupants inside can blast a target without having to snap fire.  Other than the Overcharged Engines, the Rhinos have all the same rules as your standard Rhino so nothing to write home about there.

So there we have it.  A short entry this week and not much to talk about, unfortunately.  Blood Angel Tactical Squads in fast Rhinos isn’t TOO bad, and will be the mainstay of a lot of BA player’s army.  Next week, we look at the stuffed Elites section, Part 1!

The Fast Vehicle rules state that the occupants don’t count as snap firing if the vehicle moves 12″ unless I read that wrong.

As far as I know, passengers snap shoot if the vehicle moves at cruising speed (page 80).

What page are you looking at for this? The fast vehicle entry on page 88 only has a few lines and none of those are referring to passengers in my book.

I’d love if that were true because the white scars formation letting scouts disembark after moving 12″ would be more useful then.

That is not the case. Fast vehicles work exactly like other vehicles in terms of moving and firing with the occupants.

I don’t think the tacticals really deserve a hot rating. To me, If they aren’t podding in with a heavy flamer, I’d rather take scouts. They could be ws/bs 1 for all I care. They can do their job, which is to sneak on from outflank and hold an objective with obsec. The fact that they can threaten enemies nearby with the possibility of a flurry of s5 attacks if they don’t leave or deal with them is pure bonus. With enough units on the table, mine have caught and swept a good number of scatbike units that were busy shooting at something else.

The troops is going to be one of the weakest parts of any modern BA list anyhow. Scouts let you use less points than tacticals so you can take more of what’s actually doing work on the table. Having them come with their own deployment tricks instead of having to pay for a transport widens the gap even more.

I think tacticals can be very powerful. A five man squad can have a meltagun and two melta pistols in a drop pod. Or you can go heavy flamer with 2 hand flamers. The special pistols can lead to very fun MSU lists.

The most frustrating thing is no LSS, as it synergises so well with close combat scouts. However i don’t really thing the ws3 is a huge issue, they are usually hitting on 4’s regardless. It still would be nice if they updated them. I dunno, prefer scouts over tacticals just because of the cost and additional special rules. 2 min squads for holding objectives or grabbing linebreaker, most of the time they are just going to ground anyways.

Heavy flamer tacticals is pretty sweet though! I just wish that troops were more useful in the current meta. Rhino rush tacticals could probably still sneak in a few wins though, even though they are not very point efficient.

Vertias relic + CAD for 4 rolls on stealth ruins trait so the scouts get 2+ go to ground is quite decent.

Thanks for the writeup! Looking forward to reading your thoughts on our elite slot.

What is the math hammer on getting Conqueror of Cities from the strategic table with a BRB CAD and the Veritias relic? You get two rolls on the chart re-rolling duplicates with the relic and you get to re-roll each of your two rolls with the CAD.

Would 6 objective secured tac squads with las/plas razor back squads be competitive if you had a solid chance of rolling that trait? +1 to ruin cover saves and ignoring dangerous terrain tests in ruins looks good on paper.

For 990 points you could get 6 five man squads with heavy flamers in laz/plas fast razorbacks. You give up the +1 to initiative but you still retain furious charge. Or for 1050 points in troops you could give your five man squads a lascannon for 12 shots a turn with 3+ cover saves in ruins. Most tables I’ve played on are normally covered with ruins for terrain.

Even night vision and night fighting on first turn would be good for a troop set up like this. Would give you a free turn of shooting.

Then again If you built a list around the Vertias relic you cannot take Dante. But the idea of move through cover (ruins) mech list for BA seems decent. Move through cover land raider’s would be awesome. I suppose it all depends on what the math hammer is for being able to get Conqueror of Cities.

Thanks man, it’s back to the drawing board for me then.

If Blood Angels had a Battle Company I would be all over that! Fast Rhinos, Meltas, Heavy Flamers…oh my!

They do have a battle company formation, just not a gladius formation for the free transports.. Objective secured and the red thirst. It’s not bad but it missed the train on getting a good rules similar to DA in 6th. I look forward to seeing their next version in years to come but SM just do everything better.

Here’s the battle company formation I spoke of.

“Requirements: 1 Captain, 1 Chaplain, 1 Command Squad, 6 Tactical Squads, 2 Assault Squads, 2 Devastator Squads, 1 Death Company Squad, 1 Dreadnought, 1 Furioso Dreadnought Restrictions: None. Special Rules: The Angel’s Virtue: If this Formation is chosen as your Primary Detachment, you can re-roll the result when rolling on the Warlord Traits table in Codex: Blood Angels. Objective Secured: All Troops units from this Formation have the Objective Secured special rule. A unit with this special rule controls objectives even if an enemy scoring unit is within range of the Objective Marker, unless the enemy unit also has this special rule. The Red Thirst: In a turn in which a model from this Formation charges into combat, the model adds 1 to its Initiative characteristic until the end of the Assault phase. A model that has made a disordered charge that turn receives no benefit from the The Red Thirst. Source: Codex: Blood Angels”

Technically, they do get their Blood Angels Battle Company which gives them the +1 I on the charge, Ob Sec, and a reroll on their warlord table.

But I’m sure you meant the awesome Gladius Strike Force Battle Company.

I doubt they will ever get free fast transports though. Probably some other command bonus like RG and WS got in their composite detachment.

Maybe? If so, man, that would be a fun army to play!

Short and sweet, i dig this, more!

Honestly I feel like my favorite troop setup is worth mentioning here, as are fast Razorbacks since with las/plas they can move 12in and still fire everything.

Its expensive, but really versatile. The ride brings ap2 and some anti armor to the table while the squad inside is on anti infantry duty. I can’t count the number of times I’ve rolled a razorback up to an enemy unit, bailed my guys out and blasted them with 3 templates, 3 ap2 shots and some bolters. Managed to ace a 5 man squad of tomb blades that way in my last tournament.

Tldr: fast razorbacks are awesome and have become a mainstay of my lists.

So, can you fire a heavy flames after disembarking?

Yes you can. Heavy Flamers are assault weapons. So you have a 20″ threat range w/ the flamer alone. 6″ move” 6″ disembark and an 8″ template.

And my favorite BA troop unit….

Cassor the Damned: Character dreadnought that can issue challenges and be targeted by “the quickening” for +d3 init/attacks. Take him in a CAD and you have an OS dreadnought. Add in a Lucius Pattern droppod for some turn two S10 AP2 assaulting nastiness.