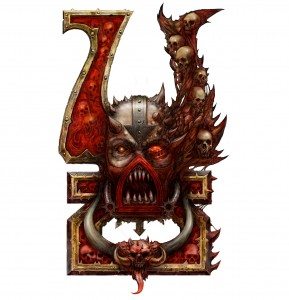 Blood for the Blood God!

Blood for the Blood God! Skulls for the Skull Throne!

Warbands of Khorne Daemonkin are zealous followers of Khorne (who’d a thunk it?). Through acts of savagery and bloodshed, they show their devotion, and there is no act more sacred than summoning Bloodthirsters. To the Khorne Daemonkin, Bloodthirsters are divine beings, archangels of destruction who are the purest incarnation of their gods wrath, and they are willing to pay the ultimate price to see them and their daemon cohorts summoned into battle.

Not all Khorne warbands are Daemonkin, the Daemonkin themselves are only the most fervent, insane, and bloodthirsty followers. Many of these begin as merely a mortal host, united by their fanatical devotion to Khorne, worshiping a single mighty Bloodthirster, though as they perform greater acts of violence, Khorne’s warp-born legions are slowly drawn to their ranks. The culmination of a warband’s power is displayed when a Bloodthirster bursts forth through his chosen vessel to lead them into never-ending slaughter.

Unsurprisingly, Khorne Daemonkin are primarily a close combat force. Of the Chaos forces available currently, there is little dispute that they’re the most effective. They are an amazing amalgam of fluff and rules, where through playing with the army, you actually feel like the special rules for the army do a great job of matching the lore of the army.

Blood For the Blood God!

Without a doubt, the rules that brings this all together is called Blood for the Blood God! which allows the accumulation of Blood Tithe. You will generate a point of Blood Tithe each time a unit with the Blood for the Blood God rule kills an enemy unit, or is killed, or each time a Character with the rule slays an opponent in a challenge, or is slain in a challenge. Basically, as long as people are dying, you’re generating tithe! Khorne cares not from whence the blood flows! At the beginning of each of your turns, you can spend your Blood Tithe to manifest one of the following powers (1-4 affect all units in your army with the Blood For the Blood God! rule), the more Tithe you spend, the more powerful the ability, though you can only ever use one ability a turn and any unspent Tithe is wasted:

This rule really gets brutal, it is quite common that on the second turn you’ll already be getting army-wide Feel No Pain, and by the third turn you will hopefully be summoning a Bloodthirster or other daemons to grab objectives, while the hardest hitting units smash the enemy in combat. 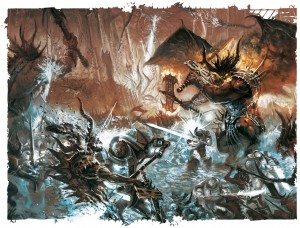 The big benefit to running the Blood Host is the Blood Frenzy command benefit, which in short, gives you an additional Blood Tithe at the beginning of the turn, before you spend Blood Tithe. So you could start your first turn with Adamantium Will (though you probably wont), but more importantly, if you only have 2 Tithe, you’ll get bumped to 3 for Feel No Pain, or if you have 7 Tithe, you’ll go up to 8 to summon a Bloodthirster.

You will have to pay a somewhat steep tax in the form of Possessed, though with S6 on the charge they can occasionally catch people off guard, or wipe out a small unit that they eventually catch up to, since your opponent will probably be worried about Maulerfiends and Bloodthirsters jumping down their throat, you are often surprised to find them in charge range of a small scoring unit on turn 5. To get a Heldrake in this formation, you’ll be paying even more tax to get 2 units of Raptors and a unit of Warp Talons, so it will very much affect your force (alternatively, you can take an additional Combined Arms Detachment with another HQ and couple units of Cultists to get a Heldrake).

Of the Auxiliary choices, the Gorepack by a mile will probably see the most use. Chaos Bikers aren’t a bad unit, and can deliver multiple meltaguns into double-tap range, on a reasonable budget, plus you will probably want many units of hounds. Using this formation’s scouting hounds to put pressure on the enemy from the first turn will help keep firepower off of your softer units. War Engines are also awesome, as it means you can basically take as many Soulgrinders and Maulerfiends as you like. 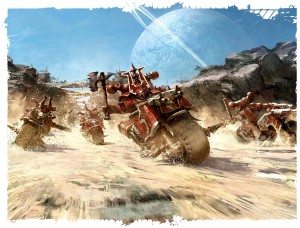 Many of the units in the army are capable of closing the gap to get into combat fast. Units like Maulerfiends, Chaos Bikes, Flesh Hounds, Blood Crushers and Bloodthirsters will often end up in combat on turn 1 or 2, while your other units will be the mop up crew. As you take casualties though, you’ll be able to summon a few more units during the game to make up for your losses. With the Blood Tithe mechanic, you’re often rewarded for taking MSU style lists, as you will quickly rack up Tithe to enhance your forces or summon reinforcements.

The single most important thing I’ve found to keep in mind when playing Daemonkin isn’t when to get into combat (because the answer to that is NOW!), it’s who to get into combat with. Units capable of delivering hard hitting firepower are a high priority to tie down at all costs, even a unit of 5 Flesh Hounds can keep an Imperial Knight tied up for a full turn, costing your enemy a turn of shooting so that your more vulnerable units are safe to advance, or buying time for a Bloodthirster of Insatiate Rage to engage it.

What have been some of your winning Khorne Daemonkin strategies? And as always, be sure to check out theTactics Corner for more great articles!