A near-omnipresent inclusion in Necron lists last edition, the Royal Court has since fallen from grace and is rarely a feature of armies these days- but how bad is it, really? Click to read on, or visit the Tactics Corner for more reviews and strategies.

The Royal Court is a pretty simple formation consisting of a mandatory Necron Overlord, and then one to three models each of Necron Lords and Crypteks; it’s a big ol’ assortment of HQ choices, basically. Any of the characters can be swapped out for their named counterparts, including the Overlord for Imhotek the Stormlord if you really want to shoot yourself in the foot. Unlike many such formations, the characters are not forced to “ball up” and form a single unit- though they can do so if you wish. Usually, however, you’ll want to distribute them amongst your other units during the game in the normal fashion.

A Royal Court is a Command choice in a Necron Decurion, so you will always have the option to pick one if you want.

Though all of the models in the formation have their usual special rules intact, the only actual rule that the formation itself gives is allowing you to reroll your Warlord trait on the Necron table if you want- a rather weak benefit considering how many points you’re forced to invest into it. 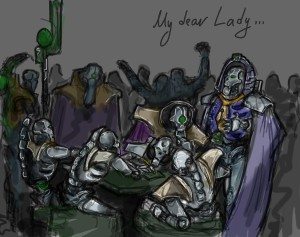 The Royal Court is, quite frankly, not very impressive for a number of reasons. Its mandatory choices are fairly limiting- when taken in a Decurion, it means you are fielding at a bare minimum 280pts of HQs (two Overlords, one Lord, one Cryptek) and more likely something like 350-400pts. The required Necron Lord and Overlord are particularly galling, since not only are you already fielding one Overlord (isn’t there normally only one per world?) but the former is just an inferior version of the latter. Added to the fact that you are getting virtually no command benefits for the Court at all and it’s just not a choice that you will see very often outside of some niche uses.

The most likely case is for a Decurion, where you have no other way to get access to additional HQs beyond the initial Overlord any other way (aside from taking a Combined Arms or whatnot, of course.) Of course, in a Decurion the Cryptek’s bonus is all but worthless itself- however, at least some use can be made of the additional characters there, since even relatively-small squads will easily be able to soak enough damage to keep them alive. It’s not an exciting choice for the most part, but in larger (2K+) games it’s a reasonably-defendable choice at least.

The other situation where you can potentially make use of a Court is when building a deathstar for your Necrons. The typical Necron variant is a 3++ save unit (most commonly Wraiths, but occasionally Lychguard) paired with Orikan the Diviner and another named character, either Nemessor Zandrekh or Varguard Obyron (and occasionally both.) With the ability to replace our normal versions with unique ones, this actually works out rather perfectly- we have our mandatory Cryptek (Orikan) and the potential for either a Lord (Obyron), an Overlord (Zandrekh), or both. Combined with a Canoptek Harvest we can actually build such a deathstar without using anything but formations, though this is probably not the route most will go- however, it is an option.

Outside of these uses, the only potential situation you’ll find yourself looking to a Court is when you desperately want more characters but don’t want to take additional Troops (and don’t have the Troops to support such detachments already.) This isn’t at all a common thing; while Necron characters are certainly not bad, neither are they something you typically need or want to spam out in great numbers. There aren’t enough relics that you actually want to obsess over getting the full collection and if you’re trying to maximize Reanimation Protocols it’s much easier just to get the universal 4+ from a Decurion (or the aura from Szeras) than it is to field 3+ Crypteks spread across all your units. 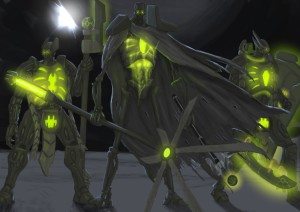 Though the Royal Court is superficially similar to its old incarnation in the 5E book, the greatly-altered functions of its component units as well as changes to the Necron book in general mean that it doesn’t really fill the same function at all and, sadly, has very few uses even for the most creative of players. HQ models can easily be traps for unwary players to overinvest into if they aren’t careful and the Court is a perfect example of such a trap- spending 400+pts on it is pretty easy to do and will leave a list with a very, very low model count.

Thoughts? Additions? Questions? Arguments? Riddles? Post ’em in the comments section below, and as always remember to check out the Frontline Games store where you can pick up all GW product for up to 25% off

I used this formation in my brief necron experiment with mass scarab farm. They just lack the punch of any other Death Star, and lack the fun too. At least that was my take. Very immobile and though they might be a tarpit they certainly don’t excel in combat. And wow they are a points sink!

“Any of the characters can be swapped out for their named counterparts, including the Overlord for Imhotek the Stormlord if you really want to shoot yourself in the foot.”

At least you found something his staff is good for 😉

I like taking a Royal Court for the Cryptek element, as I give a Chronometron to each in order to protect my squads from AP 1-4 weapons. It’s a pretty solid combination along with the +1 Decurion RP bonus and the reroll 1’s bonus from the warlord.

I’m not a fan of the O-Lord/Lord ‘tax’, but I typically include them within units to provide a little extra armor-punching power with either the Staff of Light, or if I have the points for them, Warscythes.

I tend to run a Decurion with formations exclusively, so it works for me and makes my low model count army extremely resilient.

I’ve pretty sure you only need to take one Overlord as part of the formation (ie, minimum model count = 3).

Yes but you usualy take it to get more HQs into a Decurion which means you alreaedy had to take an Overlord for your Reclamation Legion.

Exactly so. There’s essentially no reason to take the Royal Court outside of a Decurion, so you’re ending up with a minimum of four HQs at that point.

I have to admit, I have an urge to take a maxed out Royal Court in a Decurion with Trazyn as my Warlord at some point, just to play keep-away with that Warlord VP. I know it wouldn’t actually work out well at all, and I doubt I’ll ever invest the money or time to do it, but the idea amuses me, and feels kind of appropriate for Trazyn.