Today we are going to look at PanOceania (PanO), what they do well, units to watch out for, and some ways to take them down. Be sure to check out the Tactics Corner for more articles like this.

PanO is described as the one true hyper powers of the Human Sphere- And they reflect this on the table quite well. PanO is typically categorized as a “high-tech” faction with all of the toys and it’s for good reason. PanO has access to some of the best equipment in the game; MULTI weapons, Thermo Optical Camo (TO Camo), Multispectral Visor Level 2 (MSV2), are all widespread in this army where most armies only have limited options- if they have access to these tools at all. Now let’s see what some of the nastier units a PanO player can bring to the table: 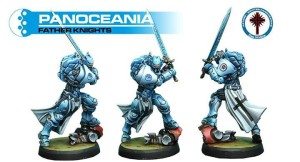 –Father Knight Hacker: This model came with Operation: Icestorm, so there are a lot of them out there. The model has several profiles, and while all of them are useful, the hacker profile is where this model goes from “shiny” to “dear-lord-that-is-too-bright-kill-it-now”. At 14, the Father Knight has the WIP to make use of his hacking device when accomplishing objectives and attacking other hackers. With a Biotechnical Shield (BTS) of 9, Armor 5, and 2 wounds he can weather a fair bit of damage and can operate freely on the front lines. On top of being a great hacker, puncher, and shooter, this profile even includes D-charges – something unusual for a hacker, meaning he can blow holes in walls and doors, destroy objectives, and even threaten Tactical Armor Gear (TAGs).

Guarda de Assalto (GdA): A lot of people asked how to expand their army beyond the contents of Operation Icestorm and this was one of the models Corvus Belli recommended – it has been one of their best sellers since. The GdA unit is actually two models, the trooper and the Auxbot. BS 15, Armor 3, and BTS 3 are respectable stats by themselves, but add in the Auxbot’s smoke grenade launcher, it’s shotgun, and the trooper’s heavy flame thrower and you have an exceptionally dangerous unit capable of operating independently from the rest of the army. The combination of smoke plus multiple template weapons means this is an aggressive unit that is difficult to contain and will rampage through even well deployed, in cover, light and medium infantry. 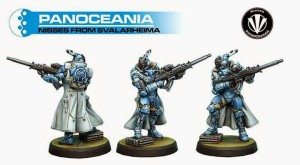 Nisse: Another Icestorm model. At movement 4-2 the Nisses is slower than a lot of the rest of PanO. However it is an extremely potent sniper. MSV2 means it will ignore smoke, Mimetism, Camo, TO Camo, and Optical Disruption device (ODD), meanwhile the Nisse has mimetism of it’s own. With the combination of MSV2 AND Mimetism, the Nisse is a unit that is extremely adept at killing models while stifling attacks against it. It is also packing a MULTI Sniper Rifle, so it can threaten heavy armor, multi-wound, and “No wound Incapacitation” models. This sniper is the whole package letting it shut down vital movement lanes and pin down high value models with little fear of reprisal.

TAGs (all of them): Most armies have access to some sort of TAG, PanO has access to about as many as everyone else COMBINED. Long range fire support? Draigo. Short range? Seraph. TO Camo? Cutter. Ultra-heavy armor? Joutum. The list goes on. Some people say TAGs are a point sink, I say they have never seen a properly supported TAG wreck an entire army John Rambo style. It’s true you can take TAGs down with hacking and even lots of low powered “trash fire” but with high BTS and incredibly good armor it’s going to take lots of punishment before it dies. Either way it soaks fire for the rest of the army or wrecks everyone who isn’t ready for these meta-busting bulwarks.

Now let’s take a look at how these units can come together in a list: 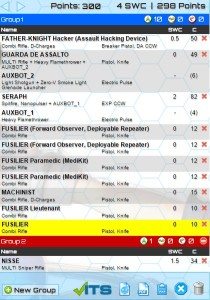 This list does a few things: first it supplies a triple threat in the form of the Father Knight, a TAG, AND a GdA. Second, it gives enough orders to power the heavy hitters- 11 orders in a list isn’t a lot, but it’s enough to push forward and dominate the central area , lock down an important objective, and prevent an opponent from completing their objectives. Third, it gives multiples of most specialist types making it slightly more redundant. This list can score points, wreck anything it comes across, and has the armor to take a hit on the chin and keep on advancing.

It’s true the lone Nisse will only have only it’s own order, but put him in a good spot and he will do most of his work via AROs. Swapping out the TAG for several lower points units would allow a PanO player to bring more orders, which is always useful, but I wanted to show that all of these units can conceivably be brought in a single list.

The silver lining to the wrecking ball of pain that PanO can deliver is that they are expensive. Their Line Troops are decently cheap, but their high tech and heavy armor all comes with an appropriately high price. PanO players generally have to make choices and tradeoffs in what they are going to bring or find themselves short on orders.

That high cost can mean that multiple, overlapping specialists aren’t always possible – the loss of a specific unit can mean the difference between domination and being physically unable to complete objectives. Additionally, by over specializing PanO can find itself blindsided by unanticipated threats.

Let’s translate these weaknesses into some actual ideas on how to take down a PanO army. The way you win a game in Infinity is by playing the mission, not slaughtering your opponent so the reverse is true as well: You have to keep them from playing the mission.

Typically this takes the form of targeting specialists. PanO won’t normally have a lot of overlapping specialists. So if you can assassinate those one or two doctors or hackers then you can effectively remove PanO from taking objectives that require that corresponding specialist.

When you are dealing with PanO you will be dealing with at least one high armor unit, be it a heavy infantry or TAG. You need to have redundant methods of taking them down. Ideally try attacking from multiple vectors to force themto make a choice. By setting up a anti-tank unit near a hacker you can force the unit to choose between making a dodge face to face roll against a AP+EXP rocket or trying to reset against a hacking roll, leaving them undefended against the other. Word of warning though, PanO units can be tough as nails so try to have some redundancy built into your lists in case you wiff a roll or are simply unable to overcome their thick armor and high BTS and a TAG steamrolls your carefully laid trap!

And remember, Frontline Gaming sells Infinity product at up to 25% off, every day!

Posted on January 15, 2016 by Reecius in Infinity, Review, Tactics

I’ve been dipping my toes into this when a game of 40k would just be too long. Really excited to see more content about this from you guys.

Yeah, it is a fun game! We plan on having regular Infinity content coming up!

I’d love to see you guys do some videos, as your 40k stuff is always top notch, but I realize the logistics behind video content makes things a tad more difficult.

I’m a VERY new player to the game so, personally, articles along the lines of “What I wish I had known when I started” or even general/faction-specific list building theory would be high on my list.

I have a small Morat force that’s beautifully painted. If someone wanted to come in and play, that would be cool to show in a video.

The day I can book transatlantic flights to play a game of infinity. I wonder if I can use that as a valid reason to ask for a raise..

Maybe something like faction and sectorial overviews. The Infintiy forums have rundowns of specific units but that almost seems to be a step too far in already. As in, its nice to know what a Swiss Guard with Missile Launcher does exactly but a general rundown of how NeoTerra army plays for example.

Anyone here planning on taking PanO to LVO?

“Some people say TAGs are a point sink, I say they have never seen a properly supported TAG wreck an entire army John Rambo style. It’s true you can take TAGs down with hacking and even lots of low powered “trash fire” but with high BTS and incredibly good armor it’s going to take lots of punishment before it dies.”

That is, if your opponent doesn’t crit you with Viral ammo. 😉 The risk is always there of course, but it’s a lot more painful to loose that super expensive TAG to random dice than it is to loose pretty much anything else – and that’s why it’s a points sink. Despite good stats it’s still so very vulnerable.

Glad to see you cover Infinity more though!

Do you have sideboards in Infinity?

That’s completely up to the TO, I’ve seen tournaments who has both one fixed list as well as two lists. So that at least gives you a chance to use it!

But mostly I’m probably just bitter about crits, because even when I apply a -12 modifier to my opponent they always manage to crit me on a 1… XD

Ah, OK, nice. I could see Infinity very easily using multiple lists due to the low model count. Seems like it would be a fun way to go about it.

That sounds like a fun way to go about it.

That was great thanks. Just the sort of help I need getting into the game and lucky for me even this faction. And I hadn’t even considered the Hacker option for the Father Knight yet. My brain kind of went into “bleh 40k space knights who just hate everything” mode then I looked at him and shut off.
Anyway glad to see Infinity content turn up here, this place is turning into my favorite wargaming content source at record speed.

I am stoked we have some Infinity content, too. I like the game but am a total n00b with it.

Then you too know the joy of going “Ohmygodeverythingsireactingandshootingatonce” brain overload.

I think must people had that reaction, and their second was to think of him as only a gave puncher based on the model.

He is really good at punching, but his hacker option is kind of a hidden gem.

Yeah, this sort of article realy helps break out of this sort of edge in patterns of thinking. He has good WP for PanO and your opponent might not realy be prepared for a specialist with his sort of fighting and staying power.
Another one I’m realy looking at right now is the Swiss Guard Hacker. For one thing since that’s a wonderful use for the ORC from the Operaiton Ice Storm box. He has the right armor and gun, just needs the proper paintjob. And its not likely that anyone actualy wants to use the ORC itself right now.