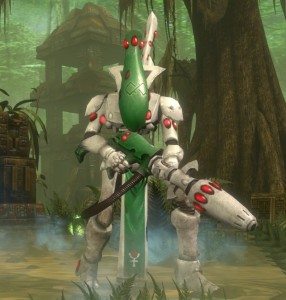 Hello all, Medicore Gamer here. I never thought I would be sitting here writing an article about my dreaded enemy, the Eldar. But I’ll take a few stiff drinks, and I suggest you do too, and let’s talk about Wraithguard.  If you want to read up on more tactics check out Frontline’s Tactics Corner.

At the outset, I want to be completely honest about something: I don’t play Eldar. I, you see, have dignity and a soul. But I’ve been playing 40k since the late 80s, and have pretty consistently since that time been getting bent over the table by Eldar. No matter what decade, it always seems like there is some much more talented player than I in my gaming group who plays Eldar, and that person regularly takes me to the woodshed.  They are my eternal foe.  I’ve developed a bit of PTSD from this.  [Twitch]  But I’ve come to know their sneaky alien ways, and I admit to a grudging respect for the space elves. And one of those units I’ve come to fear is the Wraithguard.

Before delving into rules and tactics, something about the Wraithguard needs to be acknowledged first. They are classic 40k, and beautiful in their design. Wraithguard, with their spindly appendages and huge alien heads harken back to the beginnings on 40k. Wraithbone constructs fueled by the souls of the departed capture, perhaps more than any other unit, the “otherness” of the Eldar. When you field Wraithguard you roll in style, wrapping yourself in the history of the game. And for that reason alone, they are an excellent choice. Oh, and they also are great on the table. 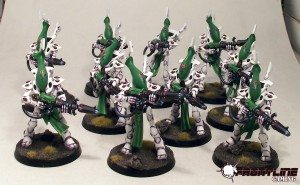 A Wraithguard is a Bulky, Toughness 6, 1 wound infantry model, with a 3+ armor save. While the T6 helps, like most Eldar, a Wraithguard is somewhat fragile.  Lacking an invulnerable save, or reanimation protocols, or Feel No Pain, or multi-wounds, they are vulnerable and must be used with precision.  The unit comes stock at 5 models for 160pts, but can be increased to a maximum of 10 at the cost of 32pts each. They possess the Ancient Doom rule, and are Fearless. They may take a Wave Serpent as a dedicated transport for 110pts.

They come stock with a Wraithcannon, a 12” range Str D, AP2, Assault 1 weapon. With their BS4, even under the modified D rules for ITC, a unit of Wraithguard toting Wraithcannons can demolish darn near anything they point their weapons at, assuming they can get in range.

For ten points more per model, you can give each Wraithguard a D-Scythe. D-Scythes are a Str 2, AP2 flamer template weapon. However, you subtract 1 from the roll on the D table, putting 6s forever out of reach, and resulting in zilch on a 1-2.  Even with that limitation however, we’re still talking about D strength flamer templates!  I need another drink.

Wraithguard are an odd unit, particularly in environments with modified D tables, such as ITC, as we’ll talk about in a minute. But whatever weapon configuration is used, the first obstacle to overcome is range. Wraithguard need to get right up in the enemy’s face to do their job, and that requires a way to get them there. However, the optimal transport option varies by the weapon they’re carrying.

The first choice is the Wave Serpent. Although not the utterly broken model from the previous edition, the Wave Serpent is still a great vehicle on its own. And the limitation of it not being an assault vehicle has no effect on the Wraithguard who only want to shoot. Its capacity of 12 also allows you to run a minimum Wraithguard squad with a Spiritseer if you want.

For your second option, it’s time to call you’re weirdo cousin. We all have one. He’s kinda creepy, socially inappropriate, and you’re afraid of what’s he’s going to want in exchange for the favor. For Wraithguard, that means a call to the Dark Eldar. 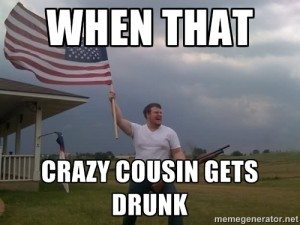 Your Wraithguard can be loaded into a Raider and deep stuck into battle. Now, while not the most well-armored of transports, the Raider is open topped allowing your Wraithguard to remain inside and fire out. And when firing out, you draw your point of fire from the hull. The size of the raider can let you straddle the side/rear arc of a knight, allowing you to bypass whatever side the knight puts his shield on. A nifty trick.

Alternatively, you can buddy your Wraithguard with an Archon or other character with a Webway Portal, allowing the unit to precision deepstrike. Now due to how units are bunched up after deepstrike, this isn’t ideal for the flamers. But a meld of all these options is to stick that allied Web Way Portal carrying dude in your Wave Serpent with your Wraithguard, and precision deep strike the whole vehicle. At that point, your unit can disembark and get in position for flamer template lovin’.

So now that you have a unit of Wraithguard in your transport delivery system of choice, what do you do with them? Wraithcannons theoretically perform better against Superheavies, GMCs, and models with an invulnerable save.  The big change when the Wraithcannon went to a D weapon wasn’t its firepower, but more its consistency of damage.  The math on this is too long for me to go into in this article, but what the D chart gives the Wraithguard is a more predictable damage output against vehicles, monstrous creatures, etc.

However, in an ITC environment, it’s essential to remember the modified D table:

If you’re playing in a tournament with standard book rules for D weapons, the Wraithcannon’s potential is more valuable.  However, with the chance of a 6 no longer removing a model outright, I see far more players giving the nod to the Scythes.  Scythes obviously can cover more models with their massed templates, and have the benefit of ignoring cover.   Even with them doing nothing on a 1-2 on the D tables, the Scythes are devastating against elite infantry, expensive deathstars, monstrous creatues, etc., while still remaining able to put significant hurt on superheavies and vehicles.

In the end, the Wraithguard are a pretty straightforward unit. They are incredibly short ranged, but pack a ridiculous amount of damage potential, kind of a Derringer model Desert Eagle. They’re a significant points investment, particularly needing a delivery system, but they have an excellent chance of eliminating whatever you send them to kill. I know having faced them for many years, they excel and ripping one giant hole in my battleline early in the game, then immediately drawing enormous fire, but by that point the damage is done.  And that last point probably deserves some comment.  Wraithguard draw fire, perhaps more than they actually deserve.  People fear the “D” and have an instinctual reaction to a unit packing massed D firepower.  I have seen many people pour considerable effort into dealing with Wraithguard, all the while ignoring more important, and more immediate, threats.

As always, let us know your thoughts on Wraithguard in the comments section! And, Frontline Gaming sells Games Workshop product at up to 25% off, every day!

The author totally forgets how easy it is for Assaulting Troops to get inside the 12″ range of the wraith guard weapons.

Then what ? It’s pretty hard to kill them in combat, bar very expensive assault units. Also in a war host wraith host formation the get six inch battle focus and will most likely they’ll re roll misses. Charging even non scythe guard get problematic . And of course there are the counter attack units to said assault units.

And of course, assaulting a unit of D flamers is pretty much suicide

And all that asumes they didn’t just add a character to give them hit and run. Which just makes them the gift that keeps on giving.

wraithguard are bulky and cant fit a full size unit (10) plus spirit seer inside a wave serpent.

also, D-scythes are not s2 ap2, they are sD and considered s4 for instant death purposes.

I really enjoy Wraithguard. I played the Wraithhost Formation and with auto battle focus at 6″, they were flying around the table, it was good fun.

And of course, the WWP D slap maneuver is beast mode.

Ad that point I wonder if you even need to worry about transports anymore.

I did not think wraithguard had battle focus?