Phat J here in my next installment of Blood Angels, Hot or Not? In this series we’re going to take an in depth look at the much maligned codex and figure out which units are worthless and which ones are worth taking a second look.  This time we’ll be looking at the second half of the Blood Angels HQ choices.

In my last segment of Blood Angels, Hot or Not? we took a look at the first half of the Blood Angels HQ choices.  Though it’s a shame for the players that the Blood Angel codex has an abundance of terrible HQ choices that they are presented with, it’s a great thing for an article writer trying to pad his series with some serious filler.  From the comments section of my first segment, I want to be clear that I am reviewing the HQ units in the codex in a vacuum, and not as how good they would be if they were in a squad of Dark Angel Black Knights or other such nonsense.  As usual, please keep in mind that these are just, like, my opinion man.  So without further adieu, Blood Angels Hot or Not? HQ part deux! 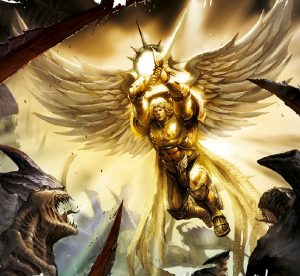 What has 3 wounds, toughness 4, and costs more points than a Leman Russ Battle Tank?  Why, none other than the Blood Angels’ own golden god, the Sanguinor!  Like most of the Blood Angels’ HQ choices, the Sanguinor looks pretty good.  He has a 2+/4+, a master-crafted S6 power sword with 5 attacks on the charge, and Eternal Warrior.  He has one glaring issue, though, that makes him completely unplayable and that is that he is NOT an independent character.  Hopefully that Iron Halo can fend off the mounds of Grav, Melta, and Plasma shots that will be heading towards his general direction.  He has the ability to buff nearby Blood Angels units with an additional attack, which is nice, but in an edition that horribly punishes all assault armies that aren’t Khorne Daemonkin, it’s fundamentally useless. 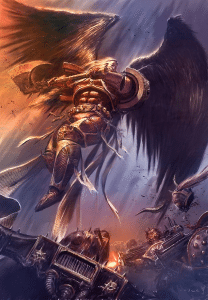 Some people might be under the misconception that I am entirely negative with this review so far, and that wouldn’t be an inaccurate statement.  That is, until now.  Enter Astorath the Grim.  Redeemer of the Lost.  Rocker of cockers all over your face.  The guy not only has a 2+/4+ save, he also brings Zealot to his squad, has a S5 AP 2 ax that has Killing Blow on a 6, and grants Adamantium Will to the unit he joins as well.  He really shines when put into a squad of Death Company, where he not only lets them re-roll their hits in the first round of combat due to Zealot but he also allows them to re-roll their wounds. 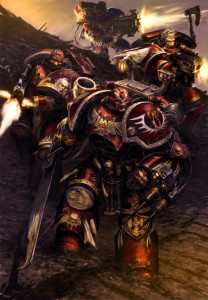 Sanguinary Priests are a bit of a mixed bag when comparing to the Sanguinary Priests of past editions.  On the plus side they gained a wound which was one of the worst things about the priests in the past.  The priests not only confer Feel No Pain to the entire unit they are joined with, but also increase their Weapon Skill by 1.  Sanguinary Priests also have access to wargear items and the Relics of Baal, which increases their usefulness by tenfold. One of the better items to issue a Sanguinary Priest is the Angel’s Wing, a jump pack that allows the priest and his deep striking unit the ability to re-roll the scatter as well as making any intercepting units snap fire at them. In the world of entire Tau armies getting Interceptor for 5 pts, this piece of wargear is essential to any competitive Blood Angels list.  The only downside to Sanguinary Priests compared to previous iterations is that they are now HQ options which limit the number you can take and the fact that they no longer confer a Feel No Pain bubble and only give it to the unit they are with. 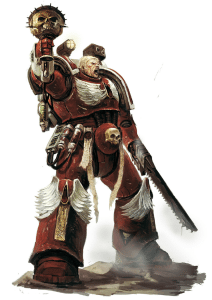 The hunkiest Space Marine ever to live, Brother Corbulo is a named Sanguinary Priest that comes in at double the point cost and three times the sex appeal.  The additional points buy you one more wound, a better BS for your Bolt Pistol, and I6 S5 Rending Chainsword (S6 on the charge), and the ability to re-roll one die at some point in the game.  His custom Blood Chalice, The Red Grail, grants the WS bonus to all Blood Angel units within 6″ as opposed to just the unit he is joined with.  To be honest, for his points I think Corbulo is a solid choice if you don’t have any important Deep Striking units.  If you plan on running an assault unit in a Land Raider than he’s your guy. In all other instances I would rather have two Sanguinary Priests with some custom kits. 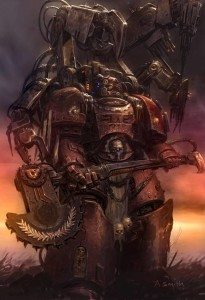 Since the Blood Angels got the Dark Angel treatment with their codex release, their Techmarines are still 1 wound HQ models. The only time you should consider a Techmarine as a legitimate choice would be if you wanted to tow one around in a Stormraven to try and increase it’s surviveability.  NEXT. 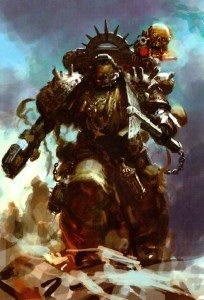 Ah, nothing wrong with going with a good old fashioned.   The Blood Angels Chaplain gives you all the goodies that a Space Marine Chaplain gives you but come with Furious Charge, making their attacks S7, which is nice. They lost some ground from the previous codex in that they are now an HQ choice, which like the Sanguinary Priests limits the amount you can take, as well as no longer allowing Death Company units to re-roll both their hits and wounds.  I think Sanguinary Priests are still a better choice than the Chaplain, but if you have the points a combination of both in an assault unit is a really solid way to go.

So there you have it, the end of the HQ segment of Blood Angels, Hot or Not?.  Next week we’ll start in on the troop choices for the Blood Angels (all TWO of them!).  Let me know your thoughts on the Blood Angel HQ choices in the comments!