Welcome back to another tactics article for Warhammer: Age of Sigmar. For more great articles like this one, be sure to check out the Tactics Corner!

Today, we’re going to be covering a warscroll that I know a lot of people want to know about playing with and playing against. There’s so much about this mythical model to cover that it’s going to take up an entire article. I’m talking about the First of the Stormcast Eternals, the Fantasy Primarch, El Queso Grande, Sigmar’s Pimp-Slap-Made-Manifest: the Celestant-Prime! 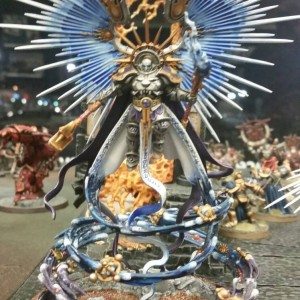 The Celestant-Prime is the epitome of a glass-cannon if I ever saw one. Unlike most models his size, he only has 8 Wounds, with a 3+ Save, which isn’t bad, per se. But his size makes him an easy target, and with very few rules that can be used for survivability, makes him vulnerable to Rending and Mortal Wounds. That said, his combination of wielding The Cometstrike Scepter and the legendary warhammer Ghal-Maraz makes him a storm of destruction, capable of wiping out entire units, Monsters, and sometimes half an army if played well. He can go toe-to-toe with a Bloodthirster, and win. Despite his amazing offensive stats, playing him is very tricky, and not clear-cut at all. Depending on the mission, he might be the assassin that kills your opponent’s Hero, or strike at the reinforcements that arrive, giving the rest of your army time to complete their objective. 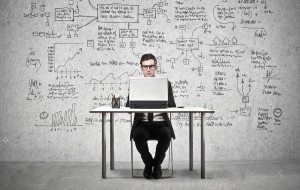 As mentioned earlier, the Celestant-Prime only has 8 Wounds and a 3+ Save, making him rather fragile against many different attacks. He does sport a pair of fantastic looking wings and an impressive 12” Move with the Fly ability, making him extremely mobile after he arrives. The Cometstrike Scepter he holds in one hand is a very powerful Missile Weapon, bearing a very respectable 24” Range, which is a long distance in this game. What makes this weapon good is that it only deals Mortal Wounds, not requiring To Hit or To Wound rolls. When you use this weapon, you pick a point within it’s range on the table, and roll a die. Any units within the number of inches rolled suffers D3 Mortal Wounds. Against armies that lack any sort of regeneration or replenishment, it is very strong to keep him back and just fire comet after comet into their ranks, forcing Battleshock tests and chipping away at their units, only to finally swoop in and start smashing their faces with Ghal-Maraz.

Ghal-Maraz is the other weapon he wields, and is perhaps the most devastating Melee Weapon in the game. It has a decent 2” Range, making it good to pick out those Heroes that try to hide behind the front line of combat, or to keep him behind your own forces out of harm’s way. It starts off with only 2 Attacks, which is not that impressive, but is very reliable with a 3+ To Hit and a 2+ To Wound. Finally, it has an amazing -3 Rending and 3 Damage, making even the strongest shields and armor look like wet toilet paper. Even models that buff themselves to a 1+ Save only end up with a 50% chance of negating the strikes. If that wasn’t scary enough, Ghal-Maraz gains 2 additional attacks for each turn the Celestant-Prime stays off the field, permanently. 4 attacks if he arrives turn 2, 6 attacks on turn 3, 8 attacks on turn 4, etc. 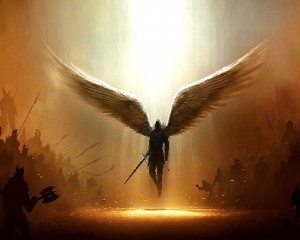 Retribution from On High

The Celestant-Prime is different from most models for two reasons: 1) He is literally the only model in the entire game that is limited to one per army; 2) He has to be set to the side instead of being placed on the table with the rest of your forces. Part of his “defense” is that he’s not out in the open to be shot at until you decide when the time is right. Retribution from On High is what makes this happen, and making the most of this ability is key to playing the Celestant-Prime effectively. It’s what allows him to aid any section of your army that needs help the most, or perform assassinations of key models buffing your opponent’s army. When placing the Celestant-Prime onto the field with this rule, be aware that it has to be at least 9” away from any other enemy models, meaning that your opponent can prevent an assault against their Heroes by carefully placing other units around them. Also note that the turn it arrives, all enemy units within 12” of it subtract 2 from their Bravery until end of turn, which is huge when paired with a timely assault with your other units or the Prime itself. 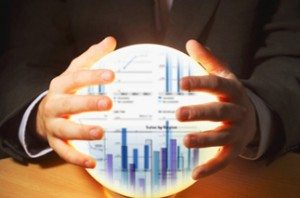 The final ability of the Celestant-Prime, it allows you to change the result of one die to any of your choice before modifiers each round. The options available to you with this ability makes him very flexible in his role. Make the Cometstrike Scepter an automatic 6” radius, make that Mortal Wound roll an automatic 3, turn one of the dice on the charge roll into a 6, get one more hit or one more wound roll to succeed, automatically pass the one save roll that would have killed him. I feel that without this rule, the Celestant-Prime would be mediocre at best. It’s what makes him a reliable assassin, only requiring one of the charge dice to be a 3 or better. It’s what allows him to be a reliable source of damage at range, hitting a large chunk of your opponent’s forces turn after turn with comets. Most of the time, you’ll use this ability for his offensive rolls, but there will be the one or two times where it will save him from a deadly assault. It even applies to dice checks caused by your opponent’s abilities. Neferata’s Dagger of Jet could instantly kill him if he rolls above his Wounds. Well, change the roll to a one, keeping him alive. Best of all, you don’t have to make the choice before the roll! It’s always reactive. 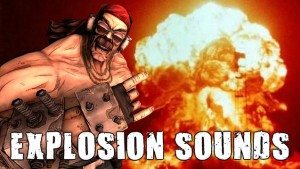 How to Use the Celestant-Prime

When I first looked at his rules, I thought to myself that the Celestant-Prime was intended for an assassination role, hunting down and killing the scariest things my opponent has. Believe me, he performs that job extremely well. However, my attitude has changed after playing many games with it, and I realize now how flexible he actually is.

The sweet spot for which turn to bring him in is between turns 2-4. Yes, he gets ridiculously powerful the longer he stays off the board, and seeing a -3/3 weapon perform 10-12 attacks is an awesome sight to see, but it’s unrealistic to pull off. Most of the time, turn 3 is when players see who has the momentum going for them. If you’re doing well without the Celestant-Prime, go ahead and hold him off a little longer. But if you are struggling, you should probably bring him in. He’s a lot like popping a cooldown in video games: timing it right can make the difference in winning or defeat.

The turn you bring him in also depends on what you need him to do. Despite being an absolute monster in close combat, he can do just as much damage staying behind your front lines, flinging comets around and weakening enemy units and combining your Orrery of Celestial Fates to maximise the area. Chipping away D3 Mortal Wounds from units each turn adds up, causing Battleshock tests and weakening them enough so that the rest of your forces can assault them without taking heavy losses. It only takes 2 lucky rolls for those Mortal Wounds to kill most Heroes in the game, as they tend to be around 5 Wounds. If you choose to go this route, I would suggest to bring him in on turn 2, allowing you to at least have 4 attacks on Ghal-Maraz, which is still not bad if you get into combat as it’s a potential 12 damage.

Sometimes getting him into a position to assassinate a model is too difficult to do. If that’s the case, he is still very good at clearing out units at a time, whether it’s down the center of their lines or from their flanks. With that, he is often not all by himself, unlike when used as an assassin. Firstly, you are likely close enough to receive buffs from your other Support units, like +1 to saves from your Lord-Castellant, +1 to your To Hit rolls from your Lord-Celestant on foot, healing or debuffs to the target unit from your Lord-Relictor, etc. Just one buff or two can make him just that much more dangerous. Secondly, he can surround himself with other units to keep him from getting overwhelmed. Thirdly, he draws attention to himself, forcing difficult decisions for your opponent to address him or not. Draw enough forces away from the objective, and you may be able to swoop in and claim it; if your opponent chooses to not deal with him, then they run the risk of the Celestant-Prime running rampant across the field and severely depleting their forces.

Finally, as mentioned several times already, he can be a strong assassin, taking down even some of the strongest models in the game. Whether it’s The Glottkin, Nagash, or the big bad Archaon himself, he can put the final nail in their coffins. However, to attack any of them head on at their full strength will be extremely foolish, as they are great in combat themselves. It’s highly suggested that you find ways to whittle away several wounds from them or remove any defenses they might have. Ranged units, counterspelling, killing units that surround them, mortal wounds, etc. Anything that can bring them down to the point where the Celestant-Prime has a very high chance to kill it before it can strike back is the goal. Turn 3 arrival is pretty good, turn 4 is even better, but only if you’re still in a good position at the time. The main goal is to either further your momentum in battle or halt theirs, and the Celestant-Prime has the tools to do so. 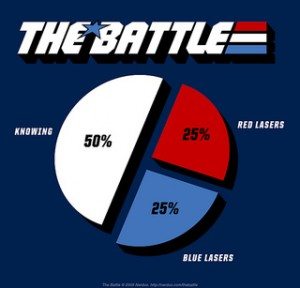 The Celestant-Prime is one of the prettiest models that I’ve had the pleasure to put together and paint, and is an absolute powerhouse on the table. He can clear units, bombard entire armies, or just move in and pimp-slap any model that needs it. If you can work around his fragility, he can match and exceed the damage output of any other warscroll out there. A truly great centerpiece to any Stormcast Eternal army!

Join me next time when we cover more of the units from the Stormcast Eternals faction, and shortly afterwards, we’ll cover the battalions that are available to them. As always, Frontline Gaming sells Games Workshop product at up 25% off, every day.