The formation that makes the Eldar actually good at air-to-air combat, rather than being the sad sacks they were previously, the Crimson Death! Check the Tactics Corner for more great articles.

The Crimson Death is one of the big new additions to the Eldar codex, and along with the upgrades to Crimson Hunters compared to last edition (such as their price drop), it brings the unit into a whole new focus for the game. While it might not be as runaway-powerful as the Wraithknight or Scatter Bikes are, it can fill a vital gap in the Eldar army, which otherwise has very few ways to deal with enemy flyers and FMCs effectively, lacking as they do any durable twin-linked weapon platforms to replace the Wave Serpent of yesteryear. 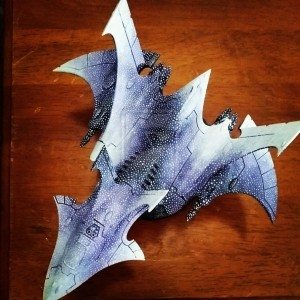 The Crimson Death is composed of three Crimson Hunter fighters, taken as separate units; as with the other Aspect formations, it can include one and only one Exarch, which is a mandatory upgrade. As usual, each of the Crimson Hunters has two Bright Lances and one Pulsar (S8 AP2 two shots), putting out an absolute torrent of low-AP firepower; if you’re willing to trade anti-vehicle for anti-MC/infantry, the Exarch may swap their Bright Lances for Starcannons as normal.

All Crimson Hunters keep their standard rules, most notably Vector Dancer (allowing them a free turn after moving in addition to before) and Skyhunter (letting them reroll pens against enemy flyers.) The Exarch also scores Precision Shots on a 5+, allowing him to pick off enemy weapons and occasionally characters if you happen to be firing at ground targets.

However, the more important bits are the ones that the formation adds in, since the Crimson Hunter by itself is actually a bit lackluster. First of all, the formation gets Preferred Enemy (Flyers and Flying Monstrous Creatures), which is pretty good- it’s virtually twin-linked for the regular guys, and it is twin-link for the Exarch, so you’ll land nearly every hit when taking advantage of it and their guns mean that you’ll be wounding with virtually everything as well, especially against the T5/6 stuff that predominates in the air. It doesn’t help with penetration rolls, of course, but since the Hunters are already excellent at that thanks to their own rules it does a great job of shoring up their offense against the thing they most need to be killing- a full formation of them should easily down a Hive Tyrant every turn even if it’s Jinking.

However, the real gold is in their second ability- the Crimson Death has a permanent 4+ cover save, and if you choose to Jink you can reroll all cover saves for the turn. With only AV10 normally the Hunters are typically quite fragile, but the constant cover save means that random Boltgun wounds are unlikely to bring you down anytime soon and means that higher-quality guns firing a handful of shots at you won’t make you Jink every time, just to be sure- while it nominally is a defensive boost, it functionally works as an offensive boost as well, keeping you active and on the field longer. If you actually are Jinking you will shrug off most everything coming your way- and note that it lets you reroll ALL cover saves, regardless of source. For those units that ignore Jink (like Dark Reapers and Sicaran Battle Tanks), you still have a 4+ (potentially rerollable) save against them, which is great insurance for when the worst happens. 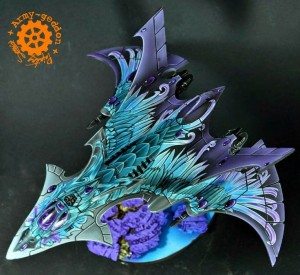 The Crimson Death is pretty much exactly what it says on the label- it brings a source of dedicated AA units to the party with no need for a tax or any other annoying factors. For any armies that have access to Eldar allies, it provides a very solid option if you’re worried about that sort of thing, and best of all it’s no slouch when firing at ground targets, either.

Like most airplanes the Death’s main advantage is in its survivability- and thanks to the 4+ cover, it feels a lot more like units like the AV12 flyers than it does the weak AV10 its raw statline tends to present. With the ability to double its save reliability when Jinking, most opponents will find shooting at the Crimson Death to be a very unpalatable option as the vast majority of weapons miss, fail to penetrate, or bounce off its save. With so many layers of defenses, very few weapons will be well-suited to shooting at them- Str 6+ Ignores Cover Skyfire weapons are not exactly common things in the game, even for the factions that have good access to those abilities.

The Crimson Death’s firepower obviously is optimized for firing at other flyers, but it can do work against other targets as well; Lances will tear up heavy vehicles and with Vector Dancer it’s quite easy to maneuver into the side/rear arcs of other vehicles to take advantage of those (or to bypass cover from terrain.) They are similarly good at picking off MCs and GCs or heavy infantry, where their excellent weapon profiles can once again shine. It’s mostly against horde armies where they will fall short, although the potential to snipe models means they hopefully won’t be completely useless. 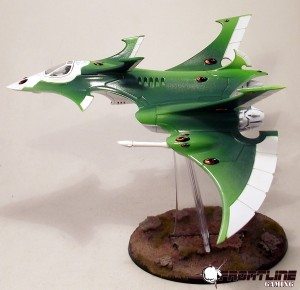 The biggest problems with the formation actually come straight from its unit type- as flyers they are forced to start off the board, meaning you are leaving 440+pts in reserve every game; moreover, lacking Hover mode they are never scoring units and thus aren’t helping you any to complete game objectives (maelstrom or otherwise) and thus can be a big drag on a list. If you’re looking to use the Crimson Death, you need to carefully consider whether or not your list can afford to have that many points not doing anything for the first 1-3 turns (dependent on your reserve rolls) and whether it has enough scoring potential to make up for their lack.

The reserve issue is also worth taking further note of- running a Crimson Death in an Eldar army gives you a strong incentive to bring an Autarch or Farseer with Divination (for Scrier’s Gaze) with you, or perhaps a Comms Relay if you otherwise have reason to need some free pieces of cover. 3+ reserve rolls are really easy to fail, otherwise, and the last thing you want is a quarter (or more!) of your army spending multiple turns off twiddling its thumbs- and since Eldar often have good reason to be playing the reserve game anyways, all of these options have plenty of other benefits to them as well.

The Crimson Death is a great option for a variety of armies that lack a strong AA presence and want to fill that niche, doubly so for Eldar, Dark Eldar, and Harlequins. It competes quite effectively with the Forge World options that fill similar roles (the Firestorm and Nightwing) and will almost always find uses against virtually any opponent, even ones not fielding aerial targets. It’s not a broken formation, but it is certainly one that is solid through-and-through and does a good job of shoring up the weaknesses of its component unit.

As always, let us know your thoughts and strategies in the comments section! And Frontline Gaming sells Games Workshop product at up to 25% off, every day!

The Crimson Death formation is excellent. They bring the pain, have vector dancer and solid defense. Not bad at all.

Still with the Hemlock pictures… 😉

The Crimson Death formation really is great, but yeah, you’re playing some dangerous reserve games. As I mentioned in the other thread on the Crimson Hunter, 3 fliers also seems to be a threshold where “A little bit of AA” ceases to be protection for your opponent.

I’m pretty sure those are all Crimson Hunters and not Hemlocks, dude.

There was a Hemlock, I swapped it.

Those are Crimson Hunters…

Your better off spending those points on hornets. They pack nearly the same firepower for cheaper. Most of he time your shooting at ground so they help with alpha strike and when it’s time to shoot in the air guide/prescience and your almost doing more damage per points.

Crimson Hunters are MUCH more survivable than Hornets and do a totally different job- even assuming rerolls, the Crimson Death is doing way more damage to air targets per point than Hornets are.

I won’t argue that Hornets aren’t a better unit, but you don’t bring them for the same purpose. Hornets won’t consistently shoot down Flyrants or Fire Raptors or Heldrakes; a Crimson Death will. Hornets fall to pieces against enemy Scatter Bikes and Missile Pods; the Crimson Death will not.