Phat J here in my first installment of Blood Angels, Hot or Not? In this series we’re going to take an in depth look at the much maligned codex and figure out which units are worthless and which ones are worth taking a second look.  This week we’ll be looking some of the Blood Angels HQ choices.

Ah the Blood Angels.  Once feared across the 5th edition battlefields for their fast moving, MSU style LasPlas Razorback spam, the Blood Angels have now been relegated to providing Drop Pods for allied Battle Brothers that don’t belong in them and providing the ‘x’ factor in arguments such as, “well you think that army is bad, at least they aren’t as bad as ‘x’”.  Unfortunately, the latest Blood Angels codex was released during the flaccid period of codex release time which consisted of the Blood Angels, Dark Eldar, Grey Knights, and Ork releases.  During this time, the codices were toned down in power levels for reasons unknown.  With the advent of 7th edition and the Necron codex, the power levels reached threat level midnight and the previously well balanced codices were shoved aside by the much more muscular and handsome ‘Decurion’ style releases.  It’s not all doom and gloom, however, as there are some really good units contained in the codex.  Today, we’ll be looking at the first set of your HQ options to determine which ones are hot and which ones are not. 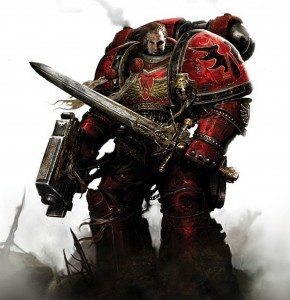 Captain – Your garden variety Space Marine Captain, boasting all the typical stats, the Blood Angels Captain is as about as remarkable as a typical Space Marine Captain.  This Captain comes with Furious Charge, however, so he’ll be slightly more dangerous on the charge with a power weapon.  Just like regular Space Marine Captains, he’s not remarkably good in combat and doesn’t bring any unit buffs to the table.  If you REALLY want to take a Captain with your Blood Angel army I would stick him with a Storm Shield and Terminator Armor into a unit of Assault Terminators to add 3 WS 6 attacks to the unit, which is cheaper than adding 3x more Terminators to the squad. 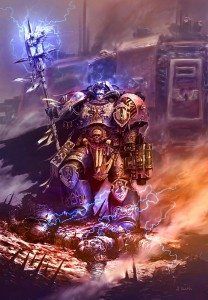 Librarian – Your standard Librarian but with Furious Charge and access to the Sanguinary psychic discipline.  The Blood Angel Librarian works really well as a unit buff for a close combat unit from the codex.  The Sanguinary psychic discipline is all about turning your characters up to 11 with a low warp charge tax.   Honestly, for the points cost I think the Librarian is the way to go 9 times out of 10 with a Blood Angels army.  You stick him in with a unit of assault Terminators or Sanguinary Guard and just demolish your opponent with extra attacks and initiative from his psychic powers.  The downside with the Librarian is that you are most likely going to have a small amount of warp charge dice unless you bring multiples of them, and even then you’re look at an additional 4 Warp Charges per turn. If you go against Daemons or Grey Knights expect your  powers to be shut down for the game. 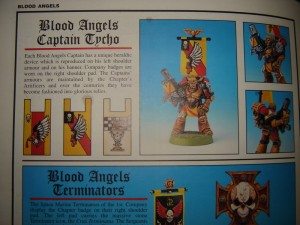 Captain Tycho – A Space Marine Captain with Artificer Armor, Tycho costs almost double the points cost of a regular Blood Angels Captain.  For these extra points you get a combi-Melta, Digital Weapons you can use for his 3 S4 attacks, and Hatred (Orks).  Like all Blood Angels Tycho has Furious Charge so he can be S5 on his charge, though for reasons he doesn’t have a CCW and cannot take one from the wargear section.  His Warlord Trait gives him Rampage so he can continue to pummel his opponents with his S4 attacks.  Tyco might be the worst named character in all of Warhammer 40k at the moment, but also has a late 90’s smaller than an guardsman model, so he has that going for him which is nice. 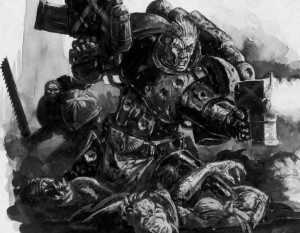 Tycho the Lost – Blood Angels players are spoiled for terrible HQ choices and Tycho the Lost doesn’t disappoint, though the Death Company version of Tycho is infinitely better than the regular version and is a little like Peter Parker in Spiderman 3 after he finds the Venom symbiote and becomes edgy.   He has one more attack, Rage, and Feel No Pain, but can only join Death Company units. This version of Tycho also doesn’t have a CCW or access to one which makes him almost completely useless since he is geared towards close combat in this version.  I don’t really understand why Tycho’s Dead Man’s Hand was left out of this codex but man is it sorely missed. 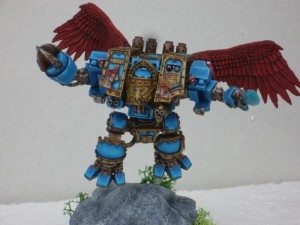 Fly Away with meeeee! On a magical adventuuuuuuure!

Librarian Dreadnought – One of the coolest, most unique units in the Blood Angels codex has the unfortunate luck of being a Dreadnought in the age of Grav weaponry and 1 shot D weapons.  With access to the Sanguinary Psychic Discipline it’s fun to think of the Dreadnought flying around on Psychic wings going all ham and shit at Initiative 7 but the sad truth is he is just one 6 away from being immobilized or a drop melta gun shot away from exploding on turn 1.  Yes, there are delivery methods such as putting him in a Stormraven but then you’re tacking on another 200 points and it might be a full 3 turns before it even comes onto the board, or you play a Tau player and their entire army intercepts the flier and you take a S10 hit on your back armor after its wrecked. OUCH! 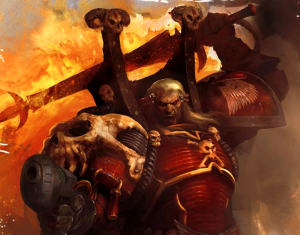 Mephiston –  At first glance Mephiston seems to have a lot going on for him.  Strength and Toughness 5 with a 2+ Armor Save, a psychic power that makes him S10, vampire eyes, Fleet, Furious Charge, the Lord of Death has the makings of a real tabletop hero.  When you start digging a little deeper, though, the truth of the matter is revealed.  Mephiston is a shockingly bad choice for a Blood Angels player.   Though he is titled the Lord of Death, Mephiston comes with no invulnerable save, meaning 3 wounds from plasma, grav, or melta will end his 150 years of existence.  Hell, even 3 6’s from an Eldar Guardian squad is enough to do him away.  Did I mention that he only has 3 wounds?  That stinks too.  To be fair he is at least now and Independent Character, so you can hide him in a squad of extra wounds with potentially Feel No Pain from a Priest, but at this point you’re adding on 200+ points to make him work for you.   Mephiston was a huge miss for Games Workshop. Not only could they have re-done his late 90’s model, but he could have been made into a real beast with an invul save, Eternal Warrior (the dude is the only one to have bested the Flaw) and kept his strength and toughness 6.  Unfortunately, he was caught in the GW toning down period and would have been a top dog if it wasn’t for the power of the post Necron era of 7th edition.  It pains me to have to say this, but ultimately Mephiston just doesn’t rank up.

So there you have it, part 1 of 2 HQ choices reviewed. It’s not a promising start for the Blood Angels, with 6/7 choices getting a ‘Not’ rating, though I’m not terribly surprised by the results.  This is, of course, my own rating of the units and you might disagree with me, which is your right and I would die to protect that right. But you would be wrong for doing so.

Next week, Blood Angels Hot or Not? HQ Part 2!