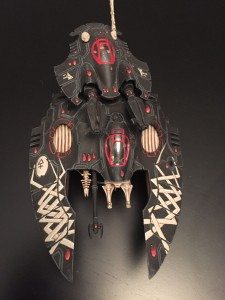 Today in the Eldar review series we look at one of the lesser-known vehicles, the Night Spinner.  Viewed as something of an oddity by the 40k community (“Huh? The Fire Prism is a dual kit?”), we’ll look at why that might be and whether or not ‘Spinners should have a place in your army.  And as always be sure to check out the Tactics Corner for more reviews and strategies to make your army hum!

Night Spinners are the finesse tanks of the Eldar battle host.  While the Fire Prism is available to punch enemies right in the nose, ‘Spinners drop death from above unsuspecting foes, shredding them to a bloody pulp with gossamer monofilament web.  The tank utilizes the classic Falcon chassis 12/12/10, fast skimmer, along with standard under-slung shuriken weapon options.  The Spinner is defined by its main weapon, a 360-degree turret-mounted Doomweaver which comes with two firing profiles:

Monofilament weapons wound off initiative rather than toughness, reflecting the weapon’s ability to slice through virtually anything lacking the quickness to scurry away.  Additionally any to-wound roll of ‘6’ becomes a bone-severing AP1.  Instant death still compares strength to the target’s toughness though so no doubling up Riptides.  And keep in mind that the dispersed mode is barrage and will excel at sniping characters in large units.

Night Spinners are also squadronable (1-3) and have a special ‘Monofilament Shroud’ special rule where they can all cross the streams to bury the unfortunate target in webby death.  In this case only one ‘Spinner fires its dispersed profile gaining +1S and +1 shots per additional model in the squadron that could have fired.  You don’t want to miss, however the Doomspinner gets a lot more frightening when it’s S8-S9 and able to instant-death a whole host of targets.  It’s advisable to consider taking a unit of two to reach the S8 mark.

They can also be taken in the Engines of Vaul auxiliary slot in a War Host detachment. 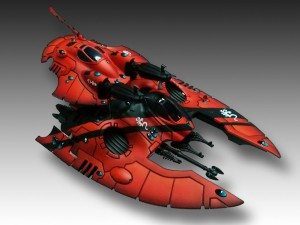 The first thing to know about taking Night Spinners is that they’re rather cheap at just 100 points.  That’s 25 points less than their cousins the Falcon and Fire Prism and even less than a Wave Serpent.  And since they have 48″ range and require no line-of-sight to fire, they can skulk around in the quieter places of the map relatively safe from harm.  This means that while other Eldar tanks are busy flirting with the 150-point mark after spirit stones and/or Holofields are factored in, the Night Spinner can be safely run in skinflint mode.  The option is there to upgrade the secondary weapon to a Shuriken Cannon, however its relatively short range makes it questionably compatible with the Doomspinner.

Aggressive lists may want to utilize the Night Spinner’s torrent firing mode which is capable of (sometimes) dishing out AP1 ignores cover wounds via torrent.  And in that case the purchase of a Crystal Targeting Matrix should be considered, as it allows the tank to move flat-out and fire at full ballistics skill once per game.  And on a fast skimmer with torrent virtually anything on the map is a potential victim.  Run a pair of these (and perhaps a crystal Warp Hunter for the D-template) and we’ve got a recipe for a solid alpha strike that dictates the opponent’s targeting priority on his next turn.  It’s unlikely that the opponent would prefer to spend turn one targeting cheap ‘Spinners but at that point they’ll have to. 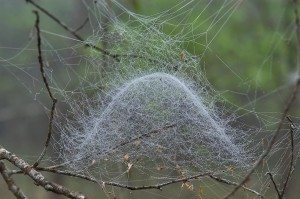 The most common task Night Spinners are assigned to though is that of a mobile artillery piece.  Deploying them in the corner of the map behind cover means they could spend the entire game acting as well, an immobile artillery piece or perhaps capturing local objectives.  As previously mentioned, these tanks are going to be fairly low on an opponent’s target priority list and will likely survive a very long time.

So what’s not to like here when the tank has so much going for it at a modest cost?  Why is the Night Spinner a rarity on today’s tables? For one the Doomspinner is a fickle mistress.  While it’s capable of threatening a wide variety of targets when it rolls 6’s to wound, it fares much less well when generating pain of the AP6 variety or when enemies are embarked in transports.  Strength 7 on a main tank gun doesn’t scare anyone even if it does hit non-front armor.  And then there’s the issue that the Doomspinner can’t be fired as a snap shot, relegating the unit to its secondary Shuriken weaponry.  The other Eldar tanks aren’t nearly as hobbled by having to snap fire.  You get what you pay for.

In all, Night Spinners are solid, if unspectacular tanks for their cost.  In matches where they have ample fleshy targets to slice up or bunched up vehicles to punish, they can be solid contributors deep into the game.  They’ll catch an opponent off-guard one match, sniping out key models or whittling down horde units…  then come back the next game when there are few viable targets and be reassigned on the fly to objective-grabbing duty.  They’re fun units to play though and can surprise their user as well as their opponent, try ’em out!

Posted on January 3, 2016 by zyekian in 40K, Review, Tactics, Uncategorized

I think the Night Spinners are excellent! They’re very good for the incredibly low points cost you get them at. They simply suffer from Eldar codex units: being good, isn’t good enough when you have so many amazing units.

Yeah, there are a lot of units in there that if there weren’t brokenly good alternatives you’d see them more often on the top tables.

Exactly. The Night Spinner is an excellent vehicle.

I thought all the night spinners go tot fire at once with the formation….mmm why did I lend out my elder codex:)

I like to use mine more agressive. It’s funny how no one expects the torrent flamer. The threat range is huge and it can seriously hurt bunched up infantry.