Necron Tactics: Formation: Conclave of the Burning One

You are here: Home › 40K › Review › Tactics › Necron Tactics: Formation: Conclave of the Burning One 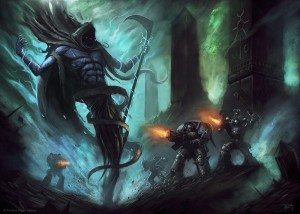 Hello all, Medicore Gamer here to discuss the Conclave of the Burning One. Have a hankering to field a shard of an angry caged ancient star god? Look no further, this is the formation for you. If you want to read up on more tactics check out Frontline’s Tactics Corner.

The Conclave of the Burning One is a formation that appears in the Shield of Baal Exterminatus, and is connected with the Mephrit Dynasty. But being an independent formation, it can be included in any Necron army, and you need not field a Mephrit Dynasty Cohort to have access to the formation. The formation is quite simple, it includes one C’tan shard, which can be the basic C’tan shard, or either of the named shards – The Nightbringer, and the Deceiver. The C’tan is accompanied by two Crypteks, and the three form a single unit, even though Independent Characters usually can’t join Monstrous Creatures. No other characters can join this unit, and no models may leave the unit.

While the C’tan lives, the opponent always uses the C’tan’s toughness when rolling to wound anything in the formation. In addition, the Forbidden Knowledge rule says that while both Crypteks live the C’tan has 5+ Feel No Pain, which is reduced to 6+ if only one Cryptek lives, and goes away entirely with the death of the final Cryptek.

This formation has access to all the artifacts from the Mephrit Dynasty, as well as the artifacts from Codex: Necrons. The first you should consider – and in fact the one that is an absolute auto-include – is the God Shackle. This item, from the Mephrit Dynasty, costs a mere 10 points and goes on a Cryptek. While that Cryptek lives, you nominate a C’tan and give it +1 strength and +1 toughness. Oh yeah baby, now we’re cooking with gas! 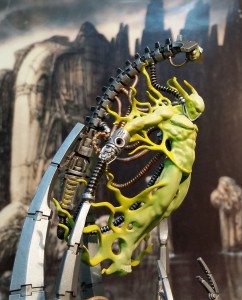 The God Shackle makes your C’tan toughness 8, which is huge. Because the whole formation uses the C’tan’s toughness value, the formation is now immune to small arms fire. Str 4 bolter fire now bounces off your unit, vastly improving its life expectancy. Even Str 6 weapons, which is the most common of the high strength firepower around, will only be wounding on 6’s.

Beyond the God Shackle, the Crypteks might want to consider a few other items. A Phase Shifter to give a 4++ to the Crypteks can help in keeping them around, which in turn keeps the 5+ Feel No Pain up on your pet star god. Additionally, it is well worth considering (in fact, near mandatory) a Solar Staff and a Veil of Darkness. The Veil allows the unit to deploy, then disappear and reappear among the enemy lines via deep strike. And being only a three-model unit, their footprint makes deepstriking a bit easier and less risky. The Solar Staff gives the unit a poor man’s invisibility, typically used on the turn the formation uses the veil, requiring enemies to hit them on 6’s in shooting once they drop in the backfield. And believe me, you pop an angry star god in your opponent’s backfield and you will be drawing fire – a lot of fire. You may be wondering if having a Solar Staff and the God Shackle is legal. It is. The relics from Mephrit are not categorized the same as the relics from Codex: Necrons. While it is true that you can only ever have one “Artefacts of the Aeons” on a model, and you can only have one “Relics of the War in Heaven” on a model, there is no rule stating that the same model cannot have both.

So what does this all run point wise? Well, let’s assume you run this with Nightbringer. The base cost of the formation is 370 points – the equivalent to a Knight Errant. A tooled up formation, with Nightbringer, a Cryptek with the God Shackle, Phase Shifter, and Veil, and the second Cryptek with Solar Staff and Phase Shifter runs 470 points. It’s costly, but it can be points well spent. 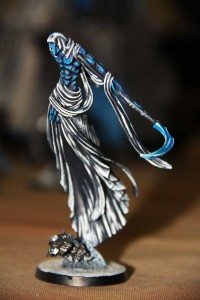 The biggest problem with the C’tan is they’re slow. They’re lumbering slow monstrous creatures without a transport who spend half the game trying to get into combat all the while being shot at with extreme prejudice.  Second, they’re only 4 or 5 wounds on a 4++ save.  This formation and the Veil solve these key problems. And this is also why Nightbringer is generally your best choice.

Nightbringer sacrifices a point of Strength and Ballistic Skill from a normal C’tan. But the God Shackle bumps him to Str 8 anyway. Most importantly, he comes with a fantastic close range ability: The Gaze of Death. This lets you choose a unit within 12″ and have them make a leadership test on 3d6.  For every point it fails by the unit takes an AP 2 wound that ignores cover.  If anyone took a wound the Nightbringer regains a lost wound.  While this ability occurs in the shooting phase, it is not a shooting attack. It doesn’t roll to hit and ignores any of the “aiming” rules for 40k, such as firing into combat, shooting at fliers, shooting at invisible units, etc. What’s more, Nightbringer’s ability to regain a wound from this attack can be used in conjunction with the formation to shift wounds around. Because everyone in the formation is a character, you can choose to Look Out Sir wounds from your Cryptek to the C’tan at key times, and Nightbringer can potentially get those back, thus keeping the Crypteks around a bit longer.

So what does a unit like this give us? Well, it’s effectively an 8 wound, T8 unit with 4++, 5+ Feel No Pain, that shoots 6 Str 5 AP3 shots (from the Crypteks), “shoots” a 3d6 leadership check that’s AP2 Ignore Cover , and in addition does one of the following random shooting attacks:

Then, of course, we have to consider the close combat threat posed by Nightbringer. He’s a monstrous creature with Fleshbane. On the turn he charges he’s doing 5 attacks at WS6 meaning he’s almost always hitting on 3s, and wounding on 2+ resolved at AP2.   And thanks to the veil and this formation, you just placed right in your opponent’s lap.

So, in sum, the Conclave of the Burning One is, frankly, the only viable way of bringing a C’tan in the current game. When properly equipped, the formation greatly increases the mobility and endurance of your pet star god. And while it is expensive, it can wreck enough chaos to be worth those points. It is also not so expensive that you can’t support it with other things. I will point out that a Decurion with a basic Reclamation Legion, two full six-strong Canoptek Harvest formations, and the kitted out Conclave only clocks in at 1685 points. That’s a whole lot of early turn pressure applied to your opponent.

← The 5 Most Bad Ass Characters in 40k!
Daily Awesome Conversion →

17 Responses to “Necron Tactics: Formation: Conclave of the Burning One”