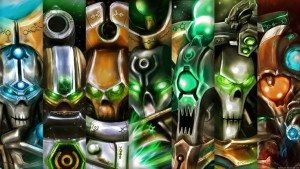 Oh, hello there, I didn’t see you come in. My name is Scuba Steve, today I am going to talk to you about a very important subject, kicking ass on the table-top. Primarily, how to do that with the big man, himself… Anrakyr, The Traveller. Though seldom seen, it’s best to not be fooled, he is a rough and tumble kind of man, with a piss-poor attitude and something to prove. As always, for more great 40k articles, make sure to visit Tactics Corner!

The Big Man on Campus

Alright, let’s talk seriously for a few moments… Anrakyr isn’t the most popular of the Necrons HQ choices, the reason for that is he benefits your army in such a way that can be perceived as inconsequential. However, Anrakyr does have a few fantastic abilities above and beyond your average Necron Overlord and some really dirty tactics that make him a force to be reckoned with. First, lets take a good look at the man’s Wargear, Special Rules, and Warlord Trait: 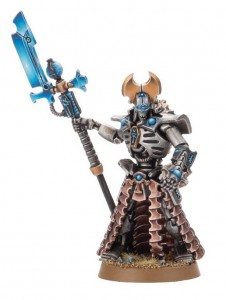 Okay, let’s break it down into two categories: what is “Good” and what is “Just Okay”…

Tacyon Arror (Just Okay): This is an Assault 1, 120″, Strength 10, AP 1 weapon. Which sounds awesome, however, it has a glaring downside… it is a “One use only” weapon. This means that as soon as the big man shoots it off, he has no ranged weapons. Additionally, it is clear, based on Anrakyr’s other wargear and his Warlord Trait, that he is built for close combat. Firing this weapon into a squad of guys isn’t the best move. With that being said, it is nice to use this weapon to take a pot shot as a vehicle and hope to kill it from across the table, though not overly reliable, it can be a nice cherry on top of your already awesome robotic sundae.

Warscythe (Good): This, ladies and gentlemen, is where the magic happens. Though Anrakyr doesn’t have any real ranged weapons, his close combat weapon is off the chain. The Warscythe is a two-handed, +2 strength, AP 2, Armourbane weapon. Anrakyr already has strength 5, with the +2 boost to Strength 7, it makes it so he almost always wounds other characters on a 2+ and the Armourbane makes it so he rolls two dice to penetrate vehicles with his attacks! He is the universe’s greatest multipurpose hand tool. Now, the greatest thing about this weapon actually lies in what’s missing from it’s profile. The fact that a weapon this powerful isn’t unwieldy means that it will always strike before those pesky power fists and thunder hammers (this is major because most characters that will reliable hurt Anrakyr, and the rest of your Necron army, will be sporting weapons like that).

Counter-Attack/Furious Charge (Good): Even though Necrons aren’t perceived as the greatest close combat army in the game, the additional of these special rules really make Anrakyr hit like a freight train. Especially the Furious Charge; because he has a base strength of 5, he goes to strength 6 on the charge and then strength 8 with his Warcythe. This means he can easily Instant Death Eldar/Space Marine HQ’s and bring some serious pain to your opponent’s vehicles (even Land Raiders). Additionally, if a unit charges him, he gets an additional attack because of the Counter-Attack special rule. (Note – Anrakyr doesn’t gain +1 strength from Counter-Attack, just the additional attack)

Mind in the Machine (Just Okay): This is more hilarious than it is good. Essentially, this is your consolation prize for Anrakyr not having a gun. During the shooting phase he can select one enemy vehicle within 12″ of him and randomly select on of it’s weapons on a 4+ to shoot at a unit of his choosing. Whilst being really cool, the fact you need to randomly select a weapon to fire means that this becomes very unpredictable. Your best choice is to target vehicles with fewer amounts of weapons (a Space Marine Vindicator, for example) making it much less random. The nice thing is that, if you do this, Anrakyr doesn’t count as firing the weapon, the vehicle does, which means that you can fire whatever weapon you end up possessing at any target and then Anrakyr can assault a totally different target. Though unpredictable, it does provide you with some options.

Pyrrhian Eternals (Good/Just Okay): This is a double edges sword. On the one hand, it makes a unit of Necron Immortals the perfect posse for Anrakyr to roll with by granting them Furious Charge and Counter-Attack. This means that you can place Anrakyr in a unit of Immortals and they become a serious hammer. The draw-back to this ability is that it only functions on a unit of Immortals, which means, if you’re not taking a Reclamation Legion, you will have to take a unit of Immortals to reap the benefit of this ability (which you may not have previously done).

Implacable Conqueror (Good): This Warlord Trait gives all friendly units within 12″ of him Relentless and Crusader. This is important for two reasons: 1) it actually makes the Immortals you want to take with him a viable assaulting unit because they can fire their Rapid Fire weapons and charge afterwards. 2) The Crusader ability, though rarely seen, is awesome because it allows you to run using two d6 and taking the highest (which can really speed up your slower Necron units if they need to run onto an objective or simply move up the table). Additionally, it lets you add d3 to your Sweeping Advance roll, which is huge for Necrons because of their modest initiative score of 2. Suddenly, your Necron units could be winning combat and actually sweeping advance your opponent, which is a serious game changer.

That was a lot to digest, but don’t worry, once you get Anrakyr on the table-top, all of his special rules flow easily into one another and you’ll have it down in no time.

We all agree, he’s a badass… but how do we use him?

Using a character like this can be challenging, but don’t panic, he is much simpler to use than he looks. Unlike your Robotic shooting machines that excel at holding objectives and shooting your opponent to death, an HQ like  Anrakyr really favors an aggressive mindset. Take him and ram him up your opponent’s nose, see how they deal with that. The issue is getting him across the table, so here are some good ways of getting him to where he will do the most damage: Night Scythe. You’re at the mercy of reserve rolls, but once on he and his Necrons Immortals can be placed anywhere on the table.

Additionally, you could take him in the Decurion Detachment (which makes him so much tougher) and use him and the Immortal squad to defend your back line objectives versus your opponent’s Deep Striking units. Anrakyr and his Immortal posse will obliterate combat squad units of marines after they’ve left the safety of their Drop Pods.  Note – Anrakyr, The Traveller replaces the Necron Overlord in the Reclamation Legion Formation.

You could also use him in the Royal Court Formation (replacing the Necron Overlord) and form an enormous super-unit of all your Necron HQ units and the Immortals that Anrakyr selects to gain Pyrrhian Eternals special rule; this is a very, very scary unit.

Ultimately, I think the best way to use Anrakyr is inside the Decurion Detachment. Using him to patrol your back lines, score objectives, and keep your opponent from jumping into your deployment zone is a fantastic use for him. Additionally, if he is preying on smaller, deep striking units he is relatively safe (You never want to sacrifice the Slay the Warlord point, so keep him close to home).

Why do we never see him?

The main reason you never see him is cost. He is the price of TWO Overlords. Combine that with an aggressive play style that some players may not be uncomfortable with and a lack of reliable ranged weaponry, it is easy to formulate reasons why it is just easier to purchase one Overlord and put those extra points into Canoptek Wraiths. Ultimately, the wraiths and Anrakyr have a similar army role and when you compare them side-by-side, it becomes clear that wraiths are the go-to close combat unit in the Necron Codex.

As I do with every Article I’ve written, I am sending out a challenge to all the Necron players  out there! Take Anrakyr off the shelf and put him on the table, he is a great warlord and really generates a different way of playing the army, which is always interesting and exciting. Test it out! You may just fall in love with this lonely traveler. As always, Frontline Gaming sells Games Workshop product at up to 25% off, everyday!