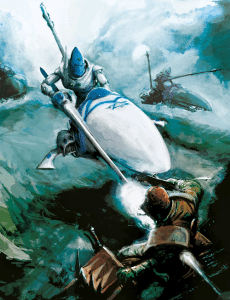 What’s good fellow gamers?  Mr.MoreTanks to talk about those other Jetbikes in the Eldar Codex, no not the Jetseer Council, those aren’t even actual Jetbikes, I mean the legendary Shining Spears.  When the Eldar’s highly controversial “Dull Swords” Aspect Temple folded up, the Shining Spears swept in to skewer the enemy’s of Khaine!  Be sure to check out the Tactics Corner for more great articles and bad jokes.

The ever forgotten Aspect Temple, Shining Spears weigh in at a hefty 75 points for 3 Spears.  Other than the higher Toughness from being on the bike, these war fighters roll with the standard Aspect Warrior stat line.  These guys come with the classic well known Eldar speed.  Anyone who’s played a game against Eldar knows the insane flexibility and maneuverability of Eldar Jetbikes, and how perfect they can be for securing late game Objectives.  Moving dozens of inches in a single turn while retaining the ability to score an Objective is an invaluable trait, particularly in the ITC. 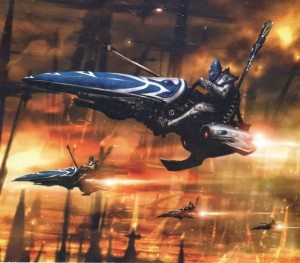 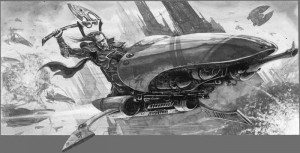 Well there’s something that we have to acknowledge right off the bat, and that’s that this unit does not have the tools nor the teeth to fill its intended roll within the codex.  Which is a shame, because the idea of an assault unit on Jetbikes seems awesome, ah well, a good tactician doesn’t lament his lack of tools, he adapts and overcomes.  The issue is that these Shining Spears don’t have grenades, which severely limits our options for targets.  Assaulting units in cover really isn’t an option, and the units we want to be attacking have the potential to crush these guys if they are swinging before the Spears.

Now that the concerns and things to watch out for are out of the way, let’s focus on what to do with these riders.  Our guns are either weak or short ranged, so we shouldn’t be afraid to Jink to keep our Shining Spears alive.  So what are we hunting for?  MEQ (Marine Equivalent) or weaker MSU (Multiple Small Units) for sure are the way to go, though vulnerable or low wound Monstrous Creatures are very viable units as well.  Think Carnifexes, Trygons (preferable wounded), Demon Princes, Ghostkeels, and the like.  These targets aren’t a pushover, especially only having 3 bikers, and let’s be honest, you’ll probably only have 3 bikers if not less, go in carefully.

Getting to these units can be an issue, Outflanking is an option, but not one you really want to consider unless you’re opponent is bringing in Drop Pods.  Starting on the board makes us a little more vulnerable, but honestly, the rest of your army is more than likely going to be a WAY higher priority for your opponent than these bikes.  Using your speed and hugging the edge of the board will be key to your survival, additionally, Skilled Rider will be your friend, so use it.  Tucking into ruins and out of line of sight is always a solid course of option.  The Outflanking can be useful when you need to access an isolated and out of the way Objective, especially from units like Scouts, another enemy Windrider Jetbike unit, something along those lines.  Obviously you can’t assault out of Reserves, but hoping out right next to the unit and hiding near them to charge them next turn is a good option. 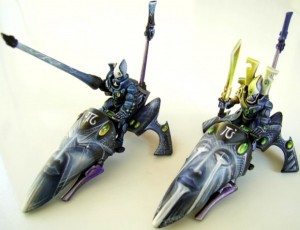 Keeping away from durable and dedicated assault units is a must, they will absolutely crush you.  Big blobs and units that don’t succumb to Morale are also poor targets as well since the Spears lack the hitting power to clear out these units and since they don’t have Hit and Run you will lose the war of attrition.

The synergy of the Shining Spears with other units from the Craftworlds book just might be the strongest aspect of their codex.  The Spears pair well with Warp Spiders, Swooping Hawks, or other units that play aggressively and force the opponent to react to them.  Really there aren’t any bad units, just some that are far more useful than others.  The whole goal is to make the Shining Spears a low priority target for your opponent while still putting the Spears into a position where they can be significant to the outcome of the game. Like the others though, these guys perform well in the Aspect Host detachment, which is an auxiliary detachment in the Warhost. The boost to BS or WS and the rerolls to leadership tests the formation offers is a big boost to these speed daemons.

Beyond the obvious, there are some other strengths to these units.  Being extremely fast gives them the ability to reach out and snag secondaries is always something to be looking for when building lists to win.  In the ITC, and really just any game, being able to move vast distances in a single turn to hold or contest an Objective is an invaluable trait.

The biggest issue however is that anything you’d want to do with this unit can be done far more efficiently by cheaper or better units within the codex.  That’s a reality that simply can’t be ignored; honestly, taking Shining Spears isn’t your best use of points nor whatever from of Detachment or Formation.  Still, if you’re going to take these guys, you might as well make the most of them.  Don’t expect them to take on your opponent’s army head on like a large portion of the Eldar codex can, you’ll be disappointed.  Adapt and overcome gamers, and may the dice be ever in your favor.