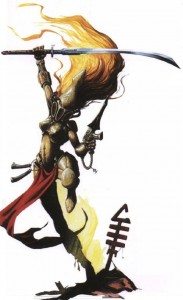 Welcome back readers to another installment of Frontline Gaming’s review of the Eldar Codex.  Today I’ll be reviewing the Eldar’s screaming ninja warriors: the Howling Banshees.  For more reviews and tactics articles make sure to check  Frontline Gaming’s Tactics Corner.

It seems like in every codex Games Workshop writes there is always at least one unit that just don’t quite cut it compared to your other choices.  It doesn’t mean these units are bad per se, it’s just they just don’t really give you a reason to take them outside of appreciation for the model or the fluff instead of something else.  Predator tanks for Space Marines and the Vespid for Tau are good examples.  These units aren’t Chaos Space Marine bad, but you just never see them because there are just better choices available.  For me that unit in the Eldar Codex is the Howling Banshees. 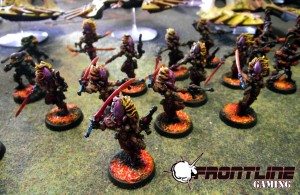 Who are Those Girls Making So Much Noise?

Howling banshees carry the basic Eldar Aspect Warrior stat line.  They are base WS/BS 4, T/S 3, I 5, A, 1, W 1, LD 9, and a save of 4+.  A minimum unit runs five deep for 65 points and you can add up to 5 more for 13 pts each.  You can upgrade one member of the squad to an Exarch for 10 pts.   A Howling Banshee Exarch has the same stat line with +1 to his WS/BS, attack, and wounds.  Overall they are fairly priced for that stat line, the Wargear they come with, and their Special Rules.  But if the price is fair why am I down on them you ask?  Well price is just one component in evaluating a unit.  The second, and probably more important, question is can I use them for a useful purpose in my game?  I’ll explain why I think the answer is “no” in detail below.

Each Howling Banshee comes with a Shuriken pistol, Power Sword, and Banshee Mask. That’s a good equipment load-out for a high initiative close combat squad.  The Exarch can exchange her Power Sword for a Triskele (12″ S3 AP3 Assault 3/ S user AP3 Melee) for 5 pts, decent, or an Executioner (S+2 AP2 two-handed)  for 10 pts, decent.  She can also exchange her Pistol and Power Sword for a pair of Mirror Swords (S user, AP3 Melee, Master crafted) for 10 pts; again, decent.  The unit can purchase a Wave Serpent as a dedicated transport.

The Banshee Mask has a long and storied history in 40k, the current rendition the Banshee mask causes fear, and a unit that contains at least one Banshee Mask cannot be shot with Overwatch.  That’s good for a T3 model with a 4+ save especially with Tau and Dark Angles out there in the meta. Fear is whatever–half the time we forget to use it–but when it works it is actually quite good. 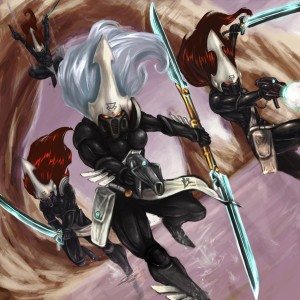 Aspect Host– If you take your Howling Bansees as part of the Aspect Host formation they gain the ability to re-roll failed fear, pinning, and moral tests which is great.  You also have the option of pumpining up every unit in the formations WS or BS by +1.  WS 5 on a close combat unit is great as you will hit on way more of your attacks which is important for Banshees as they don’t take a punch too well.  However unless you are taken a lot of units of Banshees or Stricking scorpions in your Aspect Host you are likely choosing to pump the BS of your Warp Spiders, Fire Dragons, or Dark Reapers.  BS 5 on a Shuriken Pistol is largely wasted. 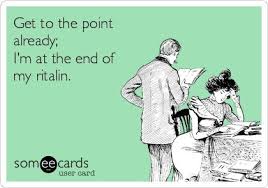 So if I like the price, stat line, Wargear, and special rules why don’t I like Howling Banshees?  Well I never said they were bad, it’s just I’d rather have units that take the same slot.  Howling Banshees are good.  A unit of 10 stock Banshees has 30 ap 3 attacks on the charge striking at Initiative 5 for 130 points.  Usually, the issue with assault units is they can’t get to the target fast enough.  That’s not an issue for Banshees on foot because they are really fast with their special rules.  So what is the problem?  For me they are just too squishy and they don’t hit hard enough.  That unit of 10 with 30 attacks on the charge only kills 5 marines on the charge (assuming WS4) and only kills roughly 3 marines if they do not charge, primarily because they are only S 3.  That’s not bad but it’s not amazing, and it is certainly less than what a unit of Warp Spiders or Dark Reapers will do to those Marines.  Of course you unit of Banshees is also not very likely to be at full strength by the time the  charge.   At the end of the day if you run them on foot there is a high likely hood that your opponent will have an opportunity to be in close range and shoot at them before you get to assault.  Full squad of marines double tapping you with just their bolsters sees 4.5 of your screaming ninjas bite the dust.  Banshees will do better against T3 opponents, but those opponents usually bring more to shoot you with for that turn when your close and exposed.  Transports don’t really help the Banshees either.  If you are in aave serpent you have a) made the unit expensive as a whole and b) you still need to sit for a turn close to the enemy to be shot at.  If you steal some assault vehicles from your Dark Eldar Ally you are in a paper thin boat that will kill a bit more than 3 of the Banshees on average every time it explodes. No thanks, I’d rather take Dark Reapers, Swooping Hawks, Fire Dragrons, or Warp Spiders in my Aspect Host or Eldar Army.

But if they are good in a vacuum there must be an” ok” way to run them even if there are better choices, right?  Yes, I suppose.  If I were going to run them I would take 3 units of 5-10 (which at a minimum only costs you 195 and at max costs 390) in an Aspect Host (If I’m allowed to bring more than 1 Aspect Host or if I’m not going to take advantage of the Aspect Host for a shooting unit) to pump them up to WS 5.  Then run them on foot and charge across the table.  You will do well with WS5 against small basic troop units and you will be applying pressure on your opponent almost immediately, allowing your other units to operate a bit more freely.

Also worth noting, is that taken as a part of a War Host, they automatically run 9″ due to Matchless Agility + Acrobatic which is pretty dang awesome! Makes these ladies faster than greased lightening.